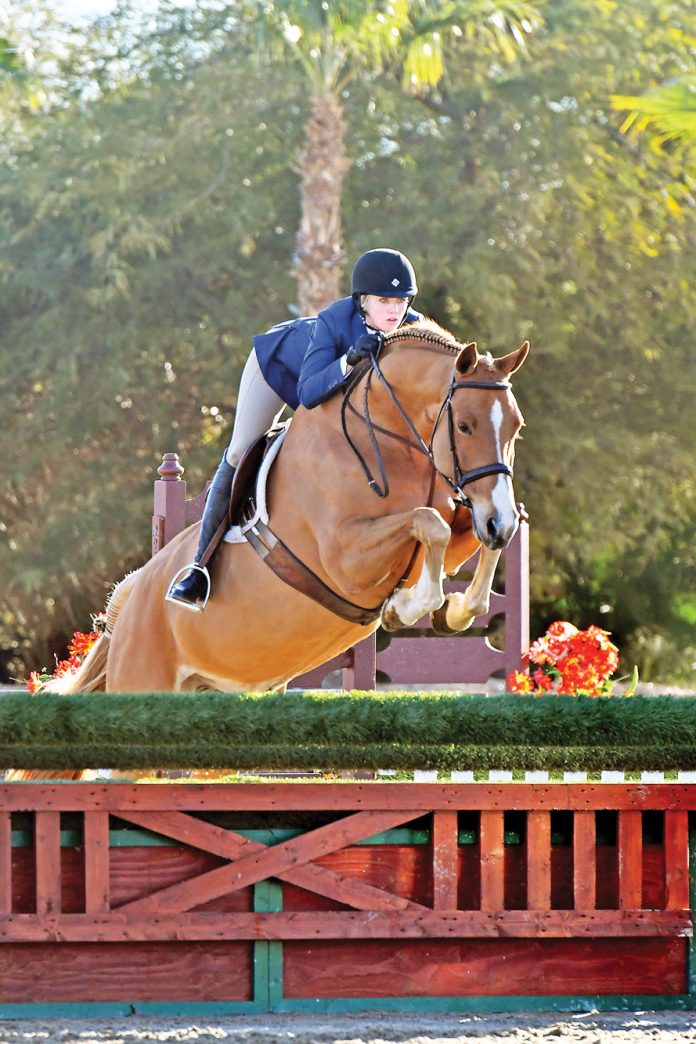 We all make mistakes. But horse people, as a group, aren’t always the best at handling them. So TPH reached out to some top riders to share their own show ring bloopers to prove, once and for all, that these mistakes really do happen to the best of us!

In 2019, I was fortunate enough to qualify to ride in the WCHR Peter Wetherill Palm Beach Spectacular.  I was so excited as it would be my first time riding under the lights in International ring at WEF. I was lucky to get to show a horse I had shown previously in California and had later been sold.

I trotted in and went directly to work. The first half of the course went lovely. I rounded the turn to the last part of the course and there was a rather spooky jump in the corner. My horse started to spook a little, and I panicked and kicked him hard … and he promptly spun me off.

Obviously, I was disappointed, but it was a great learning experience about why it is important to give your horse a tour of the arena when competing in evening classes or derbies!”

I was at a horse show a long time ago on a First Year horse. We came through a turn to an outside line and the horse spooked and ducked out.

The way the horse ducked out, I fell off onto the standard, and the back of my jacket hooked onto it. The standard was between the flap of jacket and my back. So, I was hung up like a scarecrow and they had to lift me off of it! I was dangling a foot off the ground. It was pretty embarrassing, but it all worked out and I got off.

That was one to remember! You couldn’t have done it twice. These things happen to everybody. Keeps it interesting.”

I was showing at Capital Challenge in what was then the First Year Green division. I went in the first round and my round was pretty good. I think I scored an 82. My horse could be a little suspicious the first time around and hold his breath a bit. But he won a lot of classes and I thought we had a good chance to be competitive there.

He warmed up great for the second round and I was confident we could score much better than we did in our first trip. He trotted in super relaxed and I picked up a nice forward pace. This round the first jump was the only new fence. A vertical along the rail.

We got to the fence in what I thought was the perfect spot. He came off the ground and I was thinking I had it. He was gonna purr around this time! He threw his feet back down on top of the boxes and quickly scrambled in reverse. I cleared the vertical and landed with my reins in hand. I stepped back over the demolished vertical and ran my stirrups up to lead him out. The crowd was yelling something at me so I turned back and realized he stepped on his fake tail during this whole thing. It was now laying in the dirt at the scene of the crime!

I turned him around and we went back for it. It was a long walk out … reins in one hand and his fake tail in the other!”

Years ago while working at Windrush Farm for Melanie Smith as a very young professional, I had an oops. I had the opportunity to ride a horse in the Intermediate Jumpers (1.40m). I was so excited! Little did I realize he had an issue with combinations.

Well, he did: He jumped A, jumped B, then in one giant stride, covered the two and jumped C like a 1.40m water jump! I got left waiting for that second stride, landed in front of the saddle, wrapped my legs around his skinny neck and jumped the next three jumps on course sitting straight up riding his neck!

I stayed on to ride another day, but with a bit of laughter following me out of the ring. The horse went on to have a great Grand Prix career once his front feet got sorted out.”

Hear more It Happens moments on the #Plaidcast.

*This story was originally published in the February 2021 issue of The Plaid Horse. Click here to read it now, and subscribe for issues delivered straight to your door!