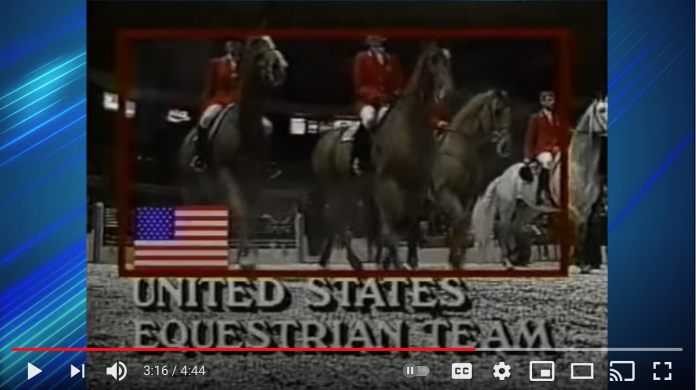 Any professional will tell you: You can learn simply by watching. At a venue like WEF, you can get a free masterclass by taking in almost any FEI event: U.S. stalwarts Beezie Madden, McLain Ward and Kent Farrington, as well as European stars Martin Fuchs, Daniel Deusser and Henrik von Eckermann are just some of the blockbuster names competing in Wellington this winter. It doesn’t matter where you are: If you’re not at the show, you can turn on the livestream.

Our predecessors weren’t quite as lucky. Far fewer classes were broadcasted or streamed over the Internet, as such technologies, if they even existed, were far more expensive and not as readily accessible.

YouTube, however, has become quite the documentarian, offering a glimpse into U.S. show jumping history. We’ve collected some of the sport’s greats that, decades later, you should still be watching—and learning from.

Widely considered to have retired the most successful rider in U.S. show jumping history, Rodney Jenkins found his success in both the hunter and jumper rings, dominating the show circuit from 1960 to 1980. A true horseman, he went on to have success training racehorses after leaving the horse show industry in 1991. Jenkins was inducted into the Show Jumping Hall of Fame in 1999.

Bill Steinkraus is another legendary name in show jumping, capturing the covered individual gold medal with Snowbound at the 1968 Summer Olympics in Mexico City—the first U.S. rider to achieve the feat. In all, he boasts four Olympic medals.

Steinkraus should be every amateur rider’s hero. After graduating from Yale in 1949 (following a stint in the cavalry branch of the U.S. Army, with whom he served during World War II), he worked as a businessmen while pursuing the 1952 Helsinki Games.

The first American woman to win an Olympic medal in equestrian competition, Kathy Kusner was truly a pioneer in equestrian sports. After all, she was also the first licensed female jockey. Kusner contributed to a gold medal for Team USA at the 1963 Pan American Games as well as a team silver medal at the 1972 Olympic Games in Munich.

Joe Fargis truly made history at the 1984 Olympics; he captured both team and individual gold aboard the legendary Touch of Class. A tremendous teacher and clinician, Fargis is also known for producing countless horses and riders out of his Sandron Farm. He even gave back to his sport as a committee member of the American Horse Show Association (USEF’s predecessor), USHJA and USET. This video from the ’84 Games includes brilliant commentary from Steinkraus, as he beautifully articulate’s Fargis’ style and tells his co-commentator, “I know that it’s not right to root, but I’m tired of being the only [U.S.] individual gold medalist.” He wouldn’t be for long.

How about a horse? Gem Twist is the only equine to have earned the American Grand Prix Association Horse of the Year title a remarkable three times. The Thoroughbred gelding, bred by Frank Chapot, shined under the tutelage of three riders: Greg Best, Leslie Burr-Howard and Laura Chapot. With Best, the gelding received his three silver medals—from the 1988 Seoul Olympics (individual and team) and the 1987 Pan American Games. Gem Twist was also named the “World’s Best Horse” at the 1990 World Equestrian Games.

If you look closely, you’ll still find Michael Matz at the ingate, as his children Alex, Lucy and Robert all actively compete in the sport of show jumping. Matz won at least one major show jumping event in 20 consecutive years, an incredible feat and demonstration of longevity. In that span, he also received a remarkable 12 medals across the Olympic Games (team silver), World Championships (team gold, individual bronze and team bronze) and Pan American Games (Among his eight medals are five golds—three team and two individual). Like Jenkins, Matz retired from the sport and entered the racehorse industry, winning the 2006 Kentucky Derby with Barbaro and the 2012 Belmont Stakes with Union Rags. He’s also widely considered to be an American hero, having rescued four children from United Airlines Flight 232 when the plane crashed at the Sioux Gateway Airport in 1989. Of all the American athletes in the 1996 Olympic Games, Matz was chosen to carry the U.S. flag at the Closing Ceremonies.

Mothering a Horse-Crazy Child: When It All Comes Together