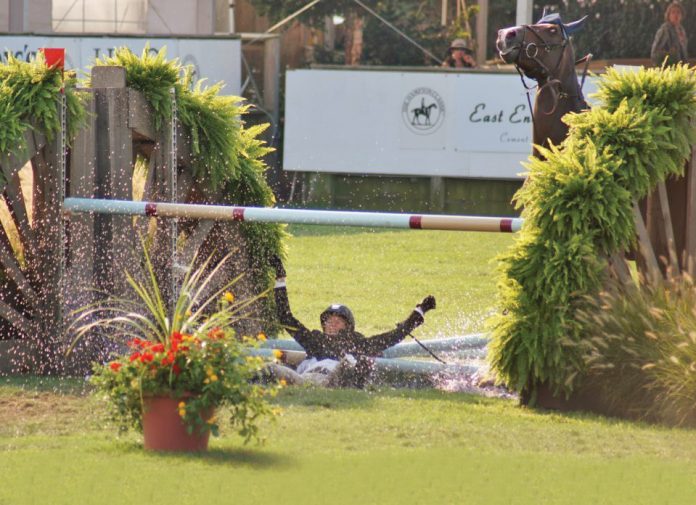 We all make mistakes. But horse people, as a group, aren’t always the best at handling them. So TPH reached out to some top riders to share their own show ring bloopers to prove, once and for all, that mistakes really do happen to the best of us!

I was in first place at the Hampton Classic Young Horse Championship on a 5-year-old named LaCongo. We were coming to the final jump on the course. In a split-second decision, I decided to try to save time by jumping the liverpool instead of the oxer. The horse had always been a solid competitor despite his young age, and I thought it would be within his talents to jump the water. Unfortunately, he came off the ground, spooked at the water beneath him, and put his legs into the bottom rails. I flopped off, didn’t win the class, and learned the following lesson: Discretion is the greater part of valor.”

A fear of mine when showing in the rain is not having enough pace—it is not uncommon to ride conservatively when showing in a downpour. You want to make sure your horse doesn’t slip or lose confidence, and the splashing as they canter around is just plain distracting.

As I walked into the ring at the Duke “AA” Jump for the Children’s Benefit show in Raleigh, NC, I was determined not to make the mistake of allowing Heir Apparent to get behind my leg in the rain. I pick up the canter and catch a nice jump to a single headed towards the gate. After jump one, I say to myself, “Go straight, get the lead change, then step on the gas.” I am loving the feeling of cantering in the rain with some pace, so I get distracted and continue stepping on the gas.

As I come out of the turn, I realize I am at the end of my stride and hope I am able to find some reasonable distance to the first line. Nope! I see a long distance and, at that point, I choose to squeeze harder. Heir Apparent is very scopey for his size so I thought I would take a chance. He left the ground, but on two or three legs; he flailed a front and hind leg. We land into the line crooked, I lost my reins, and I had to ask him to add out of the line.

I finished the line laughing because this is an excellent example of how horses humble us and remind us how a rider may win one day and lose the next. This was a complete pilot error and I’m sure the score was a 50.”

The one thing you teach kids when they start to ride jumpers is never cross the timer before the tone. I was in the International Ring at Spruce Meadows, and I was so nervous that I wouldn’t get to the first jump in the 60 seconds (this was some time ago—it’s 45 seconds now) that I broke the timer in my warmup circle, then jumped clear. I had no idea that I actually had a stop and a lot of time faults.”

*This story was originally published in the March 2021 issue of The Plaid Horse. Click here to read it now and subscribe for issues delivered straight to your door!

After the Sale: Heartburn or Afterglow?