Home Blogs Hunter Hack Raising Them Right: How Elzabeth Lampert Brings up the Next Generation of... 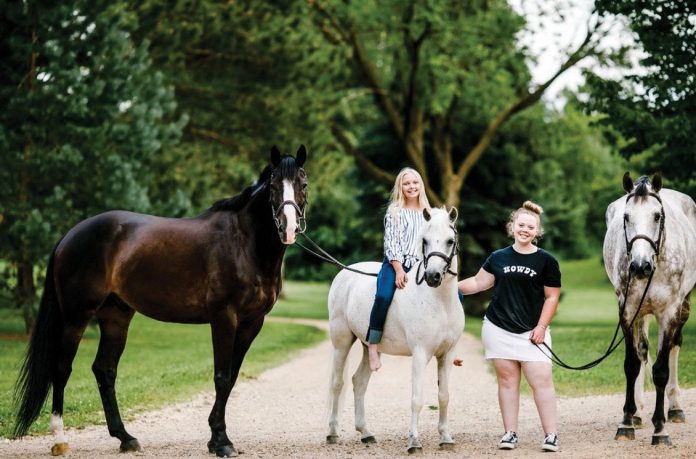 When interviewing young people, it’s not unusual to have to help pull the words out of them or string together their sentences, which is why Zoe and Ivy Lampert are immediately impressive.

At 16 and 11, respectively, the sisters are able to articulate their thoughts better than many well beyond their years, and they speak confidently, even to someone they’ve only just met.

As the sisters separately share their stories, it’s apparent that their maturity is a positive credit to their upbringing and to their mother, Elzabeth Lampert. The owner and head trainer of Arbor Hill Farm, a full-service hunter/jumper training operation based in Hugo, MN, Elzabeth has dedicated her life to bringing up riders. And, if her two daughters are any indication, she’s doing it right.

“I’ve learned so many life lessons, like how to treat people, from watching my mom,” Ivy told The Plaid Horse. “I’ve learned a lot of responsibility and being able to care for an animal. Most of my friends are all from riding. This sport has just brought me so much.”

Added her sister Zoe, “I’m so lucky to have the relationship that my mom and I do. I wouldn’t want to do this sport with anybody else.”

Back to Her Roots

Elzabeth herself was brought up in Minnesota by a passionate horsewoman, Beth Miner. Miner played a significant role in the formation of the United States Hunter Jumper Association (USHJA), and in 2008, she was named the recipient of the USHJA Lifetime Achievement Award.

As Miner’s daughter, horses were in Elzabeth’s blood, and she was on a horse before she could walk. As a junior and amateur, Elzabeth trained with Colleen McQuay and Peter Pletcher before eventually working briefly for Jack Towell.

“I’d transitioned to working for Terry Brown in Georgia when a family friend suddenly passed away,” said Elzabeth. “It was a bit of a scare, and I thought, ‘I don’t want to be 1,500 miles away from my family anymore.’ So, I moved back home, and shortly thereafter, I took up a job for a local barn.”

It wasn’t long after returning to Minnesota that Elzabeth decided to combine her love of horses with her desire and passion for educating young people, and, in 1994, Arbor Hill Farm was born.

Elzabeth’s training operation soon grew into a booming business, spending six to nine months of the year on the road at horse shows. At the time, it was a lifestyle that Elzabeth enjoyed and that helped Arbor Hill Farm to thrive, but in 2005, Elzabeth decided it was time for a change. At 35, she had just had her daughter, Zoe, with then husband Scott Lampert, and she felt a need to restructure.

“I wanted to be able to be home and let Zoe know my parents and things like that. I had to reinvent my business model,” said Elzabeth. “I had had a string that I went on the road with, and I had an assistant trainer that stayed home and did all of the local shows. When you have kids, some people are able to do that still, but it just wasn’t quite the speed that I wanted at that point.”

“Family and school were always really important to me, so I wanted to structure my business a bit more around that. I kind of got off the carousel.”

Raised at the Barn

Now 15 years later, Elzabeth has found a balance that allows her to get back on and off the carousel while successfully raising Zoe and Ivy and continuing a thriving business.

“The benefit of being at home has been being able to support the local show industry,” said Elzabeth, who served as the president of the Minnesota Hunter & Jumper Association for three years. “I really worked hard to try to rebuild the local industry and the local support, because I think without it, we aren’t going to have anything.”

It was at those shows local to the Midwest that Ivy and Zoe first started competing, with the decision to continue riding always left up to each of the girls individually. For Zoe, the interest in riding and competing never wavered. For Ivy, her love for riding was rekindled following a few years spent out of the saddle.

“I kind of wanted to start going on my iPad a little bit more,” said Ivy, marking one of the few, funny comments that give away her young age. “I actually found a love for dance, and I danced for almost two years. Then, I walked up to my mom one day and realized that I wanted to ride again.”

Today, both girls are immersed in horses, and, along with their mom, they’re loving the horse show life.

“We’re a posse; we go everywhere together,” said Elzabeth. “Ivy is at the age where she’s perfectly content to ride and play. If I never made her ride with a saddle at home again, she’d be the happiest camper in the world. I love that. I’ve always said that you get out of it what you put into it. So, if what you put into it is fun and playfulness, then fun and playfulness is what you get out.”

For Zoe, that fun is now coupled with a more serious role within the family business. After she began taking an interest in the managerial side of the operation two years ago, Zoe became a highly involved working student for her mom. Today, she helps manage much of the day-to-day operations, from feed orders to the scheduling of vet appointments to assisting in the creation of the farm’s new website.

“She’s great with the horses, and she’s really good at the bookkeeping side and the technology side of it that is way beyond me,” said Elzabeth. “She also likes the sponsorship and branding facets of the business. I’m really lucky that she has that interest and wants to do those things. I can honestly say, she could probably go manage almost anybody’s barn and do a good job of it. At 16 years old, that’s really cool.”

While Zoe’s alarm generally goes off at 5:30 a.m. and her days can be long, she’s grateful for every opportunity that she’s had as a working student.

“I’ve gotten to do so much with the horses,” said Zoe, who is currently a sophomore in high school, which she attends virtually.
“I don’t even know if it’s what I want to do in my future, but right now it’s everything that I could have dreamed of.”

For Ivy, her role has also brought a sense of responsibility and a level of maturity – just two of the benefits of being brought up in the barn.

“You learn so much in this industry – not even just about horses, but about everything like dealing with people,” said Ivy.

While the positive benefits far outweigh the negatives, all three of the Lamperts are also quick to identify the difficulties that come with growing up or raising daughters in the hunter/jumper industry.

“It’s a very judgmental industry,” said Elzabeth. “Clearly, I was never a tall person. I’m 5’1” maybe on a good day with big hair. My girls aren’t going to be tall, and they are not size 00s. Both of my girls have really good self-esteem, but it’s hard sometimes to watch that get beat down.”

Separately from her mom, Zoe cites a similar answer as the toughest part of growing up in the sport. “You have to be super strong to be able to do it, because there’s always going to be judgement.”

With that in mind, Elzabeth continually prioritizes teaching her girls to be proud of who they are and comfortable in their own skin – and not just in regard to appearances.

“For somebody like Zoe with a mom like me, even though I’ve ‘been there and done that,’ I still can’t afford to put her on two small juniors, two large juniors and a junior jumper,” said Elzabeth. “But what she sees on social media or when she opens up a magazine is that it is all about the kid that does have all of those animals. We talk a lot about how not to be jealous in an industry where there are so many people that it’s easy to be so jealous of. I want my girls to be proud of what they have accomplished.

“I never want them to not feel comfortable doing this sport,” added Elzabeth. “If this industry ever made them feel like they couldn’t do this, I would probably stop horse showing. We have fun even just going on road trips to pick up a horse in Omaha and drive it to St. Louis, laughing and joking around and learning about each other. I want it to always be that enjoyable.”

For Elzabeth, that means teaching the girls to focus on all that they do have and to realize that just because one person’s goals may look different than another’s, they are in no way less significant or meaningful.

“My goal isn’t for my girls to look at someone else’s scenario and wish for the $400,000 hunter,” she said of her daughters. “My goal is for them to look at that and want to make the most of whatever horses they’re riding.”

When it comes to her clients at Arbor Hill Farm, Elzabeth takes the same approach as she does with her daughters.

“Today, I’m very focused on individual goals,” she said. “I think it’s so much more important to identify what is really right for each person. I spend a lot of time with each client trying to make those goals work, no matter what they may be. Whether someone’s goals are on the local or national level, there shouldn’t be judgement one way or the other.”

Having spent significant time showing and training in both capacities, Elzabeth was often surprised by the comments she received from those who seemed to look down on her decision to focus more locally or from those who were surprised to see her back at major horse shows across the country.

“Just because I stepped off the carousel for a while doesn’t mean that I can’t still get on the carousel,” said Elzabeth. “I think it was healthy for me to step off, and I’m proud of what I’ve done. I have a really great group of clients and horses, and my hope is that they set their short-term and long-term goals and are gracious and kind to themselves in that process.”

“I want everyone I work with to be able to feel good and proud of what they accomplish. My greatest pride and joy are my girls and seeing them enjoy the sport.”

And, as Ivy concluded, for herself and for Zoe, that feeling is mutual. “My favorite thing about riding is training with my mom.”

*This story was originally published in the April 2021 issue of The Plaid Horse. Click here to read it now and subscribe for issues delivered straight to your door!