Home Blogs Barn Lounge From A-List to “A” Rated: Celebrities You Might Find at a Horse... 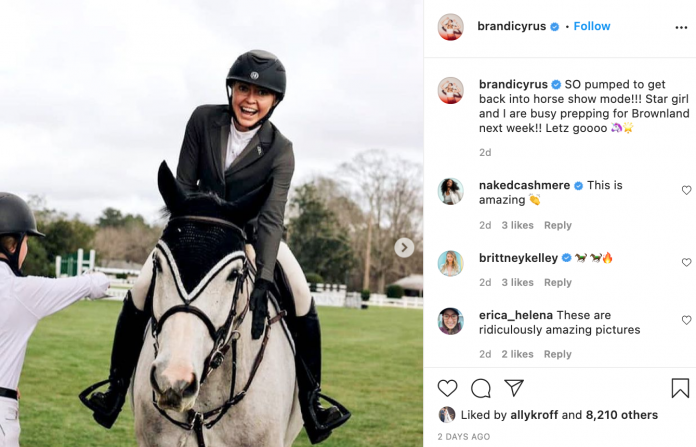 “Celebrities: They’re just like us.” At least, that’s what they say.

There’s certainly no denying the power of horses, and over the years, more than a few A-Listers have taken the reins with success, citing riding as a competitive outlet from the pressures of Hollywood. And at the horse show, you’ll find little fanfare surrounding these actors and actresses, singers and songwriters, fashion moguls and models. The horse show has firmly established itself as a place for celebs to trade in their blockbuster titles for one that we all share: equestrians.

Blink, and you might miss them, but we’ve collected the names of some popular figures that you just might see next time you head to the show ring.

The former “Big Bang Theory” star starred in and produced the HBO Max series, “The Flight Attendant” this year, which earned her a Golden Globe nomination, among others. But when Kaley Cuoco isn’t running her production company, Yes, Norman Productions, she’s in the barn, frequenting the west coast circuit with her string, trained by Tracey Wade. It was at the Desert International Horse Park (then known as the HITS Thermal show grounds) that she met her now-husband, international show jumper Karl Cook. Cuoco has repeatedly vocalized her desire to be known at the show as a respectable rider that loves her horses; the actress title can come secondary.

What can’t Mary Kate Olsen do? In the limelight since she and twin sister Ashley debuted on the television series “Full House” at six months old, Olsen has achieved success throughout the entertainment industry. She co-founded the production company Dualstar as well as the luxury fashion brand, The Row. She even co-authored a book, Influence.

Olsen began riding in her youth and returned to the show ring in her adulthood; in 2019, she won a CSI1* 1.25m event at the Longines Global Champions Tour of Chantilly. She has regularly competed on the New York Circuit as well as in Wellington, FL.

An actress, singer and DJ, Brandi Cyrus is from a family laden with musical talent—see father Billy Ray and sisters Miley and Noah—and horse sense.

A former event rider, Brandi entered the horse show world when Noah took up lessons with Far West Farms in Los Angeles, CA, in grade school. While Noah stepped away from showing to focus on her music career, Brandi kept going and now rides and trains in Tennessee. She showed at the World Equestrian Center — Ocala this winter with her adult amateur jumper, Starpower.

While the legendary Bruce Springsteen is not among the entries at horse shows, he can regularly be found in attendance, cheering on his daughter, Jessica, who recently was named to the short list for the U.S. Jumping Team for the upcoming Tokyo Olympic Games.

Jessica rides professionally for Rushy Marsh Farm and has recorded wins at the five-star level across the globe. Bruce has supported his daughters pursuits and chaired the USET Foundation’s “Take Me to Tokyo” gala alongside his wife, Patti Scialfa.

Supermodel and actress Chrissy Teigen announced her “journey into the horse world” in January 2021, an activity suggested by her therapist (We approve of the suggestion). And when Teigen needed support breaking in her new tall boots, the horse community—including the Plaid Horse Adult Amateur Lounge Facebook group—was there to help.

Teigen is still getting to know her new horse, but we hope to see her on the circuit soon!

My therapist says I need something that I do for just me, as I have absolutely nothing currently lol. Today begins my journey into the horse world. I hope this dude likes me 😩 he’s so handsome and appears lazy, I love pic.twitter.com/1Ytejb4L6J