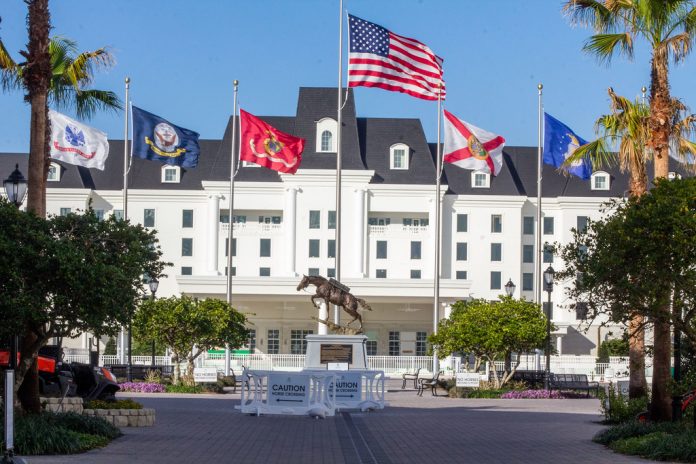 Yesterday, we looked at the 2021 Devon Horse Show cancellation through the lens of game theory. But that hasn’t been the only game played this year. Today, let’s use game theory to understand decision making in the equestrian industry using the model of a cooperative game and the concept of Nash Equilibria.

Last week, the World Equestrian Center (WEC) announced they were no longer offering United States Equestrian Federation (USEF) rated shows. This is a big move. Why did it happen?

While I am not affiliated with management and have no knowledge of the inner workings of either organization, I believe that the lens of game theory can help us to better understand why each organization is making the decisions it is.

At the start of 2020, USEF and WEC and Horse Shows in the Sun (HITS) were all in equilibria (defined as a stable condition in which no side can make a move that will improve their outcome). At that time, the only facility WEC had completed was theirs in Wilmington, Ohio. All shows there were USEF rated. This equilibrium was good for both parties: USEF made money on fees and memberships. Wilmington was given an authoritative show position for awarding points, a growing local market from which to profit, and complied with standards from the National Governing Body to the Olympics. And HITS Ocala had been running strong for decades in an equilibrium with USEF for all these same reasons. USEF made their money on fees and memberships, shows were given the authority to award points and draw USEF members—equilibrium.

The pandemic broke the equilibria for HITS, WEC, and USEF, but that is not the disruption dictating this story. But the pandemic disruption affords WEC the opportunity to get involved and host the 2020 Capital Challenge Horse Show to rave review, rescuing them from cancellation. Remember this as we continue.

Opening WEC Ocala was a calculated effort. After over five years of construction and planning, growing USEF membership all over the midwest, hundreds of horse shows, and writing checks for hundreds of thousands of dollars of horse show fees in Ohio, WEC broke the equilibrium in Ocala with a facility costing on the order of half a billion dollars. HITS, the veteran in Ocala, had run thousands of USEF shows over nearly 50 years of running rated horse shows not only in Ocala but also around the country. For them, and competitors, a new player in town changed everything.

In its 2021 opening year, WEC Ocala requested and planned for 12 weeks of USEF-sanctioned shows. However the negotiations actually went, USEF did not sanction the WEC winter circuit.

It could be interpreted that USEF wanted to maintain the same outcome they had in 2020 and prior by assigning dates with mileage rule contingencies to HITS alone since that has produced a desirable outcome for the last four decades. To improve their own outcome, WEC found a different governing body to sanction and regulate its events by connecting with the NSBA.

Like many others, I wanted to take part in everything exciting that WEC Ocala offered. I instantly became an NSBA Life Member. I am also a USEF and USHJA Life Member—I’m not going anywhere.

Following Winter 2021, WEC still desired USEF-sanctioned events, so they continued to apply for dates. USEF could improve their outcomes with more shows, and so agreed to sanction their Ohio dates per usual and assigned Ocala five horse show dates in the summer. While it may look like a new equilibrium has been established through the end of 2021, recall that game theory says a stable Nash equilibrium only occurs when no player can improve their outcome with a unilateral change.

This left a problem with the equilibrium in Florida. WEC Ocala’s 12 week NSBA winter circuit demonstrated that:

None of these were a given until WEC Ocala tried. But they saw they could improve their outcome by having more shows, even if those shows were not USEF rated. When they went back to the negotiation table for the rest of 2021, the scales had tipped in their favor.

Then another disruption entered the market when the 2021 Devon Horse Show was cancelled. WEC saw an opportunity to improve their outcome by declaring their intent to offer an alternative show for qualifiers. This has precedent in that it’s similar to when they hosted both the Capital Challenge in 2020 and the 2020 North American League (NAL) Championships. For both of those shows, both USEF and WEC benefitted. USEF was able to continue a stable schedule of top rated shows for their members and WEC showed the very best of the sport that they could host a world class horse show.

This year, WEC’s solution to hosting Devon would also improve USEF’s outcome since USEF has a void in revenue from the loss of Devon 2021. WEC running a show in similar entry and competitor size and scale would likely improve the outcome for USEF.

A lack of decision in a timely manner led to WEC being required to cancel their attempt to be an outlet for Devon. With the relationship between USEF and WEC already strained from the winter, it’s probable that it was the deciding factor for WEC pulling away from USEF and fully adopting NSBA.

But in this game, both sides didn’t lose. WEC realized they could win on their own, and they are. With fewer and fewer USEF sanctioned competitions, USEF members watch our collective outcomes diminish in value. We’re losing too. And the odds we’ll keep working to collect points to qualify or earn year-end awards decline over time, further diminishing the financial and long-term health of USEF.

Does Game Theory teach us a way forward which could benefit both USEF and the members? It certainly reveals what happens when USEF fails to act—multiple missed opportunities to host valued championships. Who in leadership is responsible for these missed opportunities? One can look up the chain of command to USEF’s CEO, who just happens to be pocketing a $400,000 salary per year to advocate and serve us, the members. Are “we” the members really protected or “ensure[d] a fair and level playing field for all competitors” by USEF’s apparent inability to act?

USEF should start playing the cooperative game to be a part of the future of our sport, a future that benefits its members at every level. For my sake. For your sake. For that girl who has stars in her eyes after her first three lessons at camp and wants to do this for the rest of her life. For the member who is turning in their amateur card to take the plunge to go pro. Collaboration benefits everyone.

Let’s hold USEF accountable to be the organization for all of us, not just the old boys’ club farting around behind closed doors while allowing our sport to be merely a shadow of what we deserve it to be. In 2022, let’s lead an environment of collaboration and stop falling into ego traps.