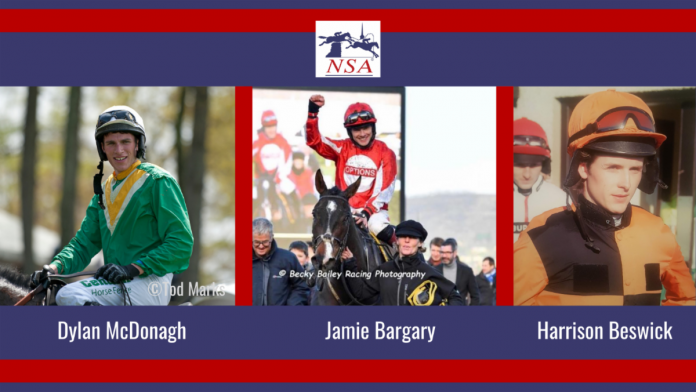 Three new riders have joined the National Steeplechase Association ranks for the 2021 season — and hopefully beyond — thanks to a new program designed to make it easier for freelance riders from abroad to travel to and work in the U.S.

Dylan McDonagh, who rode in 19 races on the NSA circuit in 2015 and 2016, is already stateside, and made his return at last Saturday’s Queen’s Cup Races in North Carolina. He has two NSA wins on his resume.

Joining Dylan this weekend will be fellow Irishman Jamie Bargary, who has four scheduled mounts at the Middleburg Spring Races in Virginia on Saturday, including aboard Irv Naylor’s Amschel in the featured $75,000 Temple Gwathmey Stakes.

Next week English rider Harrison Beswick, 25, who lives in Lambourn but calls the Cotswolds home, joins his mates. Both Bargary and Beswick qualify to ride at Saratoga this summer because they meet the minimum of at least 15 career wins. Neither of the two have ridden in the U.S. previously.

Bargary, 26, has been a professional jockey for four years, riding in England. He has 97 career jump racing wins. Among his achievements are the Imperial Cup at Sandown and the Grade 2 Albert Bartlett Trial. He’s had six winners at Cheltenham Racecourse, including Splash of Ginge in his first Grade 2 steeplechase.

“It’s an opportunity that arose and I thought it would be silly not to grab it with both hands,” Bargary said of his U.S. adventure. “I’m looking forward to learning a different style of jump racing and broadening my riding profile.”

Based in England throughout the winter primarily riding for Oliver Sherwood, Richard Bandey, and Beswick Brothers Bloodstock, Beswick also rode in France for five years for top trainer Emmanuel Clayeux. He has 32 career jump racing victories and cites the Hexham National and Grand Cross de Lyon as two of his particularly notable ones.

“America had always been on the cards for me,” Beswick said. “Before I started race riding, I did a summer riding track work in Saratoga and nearly stayed. Time just feels right to start now.”

All three jockeys are riding on the NSA circuit thanks to a partnership with the Steeplechase Jockeys Association of America Immigration Services Inc., an organization founded by amateur rider and Maryland Steeplechase Association board member Forrest Kelly.

Kelly said the goal of the program is to make it easier for small trainers to have access to qualified jockeys from abroad. The process can be complex, difficult, and so costly that only large-scale owner or trainers can justify the expense, which entails taking on the rider as an employee tied to the stable.

“Last fall, we saw there was a big need to get freelance riders here that aren’t tied to any one owner and trainer,” Kelly said. “Small trainers without the financial support just can’t justify it.”

Stella Buckingham Wins the Top Prize in The American Tradition of...