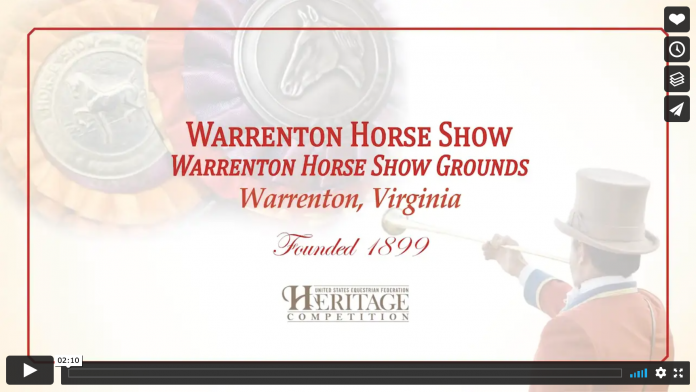 This competition year, more than 2,000 USEF-sanctioned horse shows will take place across the country. Just 33 have received the prestigious designation of being a Heritage Competition.

A US Equestrian Heritage Competition is defined as one that has “been established for a long period of time and [has] made substantial contribution toward the development and promotion of the sport, both within the broader community, by achieving, maintaining and promoting the equestrian ideals of the sportsmanship and competition.”

Heritage Competitions are appointed via strict approval process that involves recommendation by the Federation CEO and approval by both the Federation Affiliate primarily represented by the competition and the Federation Board of Directors. Excluding an “Act of God interruption” (see: global pandemic), any competition seeking Heritage Designation must run for at least 25 consecutive years, among a host of other requirements.

The USHJA has a Vimeo channel that showcases Heritage Competitions with displays at the USHJA Wheeler Museum in Lexington, KY. We’ve collected some of them below:

June 15-20, 2021
Founded in 1926, the Ox Ridge Charity Horse Show has become known for its open jumper classes over the years. The Wheeler Museum has on display footage from ABC’s Wide World of Sports’ coverage of the 1962 event.

July 27 – August 1; August 4-8, 2021
The Blowing Rock Charity Horse Show was founded in 1923. This horse show has a pretty remarkable history. Blowing Rock has been held on the same plot of land since 1925, and the event did not go on pause for the Great Depression or World War II. It is one of the longest continuously-run horse show in the United States.

August 29 – September 5, 2021
Founded in the early 1900s, the Hampton Classic was originally called, the “Southampton Horse Show” and remains one of the country’s most premier competitions, with a CSI4* division.

March 31 – April 4, 2021
The Pin Oak Charity Horse Show was founded in 1945 as means to fundraise for a pediatric hospital in Houston, TX. Today, Pin Oak supports the Texas Children’s Hospital and facets of the Ronald McDonald House in Texas. Pin Oak was the very horse show to be designated by a Heritage Competition by USEF.

October 14-23, 2021
The Pennsylvania National Horse Show, founded in 1946, boasts a tremendous history, having hosted some of the sport’s most legendary combinations. Frequently referred to simply as “Harrisburg,” the venue is home to the USEF Medal Final, formerly known as the AHSA Medal Final.

To view all of the USHJA’s educational videos, click here.

A Parent’s Guide for Having (and Modeling) Calm Confidence at the...