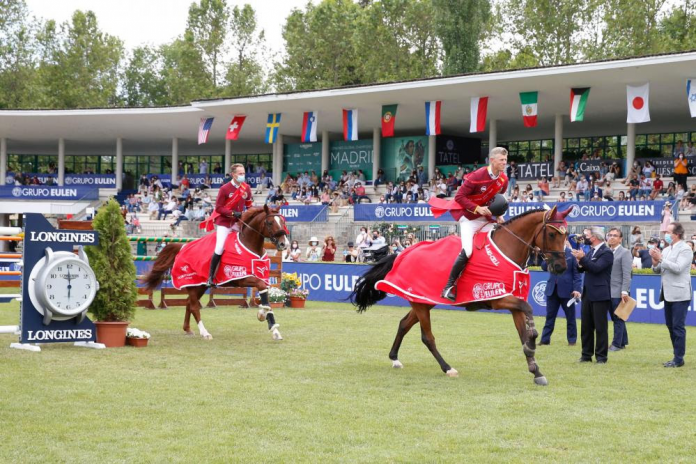 A sensational win by Shanghai Swans’ dynamic duo of Christian Ahlmann and Max Kühner in Madrid propelled the team into the GCL ranking lead after producing a full house of clear rounds in the first two stages of the championship. The Swans soared past Valkenswaard United who have dropped to second place as a ferocious battle develops at the top end of the grid.

Today, it was supersonic clear rounds from both Swans that secured first place in the large grass arena. In second place overnight the home team Madrid In Motion were the penultimate team to jump. Father and son duo Eric and Maikel van der Vleuten pleased the crowd to stay in 2nd on the podium today.

Jumping from 10th to 3rd place overnight the Paris Panthers’ pairing of Harrie Smolders and Darragh Kenny secured classy clear rounds and bumped themselves up the overall ranking as well.

Ahlmann said: “Dominator jumped amazing today and he helped me out a lot. The pressure was on today as the last to go but more than happy now. Our start this season couldn’t have been better but it is only a small step into the whole season so we need to stay concentrated in the next few legs.”

Last to go Max explained: “I trust my horse and know his quality, the pressure is because it is fun to fight for first place. It’s special to be back riding in front of some spectators. My horse was actually a bit spooky in the beginning at the spectators as he hasn’t been used to that the last few months but the spectators and the atmosphere give us wings.”

Spanish course designer Santiago Varela Ullastres presented a flowing 1.55m track over the undulating terrain. The 82 second time allowed caught out riders who added strides to the delicate fences and the Spanish flag triple combination took the most victims over the complex course.

How the action panned out:

Trailblazer Pieter Devos started steady and it wasn’t a clean sheet for the experienced mare Jade vd Bisschop today as they added 4 to the already large team total from yesterday. The flying Frenchman Olivier Robert had a much better day today jumping the all-important clear on the 12-year-old gelding Vivaldi des Meneaux. They set off at a faster pace and managed to keep the team on 24 faults but they finished 13th overall.

There was drama on course as Marc Houtzager lost a stirrup halfway round after two poles had already fallen down. It was remarkable how he kept his balance for the remaining jumps to stay on just the 8 faults with Sterrehof’s Dante N.O.P. The crowd cheered as the reins were handed over to put the spotlight on Sergio Alvarez Moya and Alamo. Adding to their already large score from yesterday Sergio’s 4 faults brought the Lions to a total of 30 faults and they finished bottom of the leaderboard.

With the team manager watching on from the kiss & cry Bart Bles managed to stay cool under pressure and produced the all-important clear with Kriskras DV showing his experience at this top level. It was an early 4 faults for Suus Kuyten as she opted to take 6 strides to the GC Prague Playoffs upright on Alfa Jordan. The gelding then lost a shoe in the penultimate line adding 8 faults to their team total. They crossed the line with 23 faults in total and took 11th place.

There was disappointment for the Cannes Stars who has two Irish bred horses on the same team. Their first rider Sameh El Dahan and WKD Aimez Moi dropped their shoulder over the last vertical of the triple combination, bumping the Cannes Stars score up to 8 faults. Cian O’Connor and Kilkenny also had trouble at the combination but this time it was the first vertical that fell. By adding a stride to the final combination he kept the team on 26 faults and in 15th overall.

Scott Brash brought one of his top horses Hello Mr President in to bat for the team. He paid the price of his forward approach as the liverpool was caught by the hind legs. Brash managed him expertly and they quickly found their stride again to come home on a fast four. U25 rider Spencer Smith then stepped in for the team riding Quibelle. They tackled the trickly triple with ease and soared around for a clear helping the team secure 6th place overall with 17 faults in 143.32s.

The first combination for the Berlin Eagles, Christian Kukuk and Checker, lowered an early rail but the rest stayed up so they posted four faults. Philipp Weishaupt was second out on the phenomenally consistent Coby. The horse produced the goods yet again and jumped his heart out for the team. The Eagles took a respectable 7th place with a team total of 17 faults.

Team stalwart Harrie Smolders and Bingo du Parc jumped into the triple combination on the angle, reducing the tempo and showing his brilliant horse management. It was an important clear for the Panthers as he handed over the baton to Irishman Darragh Kenny. Cruising VDL Cartello round the arena Kenny took it all in his stride and changed the game with the first double clear of the competition and allowing the Panthers to lead for a long time on 12 faults. Picking up the final spot on the podium as the team jumped 7 places overnight.

The Celtics fielded an unchanged team from yesterday. Adding lots of strides, Talaat took a steady approach and had a costly time fault after taking the long route in the roll back to the Caixa Bank fence. Ellen Whitaker then had an extremely unlucky fence down with Arena UK Winston but the team finished in a solid 8th place and picked up valuable championship points.

Scandinavian Vikings, one of the youngest teams in the field, kept the same riders as yesterday but both chose to swap horses. This tactic didn’t pay off for Teddy Vlock as he tried his hardest to stay blanched on Amsterdam but a hind leg fault on the Longines upright slid them down the order with a total of 5 faults. Evelina Tovek then took over the reins on Dalila de la Pomme and rode a foot perfect clear, proving just how valuable she is once again. The team finished in 9th overall.

Young talent Jodie Hall Mcateer lost momentum on Salt’n Peppa in the combination causing her to lose shape and knock it down.  A wide oxer a few fences later also caught her out adding eight to the team total. Eric Lamaze and Chacco Kid started quickly, opting for a line no one else took between one and two. They touched a rail mid-course but Eric rode determinedly, keeping a forward pace and putting the horse in just the right place to leap round with just 4 faults.

Both Falcons started off at a relaxed place but revved up as they went round. Leading the team in Yuri Mansur couldn’t do anything to stop two fences crashing down on Ibelle ASK and put teammate  Constant van Paesschen in the hot seat to ride a faultless round. Paired up with Isidoor van de Helle again today Constant suffered an awkward jump on course having a pole leaving the Falcons to finish on 21 faults and in 10th place.

Billy Twomey was first in for the Monaco aces on Lady Lou, a huge jumping mare with unbelievable scope.  A light touch at the liverpool cost them and it was then down to under-25 rider Jeanne Sadran on Vannan to try to keep the team scoresheet as low as possible. But luck wasn’t on their side today and poles fell around the course to pick up 16 faults pushing the team down the order to finish with 25 faults.

Winners of the 2018 & 2019 overall GCL championships, the London Knights fielded formidable horsepower in Madrid. Team owner Emily Moffitt was unlucky as the penultimate fence fell adding to a 4 faults earlier on in the course on Winning Good. Bringing out the big guns of Explosion W Ben Maher knew what he needed to do. It was a superb display of riding and judgement which handed them the fastest clear of the competition and proving the strategic value of the combination finishing 4th over all.

Marcus Ehning’s Stargold came out fresh and keen to jump. The German’s plan came tumbling down as he knocked the liverpool and the middle part of the triple combination leaving them on 12 faults. It was then down to Peder Fredricson and H&M Christian K to produce a fast clear to stay on the podium. He couldn’t quite match the pace of the Paris Panther and the team fell to 5th place with 12 faults in 149.13s.

It was a dream finish for the home team who fielded father and son duo Eric and Maikel van der Vleuten again. Eric set off at a solid pace and gave the long-framed Wunschkind a great ride through the triple but a pole fell later on piling pressure on his son’s shoulders. Riding the eye-catching Beauville Z, Maikel opted for a smoother pace and posted the first double clear of the weekend securing 2nd place on the podium in front of their delighted and dedicated supporters.

With a tactical switch to their top horses, Christian Ahlman and Max Kühner oozed with confidence as they rode into the beautiful grass arena. First to go Almann and Dominator 2000 Z made stunning shapes over the fences and picked up speed making it look easy to add another clear to their results. He handed over to Max Kühner and Elektric Blue P who has been on sensational form recently. He piloted the naturally fast gelding to another impressive clear helping the team to a richly deserved place at the top of the podium and into the leading in the GCL ranking.

The GCL now turns to Ramatuelle, Saint Tropez, for the third round of the Championship race.