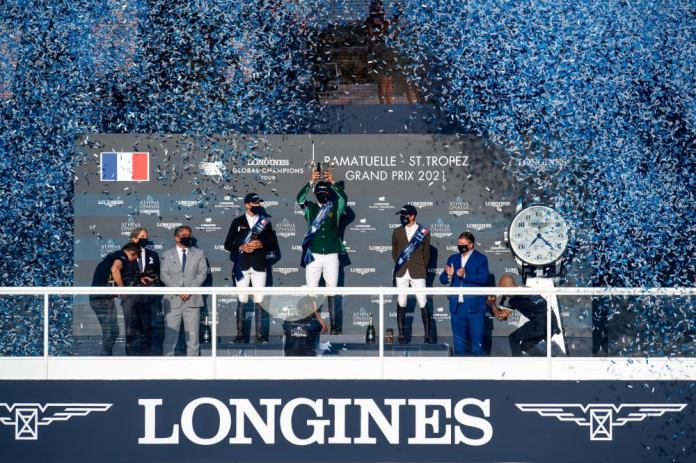 It was a spectacular Super Saturday for Peder Fredricson with a breathtaking win in the Longines Global Champions Tour of Ramatuelle/Saint-Tropez. The fight for the 2021 season title immediately intensified as the victory catapulted Peder into the Championship lead.

Fredricson took the coveted LGCT ranking leader’s armband as the Championship race looks to the next stage at Tops International Arena, Valkenswaard, where he sits on 96 points with an impressive lead. Bart Bles sits behind in second with 76 points while previous leader Scott Brash is now in third with 68 points overall.

A delighted Peder spoke after his win: “I wish everyday was like this! Lucky for me it was my day, I was nervous with all the riders still to come.”

It was a sumptuous day of top sport and a stunning destination as the LGCT of Ramatuelle / Saint Tropez delivered a dazzling Mediterranean experience for spectators and fans watching live the highest level of show jumping in another unique signature LGCT destination.

The LGCT Grand Prix of Ramatuelle / Saint-Tropez was brimming with top riders from start to finish delivering a supreme display to show jumping fans worldwide. The testing course built by Gregory Bodo demanded perfection and no room for error with a challenging Longines triple combination, plus a tricky tall Dolce & Gabbana upright that fell at the lightest of touches. Stars such as Christian Ahlmann and Ben Maher were both out of the jump-off to their immense disappointment.

First to light up the jump-off, Harrie Smolders and Monaco, were swift from the word go. But a hard knock at the Longines Athina Onassis Horse Show upright left the door open for the rest of the field to go clear and challenge the time of 35.83s.

Temperatures soared once more as Pieter Devos and Claire Z shifted up a gear with fantastic tight turns to make up time, but agonisingly the roll back to the GC fence was too tight knocking it down and finishing on 4 faults and slower than Smolders on  36.89s.

Peder Fredricson took centre stage with Catch Me Not S, taking on the challenge with ease. Fredricson hit the accelerator to the penultimate line, leaving spectators on the edge of their seats wondering whether they would clear it. The talented horse showed all his scope and skill as the pair rounded up to the final stretch, galloping clear in 34.98s to sheer delight from the crowd.

The LGCT Grand Prix win was down to the wire as the final horse and rider entered the arena. Simon Delestre and Hermes Ryan tried everything to claim the coveted ticket to the LGCT Super Grand Prix, the incredible climax to the LGCT season at the O2 Arena in Prague, but the final fence came crashing down and they settled for third place as the fastest on four faults.

Henrik von Eckermann put in a valiant attempt with the super speedy King Edward but they too could not beat Peder’s time and finished in second place – a Swedish one-two – on the podium in a time of 35.91s.

There was drama when Nicolas Delmotte on Urvoso du Roch had the same fence down as Harrie Smolders, then stopping the clock at the exact same time of 35.83s to take joint 4th place with the Dutchman.

So it would be a third LGCT Grand Prix win for Peder Fredricson who adds his name to the formidable line-up of riders competing at the GC Prague Playoffs for the Longines Global Champions Tour Super Grand Prix in November.

The Championship now looks to Valkenswaard from the 4 – 6 June where fierce Championship battle will continue in the stunning new grass arena at Tops International Arena.