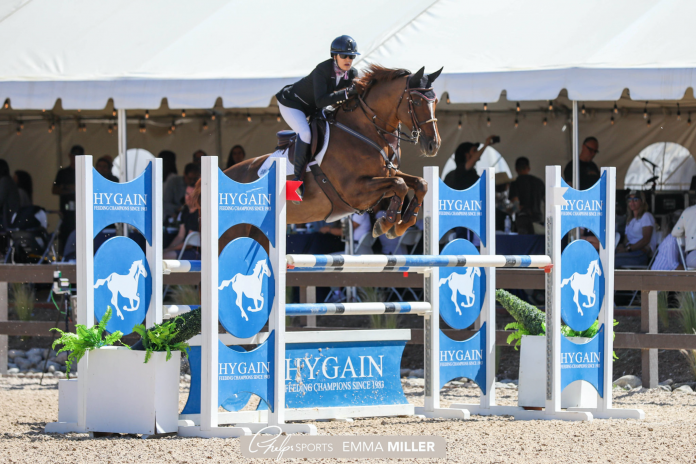 Temecula, Calif. – May 29, 2021 – Hungry horse-and-rider pairs brought their A game to Nilforushan Equisport Events’ Grand Prix Arena at Galway Downs for the highlight event of the week at the Temecula Valley National II, presented by Interactive Mortgage. After a week of prep, jumper competitors took the ring by force in Saturday’s $40,000 BioEqualizer National Grand Prix in hopes of claiming bragging rights and their share of the prize. Willing to fight it out to the very end, of the ten riders who faced off in the heart-pounding jump-off, it was ultimately Susan Artes and California Sunshine who edged out the competition taking home the blue ribbon.

33 pairs took to the ring over Esparza’s lengthy 15-effort 1.45m course which featured two triple combinations, several tricky verticals, and the Nilforushan Equisport Events’ wall. Fully anticipating that Esparza would not go easy on the pack, competitors pulled out all the stops in order to secure a chance to ride over the shortened track. First out of the gate, it was $5,000 Train with Shelby 1.35m Welcome Stake winner, Robert Blanchette who pioneered the track aboard RTS LLC’s 10-year-old Swedish Warmblood mare, Chardonnay. Riding the wave of momentum from earlier in the week, the Irish rider was also the first to claim his place in the jump-off aboard both of his mounts, Chardonnay and Coupis. Nine other horse and rider pairs advanced including Jamie Taylor and Chaman Semilly, Francie Nilforushan and My Love Carthago, Kaitlin Campbell on Dandy and Mascotte VD Withoeve, Katie Harris and  Macho-Blue PS, Judy Nielson and Costo Rico, Susan Artes and California Sunshine, and Matt Archer and Luigi VD Bisschop.

First to try their hand at the 8-obstacle jump-off was Blanchette and his fiery chestnut mare, Chardonnay. The duo did not disappoint, adding another clear round to their running tally and clocking in at 37.925 seconds, setting the pace for the rest of the pack. Eager to secure a podium position, Francie Nilforushan returned to the ring with Ali Nilforushan’s 10-year-old gelding, My Love Carthago. She and her trusty partner were tight and tidy on course, slicing the fences to shave off precious time. “Mylo” and Nilforushan galloped to the final oxer posting a time of 37.359 which would be good enough to take over the lead.

Blanchette, now knocked out of the first place podium, returned with vengeance, this time with his own experienced 14-year-old Oldenburg gelding, Coupis. Having the advantage of already riding the track once, Blanchette had a new game plan in mind. Coupis, who placed second behind fellow barn mate, Chardonnay, in the Welcome Stake earlier in the week, proved that he was as good as ever, besting the mare’s time clocking in at 37.57. The Irishman gave a spectacular effort over all 8 obstacles, but again could not top Nilforushan’s spectacular performance and settled into second place.

Eager to sweep the win away from Nilforushan, Susan Artes came to the ring ready to rock and roll with Alix Fargo’s 8-year-old Bavarian Sport Horse mare, California Sunshine. As the winners of the $10,000 1.40m Speed Classic held during Temecula Valley National Premier I, the duo had speed on their side heading into the jump-off. Artes and the fiery chestnut mare soared around course showcasing just how fast they could go. The pair charged the final oxer on course and stopped the timers at an incredibly fast time of 36.474.

Artes took over the first place podium and claimed the lion’s share of the prize while the previous leader, Nilforushan, settled for second place, bumping Blanchette and the faster of his two mounts, Coupis to third place. Also taking home a blue ribbon was 16-year-old, Elisa Broz who was concurrently competing in the U25 division aboard Cettello, the 14-year-old Holsteiner gelding owned by Constance Broz.

Week II of the Temecula Valley National series concludes on Sunday, May 30, with the High, Medium, and Low Junior, Amateur/Owner, Amateur Classics sponsored by Equ Lifestyle Boutique, Tack of the Town, and Voltaire as well as the $5,000 USHJA Rusty Brown Jewelry National Hunter Derby.

On California Sunshine:
“We have been together since she was 5-years-old and she is just now turning 8-years-old. I started her in the young horse classes and she actually won a 5 and a 6-year-old final so she has always been fast, but she has always been a little difficult in the mouth. So I am super excited and I have to give her all the credit in the jump-off because I rode like a blind person and I made a lot of mistakes, but she bailed me out. I knew she could so I just sat still and let her do her job.”

On the atmosphere:
“I think she likes it even more. I think she is only going to get better with a bigger crowd, and I think it is so nice to finally have a crowd.”

On her strategy for both tracks:
“For the first round I was really testing my bridle. I have a brand new bridle that Allen Clarke helped me with overnight. He cut and welded two bits together so I really had no idea what I was going to have in the ring. So my plan was to just try to be smooth and not override. I thought it was a relatively simple course, nothing too technical, but then sometimes it is easy to have jumps down. That was my plan in the first round and then in the jump-off, but I did not ride according to plan because I chipped to the first jump and still got eight strides from [fence] one to two, which a lot of people were riding nine [strides] there. But she is just such a naturally fast horse that I just trusted her scope and her step to be quick.”

On Nilforushan Equisport Events:
“I have been coming here since they started. It is such a fun horse show. Everything from one day to the next gets better and better. The only problem is that I gain weight because the food is so good here!”

Dr. Piper Klemm joins the Board of Directors of the Freedom...