Home Blogs Collegiate Corner Bees & Horses: A Year Like No Other 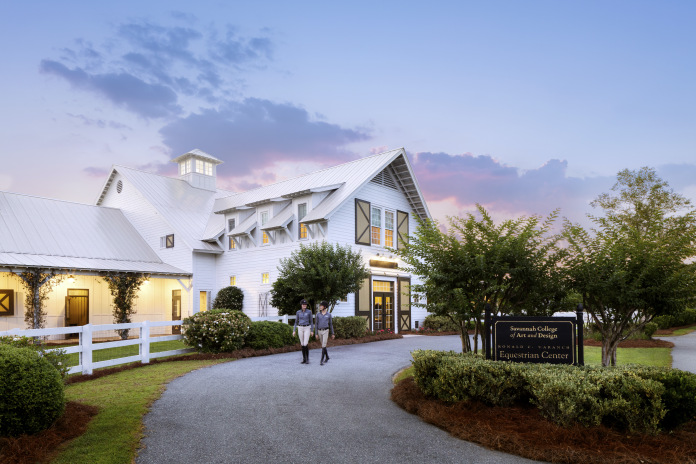 When the Savannah College of Art and Design (SCAD) hosted the Tournament of Champions in May, it was the first in-person competition that the SCAD Bees had participated in nearly 15 months. For SCAD Equestrian Coach Ashley Henry, the team’s performance at the Ronald C. Waranch Equestrian Center in Hardeeville, South Carolina was the summit of a uniquely challenging year—one that went from sitting on the sidelines, to competing virtually, to re-entering their home ring—all with SCAD’s unparalleled reputation at stake. Here, Coach Henry recounts a season where the only constant was a commitment to excellence.

The collegiate equestrian community is close-knit. We all support each other and build off each other. During the pandemic, competitions kept going on. People said: Where’s SCAD?

In a normal year, we have three main associations that we compete in: the ANRC [American National Riding Commission], the IHSA [Intercollegiate Horse Shows Association], and the Tournament of Champions Series. This past year, IHSA said they would not have in-person competitions, but they were going to offer a series of virtual competitions. Their inaugural online horse show was November 2020, and SCAD athletics teams were, at that time, not competing. SCAD had made that decision for the health and well-being of our students. For SCAD equestrian, watching other colleges competing in IHSA only fueled our fire. I was scouting, strategizing, and planning. We were waiting for the green light.

In the meantime, the ANRC had also held a virtual Fall collegiate tournament. As a board member for ANRC, we had calls where we discussed the reality of canceling the National Equitation Championship in early April as travel restrictions and safety were still a big risk. As a board, we decided to hold another series of virtual collegiate tournaments, in late March and mid. April, which at the time for SCAD athletics hoped to be back in action.

Meanwhile, the Tournament of Champions was on the backburner. The organizer said, “We want to try to do a spring tournament. We’re just not sure where or when or how.”

While waiting for IHSA and ANRC to announce when entries would open with their requirements for the videos we had to submit to judges for the virtual competitions, I reached out to the SCAD film department and borrowed a camera and a tripod, and they said, Have at it!

The ANRC March tournament was our first competition in a year. We entered four teams, and each of the four teams had five riders compete. We put together 20 videos. I knew we needed to present our best. There was a lot of planning. A schedule for a rider might be: At 8:00 a.m. start braiding, 11 a.m. tack up, at 11:30 you’re on, warming up, at 11:45 we’re filming; then we’re done, and it’s the next rider’s turn.

As far as the format, there was a flat test called a “program ride” performed in a court with letters just like at the national competition, and one over-fences course. You’re given the course and the program ride, and you set it up in your home arena and film it. We weren’t allowed to go back and edit anything, so we really focused on getting it done right.

In that ANRC March tournament, SCAD teams were second, third, fourth, and fifth overall. I had one rider in each of those teams either win their phase or be second. It was really nice for those riders to show their abilities, and to do so with our own horses really eased the process.

Spring quarter kicked off at SCAD on March 22, 2021. The IHSA virtual tournament started the same day! We dusted off our boots and got started. I entered 48 videos into that IHSA open-entry national horse show. Any team could enter as many riders as they wanted. It was the largest ever, 262 entries. And we were champions: SCAD was the high point team. Adam Edgar, a graduating senior, was the individual high score rider of the entire competition; Lindsey Hurley, a freshman, was the reserve high score rider. We had several individual riders win their classes: Ian Arnoldy won his class. Sallie Sledd won her class, and Francesca Nervick won her class. We also had several riders who were second, third, and fourth in their classes; everyone had great rides. We were just getting warmed up, and knowing that it was being aired online for the entire world to see meant a lot.

For the ANRC April tournament, I entered four teams of five riders each. We were first, second, third, and sixth in that competition. All the while, our health policies were strict. we had daily health-checks and wore face masks.

Then the pandemic starting lifting, to the degree that it was a real possibility that we could end the season with an in-person tournament. I turned to Eddie Federwisch, director of our SCAD equestrian program, and said, “Can we host the Tournament of Champions?” We agreed: Let’s make this happen in person.

The director of the Tournament of Champions, Jim Arrigon, said he could get at least 10 colleges to compete. In total, there wound up being 12, and some of them, including SCAD, had two teams competing. In a year and a half, it was our first in-person competition. Our last time at the Tournament of Champions, in 2019 at Penn State, SCAD was the highest scoring team in tournament history, earning 54 out of a possible 56 points. This year we repeated that total. To be able to be there on May 1—and to cheer, out loud, in person, was fantastic.

At our end-of-the-year team award ceremony, I told the team that we had a year-and-a-half of emotions packed into 10 weeks. No matter the format, virtual or in-person, we stayed strong. We had a significant number of students who were recognized as IHSA All-Academic First Team and All-Academic Second Team. And we had fun: Right before finals, we had a field day, with a costume contest where the riders had to dress themselves and their horse, and an egg and spoon race on horseback, just to let loose. That’s the SCAD equestrian family.

With Fall 2021 coming around, we have a huge number of students ready to try out in person. As an institution, SCAD has supported the SCAD equestrian program and provided us with the resources to build our national championship winning program. We’re thinking ahead. We can, we did, and we will.

IEA Awards Over 100,000 in Cash and Collegiate Partner Scholarships During 20th Anniversary Season