Home Blogs Bay Broadcast “Are You With Us?” Important Discussions at the USEF Mid-Year Board Meeting 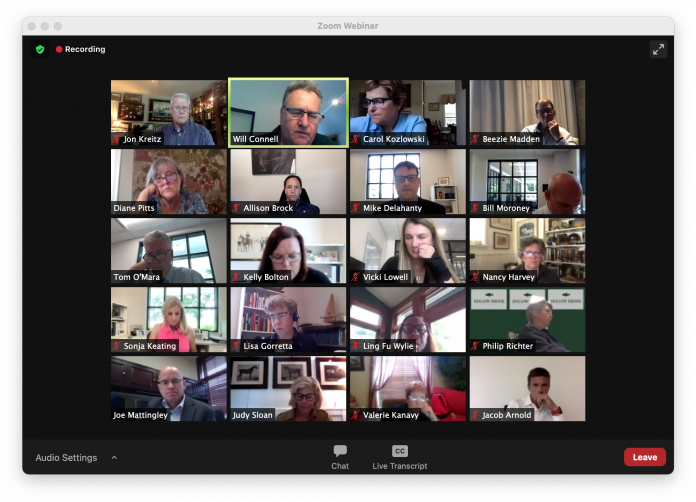 The United States Equestrian Federation (USEF) held its Mid-Year Board Meeting Monday and welcomed the membership to tune in to discussions via Zoom. Those watching found a large group of recognizable industry stakeholders discussing impactful issues in equestrian sport, across all of the disciplines overseen by the National Federation.

USEF President Tom O’Mara led the meeting—and did so with grace. O’Mara eloquently spewed attentive details on every topic, while being receptive to the questions presented to him by board members.

And the topics weren’t light, by any means. We’ve collected some highlights from the meeting:

The meeting started with the nitty gritty: The treasury report detailed the year-to-date financial gains and losses for the Federation. A round of applause was had when O’Mara shared that the Federation’s PPP loan had been forgiven. The Paycheck Protection Program was established during the global pandemic to help businesses keep their workforce employed during such a time of financial loss.

The most telling part of this discussion? A statement: “The sport is back.” USEF revenue is at 80 percent of pre-pandemic numbers, with horse shows flourishing.

It was noted in the conversation that the Federation is cash-heavy at the moment. This, according to the Board, is due to front-loaded funds from annual registrations, membership dues, and accounting for a possible debt in case the PPP loan was not forgiven. This cash flow is expected to decline through the second half of the year.

Board members were asked to sign off on exploring a Coach Development Program. This program would not focus so much on the “technical” aspects of sport but rather on helping coaches/trainers gain new skill sets involving best business practices, communication skills, and more. A Coaching Conference would also be established through this program. It’s important to note that Board members were not signing off on the program itself—just exploring the idea of one.

“We provide a steward in the schooling area to make sure coaches are following the rules, but we don’t do anything to help the coaches, the people standing in the ring,” said Will Connell, USEF Director of Sport Programs. Connell explained how other mainstream sports already have such programs in place.

The question was asked, “Are you with us?”

This exploration was approved. We should learn more about what such a program would look like in the next three to four months.

The mileage rule has long been a hot-button issue within the Federation, particularly with hunter-jumper sport.

The formation of a Competition Task Force was announced in January, and the group has so far led to the passage of eight USEF rule changes. The task force recently held a group in-person retreat, which was described as immensely productive.

The hunter-jumper members of this task force are learning from other disciplines. Eventing has an informative heat map that shows how the environment changes with a competition radius during different parts of the year.

The Board revealed that there may be a future condensing of horse shows at the highest level of the sport as OCs adjust to new standards and requirements. This may open opportunities for new shows at different levels.

An Amateur Task Force was established in February in response to a controversial potential adjustment to the existing rule that was ultimately tabled.

This task force has made it clear that they will be addressing the Amateur Rule and the definition of an “amateur” rider in parts. Instead of defining what an amateur rider can’t do, they will be focusing on what amateur riders can do. Performing duties at an introductory level, the potential establishment of amateur age groups, and social influencers are among the topics being explored.

Currently this task force is meeting every other week, and they have held beneficial focus groups with both professionals and amateur figures in the industry. The task force plans to socialize any recommendations they make to the board so that the membership has the opportunity to provide feedback before any proposed changes come up for a vote.

What is this task force learning? “One shoe doesn’t fit everyone, and people are passionate about what works and what doesn’t work in each breed or discipline.”

Within the Arabian Horse Association, there are “levels” to amateurism, which might be explored further in hunter-jumper sport. The board agreed that the complexity of this issue has often resulted in delaying any potential changes to existing amateur rules, but this task force is hard at work to make productive—and sensitive—change. Stay tuned.

Suggestions or comments on the USEF Mid-Year Board Meeting can be sent to webinar@usef.org.