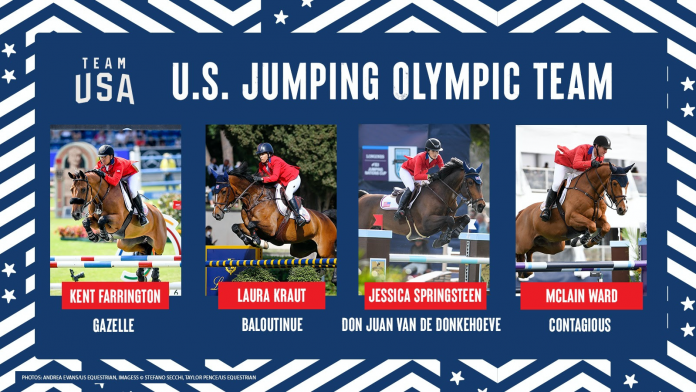 Lexington, Ky. – US Equestrian is pleased to announce the combinations selected to represent the U.S. Jumping Team at the Olympic Games Tokyo 2020 as part of Team USA in Tokyo, Japan. The team will be led by Chef d’Equipe Robert Ridland and Team Leader Lizzy Chesson. Competition will begin on August 3 and continue through August 7 at the Equestrian Park venue.

“This weekend’s two simultaneous CSI5* grand prix events in Rotterdam and Windsor completed a long and productive selection process for the Tokyo Olympic Games. Following a very competitive winter circuit in Florida, American riders competed successfully against the world’s best in five major CSI5* events in Europe over the past couple months. I feel very confident that the seasoned group of riders that we will be sending to Tokyo is in top current form and peaking at just the right time. Backing them up as reserves will be Brian Moggre and Lucy Deslauriers, two of the young stars on the international circuit who made a mark for themselves with their one-two finish in the CSI5* Grand Prix of Sopot. We’re looking forward to the next few weeks ahead and are aiming to deliver a strong performance for Team USA in Tokyo.”

The following athlete-and-horse combinations will represent the United States at the Olympic Games Tokyo 2020 and are listed in alphabetical order: