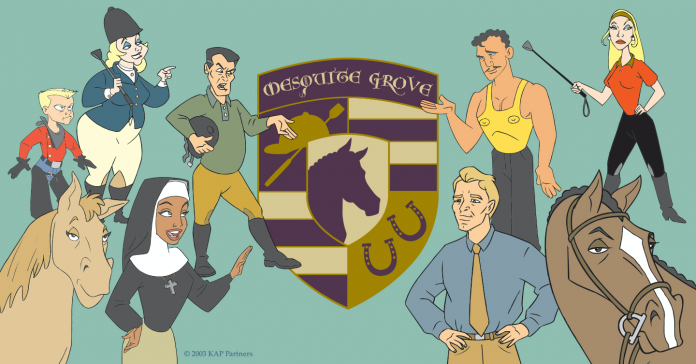 Kent approaches the group, all clad in tan riding pants, tall black boots and white, high-collared long-sleeve shirts and asks if they know where Earl Norris and the Mesquite Grove contingent might be. Tinka Varyeur, a beautiful woman with honey-blonde hair, reminiscent of Faith Hill, responds in the voice of a chain-smoking truck stop waitress with an odd German accent, “You mean The Earl, don’t you?”

“A reluctantly aging former Olympian maneuvers to maintain control of his tiny equestrian fiefdom of moneyed misfits in small-town Texas.” That’s the storyline Patti Brown Standen concocted with colleagues Kirk Berlin and Allen Griffith to create Mesquite Grove, a satirical animation that examines the dysfunctional relationships equestrians form at the barn in a most unique—and humorous—way.

Brown Standen, an avid multidisciplinary amateur rider, began putting pen to paper more than two decades ago when she would observe the antics that occurred at the Texas boarding barn where she rode. As the collection of stories grew, so too did her creativity, as she began to view the equestrian lifestyle from an outsider’s perspective. She realized, the barn was a “unique setting” that was worth sharing.

“[Even if you’re not an equestrian], you can recognize all the characters [at a barn],” Brown Standen said. “There are humorous stereotypes and dysfunctional relationships, just like [in the TV programs] Parks and Recreation and The Office.”

So, with Berlin and Griffith, she formulated the concept of an animated series, full of eclectic characters created through an exaggerated conglomeration of personalities observed at the barn and the horse show. The main character is Earl Norris, a “former U.S. Olympic Equestrian Team member” who follows his wife to Texas and builds a new business at a place called Mesquite Grove. Brown Standen describes the show as a fusion of Best in Show and Blazing Saddles, as the “nouveau riche culture of the English riders interfaces roughly with that of the local cowboys.”

The brains behind the Mesquite Grove series have created a website—MesquiteGrove.com—that contains a one-page pilot treatment, along with detailed character breakdowns for 29 figures. The group hopes their work will spark the interest of a well-connected producer or mentor that can help them take their idea from concept to full-fledged animation.

“[Mesquite Grove] is a distillate of different backgrounds, all coexisting,” Brown Standen said. “I mostly want people to have fun with it. I think it can be funny and enjoyable.”

While the collaborators initially tried to get their idea off the ground in the early 2000s, the recent rise of social media inspired her to restart the project.

“Social media—we didn’t have that opportunity before,” Brown Standen said. “Our website is a marketing piece. If we can get it in front of a producer or decision maker, it is our pitch. We need someone to do the animation and put the show together.

A quick read of any of Mesquite Grove’s character descriptions elicits some chuckles. Even the animals have personalities and are able to talk, from Dalai the retired show pony and Miko “the outrageously expensive warmblood horse” to Helmuth the snake. What Brown Standen enjoys about the episodes most is that while there is exaggeration in the show, a lot of the storylines are based on real-life events—including an incident where a character, attempting to give kisses to her horse, is suddenly grabbed by the horse—at her orthodontia.

“It’s funny how many of the episodes or things we have people saying did actually happen,” she said. “I think that I like holding up a mirror. Whether or not we can see ourselves in some of those characters, we can certainly see other people in these characters! Also, the animals—equestrians are very tuned into our animals. A lot of us often say what we think an animal might be thinking or saying. I love giving a voice to the animals.”

Brown Standen is all in on this project, even taking Robert McKee’s famed “Story” course in Las Vegas.

“One thing that I learned, is that if you asked me before Mesquite Grove if I was a creative person, I would have laughed and said, ‘No.’ I realized, maybe I do have some creativity,” Brown Standen said. “[McKee] gave me a way to look at life from a different perspective—not just with screenplays. I felt like that course was one of the more worthwhile things I’ve done.”

It also reaffirmed her belief in the team’s idea, and she hopes to watch her characters come to life in the not-too-distant future. She has one ask for anyone that enjoys reading the exploits of her Mesquite Grove characters online.

The Locations and Horses That Make It The Silver Screen