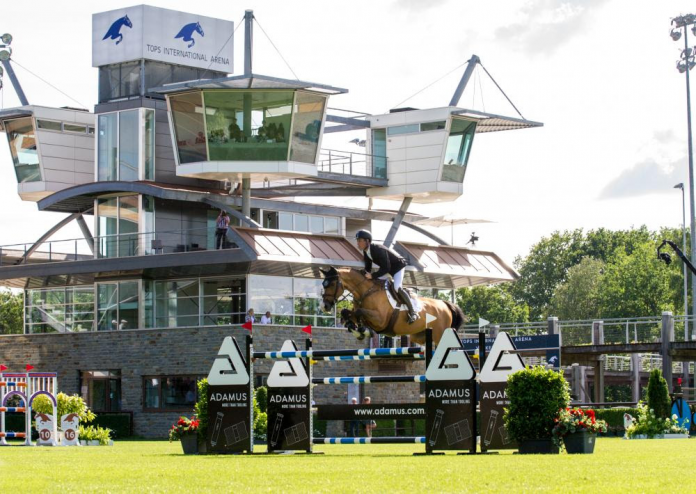 Scott Brash and the powerful bay gelding Hello Jefferson made it the perfect setup for the Olympics winning the €300,000 Tops International Arena Grand Prix in blistering style. Pieter Devos took second place on his super consistent mare Claire Z and the third spot on the podium was clinched by Luiz Francisco de Azevedo and My Way.

It was an afternoon of world-class performances and the equine firepower on display was breathtaking with familiar star horses and future champions lighting up Tops International Arena and giving fans around the world watching GCTV an incredible treat.

After his win, Scott Brash said: “I am delighted with the way Jefferson is jumping, he feels in great form and you couldn’t have a better preparation for the Olympics.”

Speaking about the new grass arena, Brash explained: “The grass arena is fantastic, there was a little bit of rain last night and I think it made it even better today, the ground is absolutely super and has great spring off it, just brilliant!”

The build-up to the jump-off was a fascinating look at the form of both top riders and horses and the immaculate grass arena was the perfect stage for the world-class CSI5* Grand Prix with the 1.60m course proving a robust test of the best.

First to go in the Grand Prix was local Dutchman Kevin Jochems with Turbo Z. The pair set out around Uliano Vezzani’s testing track with pace but an early fault at the Adamus oxer followed shortly by two more poles to come home on 12 faults. The next two riders Alexandra Thornton and Julien Epaillard also both knocked the Adamus oxer in front of the Spider and put them straight out of contention.

There was heartache for Jos Verlooy who looked on track for the first clear of the day on Luciano van het Geinsteinde until the final fence came crashing down along with their chances of a place in the jump-off. The first clear came after nine rider from Luciana Diniz and Conchento PS. The clear rounds then started coming thick and fast as 12 combinations out of the 36 starters made it through to the jump-off.

Luciana Diniz came cantering back into the huge grass arena for the jump-off and showed her big bay the final fence. The pair set out around the course with determination but it was a surprise run out at the second fence that cost them the win straight away and they had to settle for 7 faults.

All eyes were on Christian Ahlmann and the stunning grey stallion Clintrexo Z as they set off at a blisteringly fast pace and took all the strides out where possible. Flying into the double across the middle of the arena, Clintrexo’s hind legs swung to the left, taking out the whole wing and unseating Ahlmann mid-way through the double. He stayed in the saddle and regathered before the final few fences but it was 4 faults on the scoreboard.

Opening up Berlux Z’s stride, Simone Delestre put the pedal to the metal and sailed over the final fence for an exceptional clear round in 51.18 seconds and put the pressure on the rest of the field.

Edwina Tops-Alexander looked to be heading to the top of the leaderboard with an incredibly fast round on home turf at Tops International Arena. She galloped to the last on Fellow Castlefield but a cry from the crowd confirmed the final fence had fallen and they finished with 4 faults in 45 seconds exactly.

Still riding with a broken rib home hero Harrie Smolders finished up the top 10 on Bingo du Parc after an early fault when the Roelofsen upright fell down.

Pieter Devos took all the risks and was at a flat out gallop to the last on the huge striding mare Claire Z, making all the smart moves on the inside turns and taking strides out he catapulted himself to the top of the scoreboard to go clear and stop the clock in 47.71 seconds.

Fresh from her win yesterday the young talent of Kim Emmen and Jack van het Dennehof had to settle for 8 faults in the jump off while it also wasn’t meant to be for last week’s Longines Global Champions Tour Grand Prix of Monaco winner Darragh Kenny and VDL Cartello.

Marcus Ehning had his foot to the floor in characteristically fast style taking a risk the tall 1.60m upright at the far end of the arena which came tumbling down and he finished the fastest on four faults in 43.59s.

Even after a sticky rollback to the Roelofsen upright Scott Brash still managed to shave seconds off the time to beat with Hello Jefferson proving once again why they are the ones to watch. They crossed through the finish line in 45.71 seconds and flew into the lead.

Tactics came into play when Malin Baryard-Johnsson opted for a smooth and steady round on H&M Indiana to pick up 5th place knowing there were not many clear rounds. Last to go Luiz Francisco de Azevedo gave it everything with the talented grey My Way but couldn’t quite match the pace to slot into third in a time of 47.86 seconds.

The last day of the summer show at Valkenswaard featured great sport and entertainment. In the Young Horse final course builder, Uliano Vezzani presented a challenging, selective but fair course. Of the 26 combinations, seven managed to get through to the jump-off and it was a win for German Tobias Meyer and Celebrity H. Speaking after their win he said: “It’s my first time I’m riding here. I’ve never seen such a beautiful grass arena. But also all the other arenas, the stables and the whole management are great. I feel great, the victory, to be here, it’s a great event and my horse jumped well all days.”

Charles Berthol won the CSI1* Grand Prix with Lordabel Z, he explained: “It is always nice to win, but to win the Grand Prix here, for the first time on the grass in Valkenswaard, is great. There was a challenge everywhere and the time for the jump-off was sharp.” And what a thrill and battle in the beautiful and exciting jump-off of the CSI2* Grand Prix on Sunday afternoon. Of the 54 combinations in the first round, 14 came back in the jump-off but it was the Flying Frenchman Julien Epaillard who took top honours on Calgary Tame.