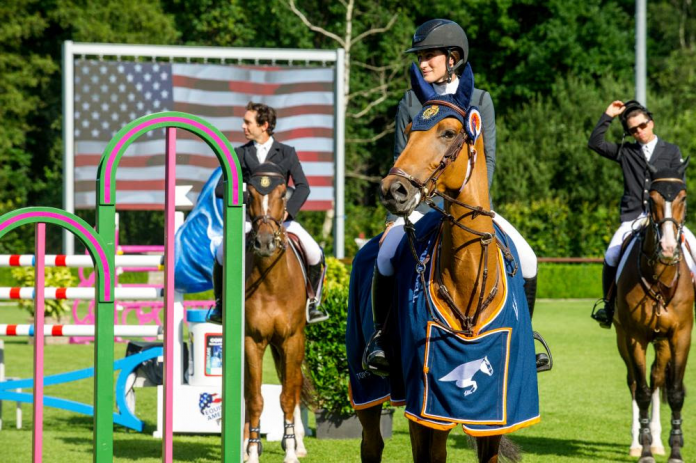 As the sun shone over the expensive grass arena at Tops International Arena it was Jessica Springsteen and Hungry Heart who took everyone’s breath away with a sensational round to claim top spot on the podium. Beneath bright blue skies, it was the perfect prelude to the final day of the Summer Event set to be full of exciting Grand Prix classes for all the family to enjoy.

A beaming Jessica said: “This is my first weekend jumping back with the grass arena here and the footing is unbelievable. It is such a great facility for the horses and I am so happy to be back. I am always so excited to come here.”

“I have a super-fast horse and he is really competitive. He jumped the whole course really well so I am super proud of him. With him, I add strides but I knew I did some neat turns so I thought I would be pretty quick.”

Young Irishman Micheal Pender continued his phenomenal form after a win in the first CSI4* class of the day he picked up second in today’s speed class with HHS Fast Forward a second behind Springsteen while Marlon Módolo Zanotelli took third place on Like A Diamond van het Schaeck.

Uliano Vezzani set a fast and furious 1.50m speed class and gave the riders lots of options to take strides out but all the options meant only ten combinations finished with a clear. The Tulip triple combination down the long side of the stunning grass arena fell the most while the trick Swedish oxer by the grandstand proved to jump well.

The clear rounds came thick and fast at the start. First to go was the fairly new combination of Nayel Nassar and Coronado who set out on a mission. They produced the goods and stopped the clock in 67.27s to put pressure on the rest of the field.

Known for their speed the combination of Kent Farrington and Orafina put the pedal to the metal and cruised over the fences with ease. The pair knocked Nassar off the top spot but their lead didn’t last for long as Eduardo Alvarez Aznar and Seringat stormed to the top of the leaderboard after a rapid clear round in 66 seconds exactly.

There was drama when Micheal Greve managed to save himself from a wiggle in the middle of the combination to recover and jump the clear but in a slow time of 71.06 finishing off the top 10 with Fernando. The striking black stallion of Gilles Thomas looked on track for a top five placing until they got too excited into the Tulip triple and kicked out, knocking the first part down and having to settle for four faults.

Yesterday’s winner of the big CSI4* class Marlon Módolo Zanotelli has been in sensational form all weekend. Opting to ride Like A Diamond van het Schaeck their consistent streak continued as they powered into the lead with what seemed an unbeatable time of 65.75 seconds.

Heads then turned to one of the fastest combinations in France Julien Epaillard and Calgary Tame. The flying Frenchman was revving the engine even before the start, however, luck wasn’t on their side today and the Swedish oxer fell before it all fell apart and they came home on 14 faults.

It was a display of world-class sport and talent from Jessica Springsteen and Hungry Heart who took a foot-perfect rollback mid-course before galloping to the final fence and coming home in 62.52 seconds. They cut a breathtaking three seconds off the time to beat to claim the title and fill herself with confidence ahead of the Tokyo Olympics.

Continuing his super form young gun Micheal Pender brought out his winning horse from the first CSI4* class of the day  HHS Fast Forward. Once again the pair rocketed around the arena taking it all in their stride and wasting no time in the air. They couldn’t quite match the pace and were a fraction slower than Springsteen to stop the clock in 63.59 seconds and take a second this time.

The CSI2* Big Tour was won brilliantly by Brazilian top rider Marlon Modolo Zanotelli with the 14-year-old mare Catalina. An enthusiastic Zanotelli said afterwards: “I am very happy, also to be here again. It is a fantastic event and I want to thank the organisation for making this possible.I was the first to go because my horse Catalina, owned and ridden by Cindy van de Straten, is a bit scared of other horses. I walked the course together with Cindy’s trainer, who helps me a lot. He knows the horse very well, which is a big advantage. He told me exactly what to do with the lines and we made a plan and that worked well.”

In the CSI1* 1.35m class against the clock, the victory went just like yesterday to the Brazilian Leandro José Abrahao with the 10-year-old mare Bella des Causses. While Dutchman Piet Raijmakers Jr also repeated his victory of yesterday in the CSI1* 1.25m class with jump-off. Along with Belgian Anouch Danneels and her nine-year-old mare Oakingham Francessca who confirmed their good form by winning the CSI1* 1.15m today as well.

German rider Tobias Meyer clearly had a mission and brought it to a successful conclusion in the Young Horse class. Meyer and the six-year-old mare Celebrity-H (Comme Il Faut 5 x No Limit) were the first to start in the 1.30/1.35m against the clock competition and stopped the clock at 66.26. None of the combinations after that managed to match this time. This duo were also unbeatable last weekend during the first summer event at Tops International Arena.