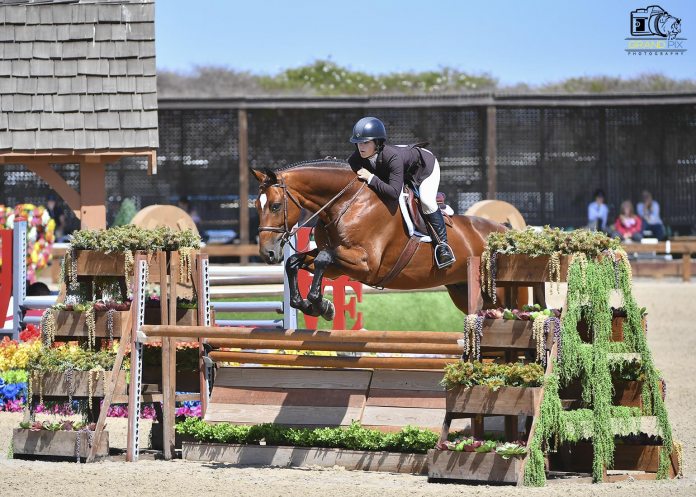 Sonoma, Calif. – The 2021 edition of the Adequan®/USEF Junior Hunter National Championships – West closed out Wednesday at the Sonoma Horse Park with two new Grand Champions crowned along with seven section champions across the 3’6” and 3’3” fence heights.

In the 3’6” section, Stella Wasserman (Beverly Hills, Calif.) and Princeton claimed the Overall Grand Champion tricolor and The Monarch International Perpetual Trophy thanks to two spectacular over fences rounds—the pair won both the Classic and Handy rounds for the Large Junior Hunter 15 & Under section. Wasserman, who trains with Jamie Sailor at Meadow Grove Farm, is a veteran of past Junior Hunter National Championships, and she guided the Selle Français gelding through his first-ever trip to the finals.

“He’s super sweet in the barn. He’s lovely,” said Wasserman. “He’s actually only been doing the hunters for a couple of months now, but I think he’s found his calling! After the classic round yesterday, I was feeling good…Coming into today I just wanted to go out there and have fun and do what I came here to do.”

In the 3’3” section, it was Elle Moreno (Dallas, Texas) riding Elvenstar Farm’s Cascavel to the Overall Grand Champion title and winning the Montserrat Perpetual Trophy after their win in the Large Junior Hunter 16-17 section. Moreno trains with David and Stacy Sanderson at Hunter Lane in Texas and was also coached by Elvenstar Farm at the finals.

The Small Collection Perpetual Trophy is awarded annually to the top placing mare across all sections at Junior Hunter Finals West. This year, it was Fleur de Lis ridden by Avery Glynn from the 3’6” Large Junior Hunter 15 & Under who won the title.