Home Blogs Could Yibir Be Godolphin’s Next Globetrotting Star After Bahrain Trophy Triumph? 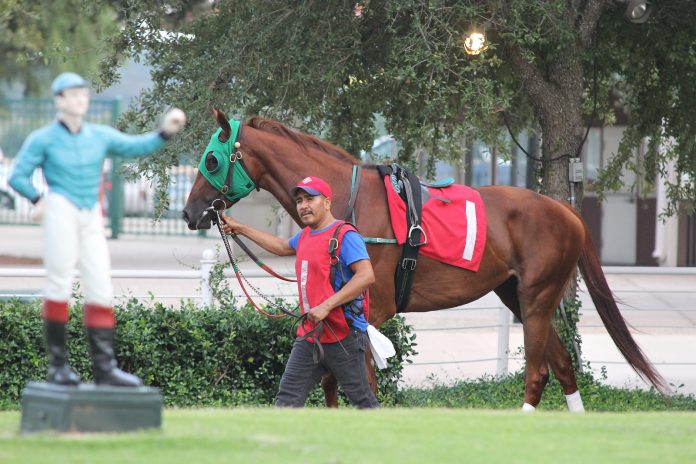 As a retained trainer to powerful global owners Godolphin, Newmarket handler Charlie Appleby has had and continues to have some very special horses. For evidence of that, look no further than the fact that his stable sent out the winners of both the Epsom Derby and its Irish equivalent in Adayar and Hurricane Lane this year.

Yibir is a gelding, so isn’t eligible to run in the final Classic of the British Flat season, the St Leger at Doncaster, and can’t further the pursuit of thoroughbred excellence. However, a breakthrough win for the son of Dubawi in the Group 3 Bahrain Trophy over a mile and five furlongs on the opening day of the July Festival has opened new horizons for yet another promising Appleby three-year-old.

Victory in a prestigious conditions contest at Newbury on his final start as a juvenile set Yibir up as a horse to follow. The second, Megallan, went on fill the same spot in the Group 2 Dante Stakes at York behind Hurricane Lane, Godolphin’s aforementioned Irish Derby hero.In a tight finish to the Sandown Classic Trial on his return to action, only subsequent Royal Ascot winner Alenquer and the 2021 Epsom Derby hero Adayar finished ahead of Yibir. Although a beaten favourite on his next two starts at Listed level around Chester and Goodwood, he simply wasn’t getting the test of stamina needed.

On the dam side of his pedigree, Yibir is out of Monsun mare Rumh who won two-mile handicaps. That makes him a full sister to dual Group 1 winning middle-distance filly Wild Illusion. Such regal breeding should give Yibir a touch of class, and he proved it with that major success at Newmarket.

Appleby enjoyed his first win in the Bahrain Trophy, but thoughts turn to what next for his improving gelding. Yibir may go for the Gordon Stakes and, if so looks sure to be among Glorious Goodwood day 3 betting tips provided by experts who know all the form.

That race over a mile-and-a-half helped launched the career of Godolphin’s global star Cross Counter back in the summer of 2018. Appleby has two wins in the Gordon Stakes in the last eight years with Cap O’Rushes also carrying his employers’ famous all-blue silks to victory in 2013.

The classy Yibir relishes the step-up in trip to land the £150,000 Bahrain Trophy for Charlie Appleby, @the_doyler and @godolphin @NewmarketRace pic.twitter.com/yuEJXCw0Yz

The only downside to Yibir going for that race at Goodwood is dropping back in trip and he’ll carry a penalty for his previous Group 3 win. Defying that doesn’t look beyond him, however, based on the way that those in-behind finished strung out.

A tilt at the Group 2 Great Voltigeur at York on the opening day of the Ebor Festival in August is also another option, if Appleby wishes to give Yibir more of a rest between assignments. Cross Counter took that in before heading overseas for his ground-breaking raid on the Melbourne Cup. He also won the 2019 Dubai Gold Cup in Meydan where Godolphin supremo Sheikh Mohammed put up the prize money.

Appleby was keen to stress that Yibir would need to learn to travel better before launching another ambitious raid Down Under, but these international assignments are a huge part of what the wider operation is about. It could be well worth following whatever future plans they make for him.