Home Blogs Bay Broadcast Walk the Course for the Individual Jumping Qualifier at the Tokyo Olympic... 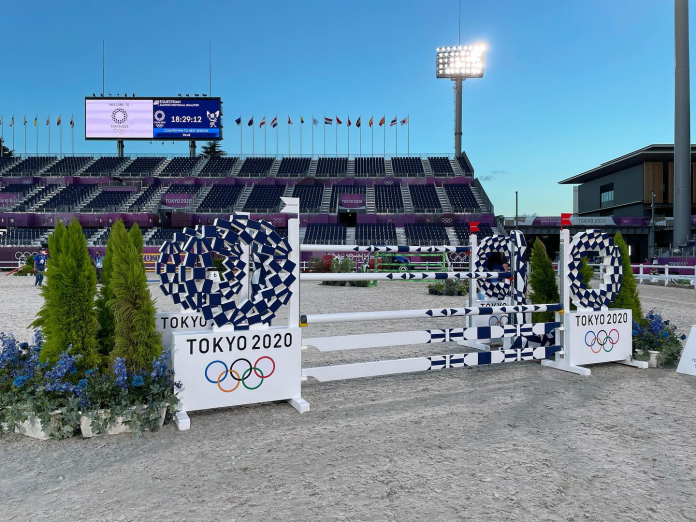 At long last, show jumping competition at the Tokyo Olympic Games got underway at the Baji Koen Equestrian Park Tuesday evening in Japan.

Spain’s Santiago Varela is designing the courses this week, and USA Jumping shared a look at the visually stimulating fences that were presented to the 73 combinations in the sport’s opening competition, the individual qualifier.

The first fence was welcoming. Before riders could look ahead, they took a quick look back (in time) at this oxer, a reminder of the 2016 Rio Olympic Games in Brazil.

At Fence 2, riders met with the Tokyo skyline at this careful 1.60m vertical.

The final element of a grueling triple combination

This triple bar was particularly tall, in addition to its width. Typically, the triple bar is jumped well, as it is set in a way that supports the natural arc of a horse’s jump. Its challenge typically lies in what comes before and after it, as this jump really opens up a horse.

This koi fish fence appropriately had a water tray, strategically placed behind the fence and not directly under it.

This fence, resembling bamboo, was topped with a tiny, careful plank. Note the yellow jump cups, the most shallow available.

The dreaded open water: This element will appear in two more courses, the individual final and the team final.

Pick your poison at Fence 10. There was a lot happening here! The singular jump filler is abnormal, even before you work in the fact that the horses could see straight through it. A realistic-looking sumo wrestler met combinations at the right standard, while the lightly colored poles blended in with the backdrop. This careful vertical was set at 1.65m.

This beautifully hand-painted wing-less wall was set at 1.65m.

Jumping competition continues Wednesday at 7pm JST / 6am EDT with the individual final. Unfortunately, we won’t see Team USA in this individual event, as none of their riders qualified Tuesday (The highest score to advance was 2 time faults). Team USA will return to the arena for team qualifying on Friday, Aug. 6.

5 Tips When Using Waivers in Your Horse Program