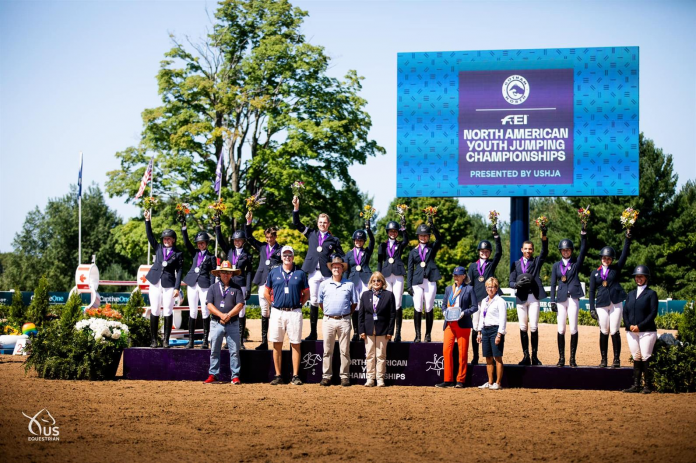 Gotham North FEI North American Youth Jumping Championships, presented by USHJA, saw its third day of competition in Traverse City, Michigan Friday, August 13. Junior and Young Rider athletes took to their second day of team competition as they battled it out for their shot at the top of the podium. The United States’ Zone 4, led by Chef d’Equipe Kim Land, continued to rack up the gold medals, as they topped both the $35,000 Junior Team Final, presented by Grand Traverse Resort and Spa, as well as the $40,000 Young Rider Team Final. Heading into Sunday’s Individual Final competition, Ansgar Holtgers Jr. leads the Junior standings, while Mimi Gochman stands as the current leader for Young Rider competitors.

Friday’s FEI NAYC show jumping competition kicked off with the $35,000 Junior Team Final, presented by Grand Traverse Resort and Spa. Following Thursday’s portion of the competition, it was the United States’ Zone 4 who sat in the leading position on a total of 6.15 faults, thanks to efforts by teammates Holtgers Jr, Zayna Rizvi, Reid Arani and Hailey Royce. After a tough two rounds of competition with the placings changing hands as each team member entered the arena, it seemed a medal finish would be anyone’s for the taking. The track designed by Ireland’s Alan Wade would test athletes on their ability to navigate with finesse and agility while still remaining in the allotted time. Multiple riders would almost produce a clear effort, but would find themselves unlucky as they crossed through the times with the final oxer down.

As the anchor rider for her team and the last to try her hand at the course for the second time, the pressure was on for Rizvi to put forth a solid round that would keep her team in top contention for a medal. Though Rizvi has only been partnered with Excellent, a 12-year-old Dutch Warmblood gelding owned by Peacock Ridge LLC, since the Winter Equestrian Festival (WEF) this past winter, their efforts throughout Thursday and Friday showcased how strong their bond already is. Rizvi navigated one of only four double-clear rounds from the day, ultimately securing her Zone 4 team the gold medal honors.

On her partnership with Excellent and the pressure as the anchor rider, Rizvi said, “ I think we bond really well and he always tries his hardest for me. I went last so I had a lot of pressure on me but I had faith in him and he was so good at every single jump. I think he tried really hard for me in the triple and at the water jump.”

Canada managed to notch just four faults during Friday afternoon’s two-round competition, good enough to push them into the silver medal position thanks to team members Lea Rucker, Sasha Maniaci, Hannah Rajotte and Austin Krawitt. Rounding out the top three to take the bronze medal was USA’s Zone 5/6, made up of Madelyn Cardelli, Caroline Nadalin, Alexander Alston and Hannah Hoch.

Heading into Sunday’s $10,000 Junior Individual Final Competition, Holtgers Jr. emerged as the group’s leading individual after producing a stellar double-clear effort aboard Elina, a 12-year-old KWPN mare owned by Gut Einhaus, LLC. He commented, “Words can’t describe this feeling, it’s amazing. My horse Elina has a lot of blood. She is a hot mare and she has a lot of personality. If she likes you, she fights for you. I hope that everything can go my way in the next two rounds for the [$10,000 Junior Individual Final], but you know this is already icing on the cake and an individual medal would just be an add on.”

With Friday’s Zone 4 win for the United States, Chef d’Equipe Land has emerged with multiple team gold medal finishes under her belt. She spoke highly of her Zone 4 Junior team, saying, “I expect this team to be a force to reckon with over the next couple of years, because they’re all young and they’re all really excellent riders and they have excellent horses. This really is the Zone 4 dream team, for me and hopefully I get to see them again for multiple years.”

Young Riders for the Gotham North FEI North American Youth Jumping Championships, presented by USHJA, made their way back into the International Ring of the Flintfields Horse Park Friday afternoon. Following Thursday’s first round of competition, it was Team Mexico who led the way with the $40,000 Young Rider Team Final still yet to come, with USA Zone 2 and USA Zone 1/3/7 trailing closely behind.

In a shakeup of events, Zone 4 would make the jump from fourth place to second following the first round of competition, putting themselves in contention for a medal. Led by Chef d’Equipe Land, Zone 4 posted no faults to the scoreboard in Round One with their drop score considered. However, teammates Erika Jakobson, Riley Delbecq, Violet Lindemann Barnett and Ashley Vogel would have to rally together in order to clinch the win from the other close contenders, Zone 2 and Canada.

“After the first round I felt really good. I was super pumped that he jumped clear. It’s definitely one of the more technical bigger tracks I’ve jumped,” shared Delbecq. “Then coming into the second round, I was pretty nervous coming back in but I tried to keep the adrenaline going.”

As Round 2 progressed, it became apparent that it would be down to the wire as teams fought for their spot on the podium. Austin Krawitt rode a steady course for Team Canada, guaranteeing him and his teammates at least a bronze medal for their 27.98 combined penalties. Vogel was the penultimate athlete aboard Bellissimo Z, a 12-year-old Zangershied mare. Vogel made a valiant effort through the finish line, keeping all fences intact and landing USA Zone 4 on a 15.79 combined penalties. Zone 2’s Gochman was the final athlete to take on the track, producing yet another clear performance for Zone 2. However, Zone 2’s combined penalties of 20.21 would place them right in the middle of Zone 4 and Canada, forcing them to settle for the silver medal honors while Zone 4 wore the gold and Canada wore the bronze.

Leading her second team of the day to gold, Land made note of Zone 4’s performance, “These athletes have been really coming together to produce amazing results. They all really look to each other to be a team. Some of them knew each other and some of them did not and they just pulled it together. They kept their composure in the second round from the speed yesterday to today and through each round they just got better and better. They kept moving up from fourth to second and then one fault so I’m incredibly proud of them for their accomplishment.”

Gochman still leads the way in the Individual competition with Celina BH. As the only pair sitting on zero faults from Thursday and Friday’s competition, Gochman spoke highly of the 11-year-old Holsteiner mare’s performances, adding that she still feels like she has plenty of gas left in the tank headed into Sunday’s Individual Final.

“Celina BH was excellent and I couldn’t have asked her to be any better. She was right there with me,” remarked Gochman. “It’s a little harder [to lead the Individual standings] this time around but I try not to think too much about it. I try not to get too excited because it’ll make me ride anxious or make [Celina BH] anxious, and I really believe the horses can feel what you’re feeling.”

In addition to taking home the gold and silver medals, the top two nations of the Young Rider category also qualify for the 2021 FEI Youth Nations Cup Jumping Final, set to take place at the Peelbergen Equestian Centre, in Kronenberg, Netherlands on September 23-26, 2021.

Adrienne Sternlicht Leaves It All On the Field for 1.50m Victory...