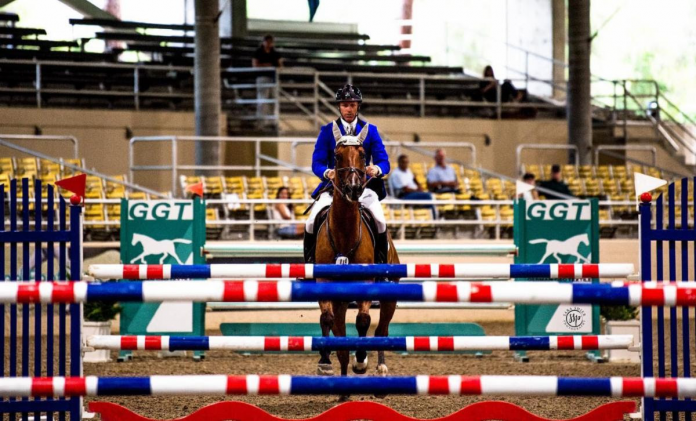 Over 20 horse and rider pairs riders navigated a technical first round track designed by Mike Gallaway with ten returning for the jump-off. Amateur rider Alexandra Bidwell, in her first grand prix was the first to jump-off aboard Geraldine Bidwell’s Acer, going clear and making the other riders chase her.
Mark Watring aboard his own Limbossini RC took second place, and rounding out the top three was Hanna Mauritzson on Ritz Fuente LLC’s Parkmore Lux.

“It felt fantastic to win,” Lane said. “I’m fortunate to have a really fast horse who enjoys going quick. The footing and atmosphere were great, and we can’t wait to be back here for the Riders Cup. We love showing at LAEC.”

The LEGIS Rider Bonus Program rewards riders who win multiple grand prix or hunter derby classes on the same horse. “It’s very exciting to get a rider bonus,” Lane noted. “Programs like this do not happen very often, so I’m appreciative of LEGIS for stepping up and doing this.”

For Chad, this win was a fun way to celebrate his birthday week. “Genuine has been quite the star lately, and I’m very proud of him,” he said. “The course was excellent and had some really nice options. We are having a blast here this week at West Palms Events. I couldn’t ask for a better way to kick off my 46th birthday.”

Chad is now in contention for a LEGIS Hunter Rider Bonus if he rides Genuine to another hunter derby victory during the 2021 West Palms Southern California Shows.

Avery Glynn and In Favor Capture Championship in Junior Hunter 16-17...