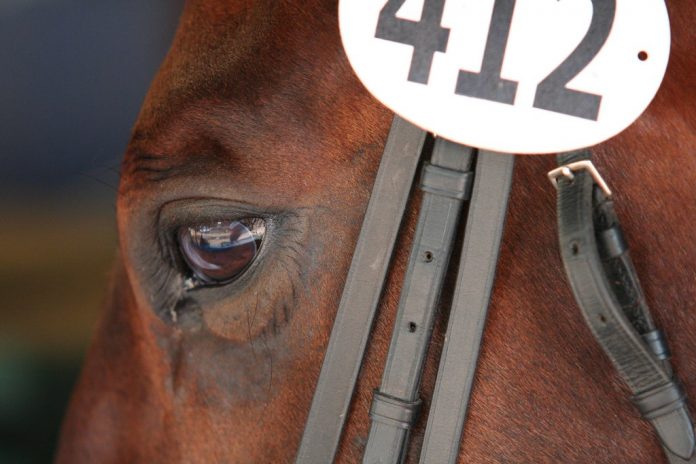 To jump or not to jump—that is the question facing my family’s senior equestrian.

“He doesn’t like to jump,” Mama declared emphatically one day.

“Did he tell you that? He is a top three in the hack hunter… I thought that was a unicorn,” I reply in the usual state of confusion regarding anything about horses.

“I can just tell. He needs a new job. We are going to do dressage together.  My horse has three solid gaits and he is very engaged when we learn a few dressage steps during lessons.”

“Okay dear, but I thought your horse was a kick ride, aka the great sloth who only shows flexibility when contorting himself to get the last oat that fell into the corner of his stall.”

“We got this; besides, you’ll like dressage. It is way cheaper than hunters and they actually have a schedule.”

My ears immediately perked up in a burst of instant skepticism; horses and cheaper are never used in the same sentence. It is like saying Kilimanjaro is smaller than Everest, but they are both pretty darn big mountains. I let out a guffaw at the schedule reference. It is a proven scientific fact that horse people can’t tell time.

One of mama’s barn friends at her hunter jumper barn is an eventer, so they loaded up a horse trailer and went to a local dressage schooling show together. Mama was over the moon. She won a blue ribbon and received two qualifying scores.

“It was awesome,” she gushed. “We had a ton of fun together. I want to do this more, but I need to get some stuff.”

“Uh-hunh. I thought dressage was cheaper.” I knew I was being set up. “What exactly did this show cost?” Barn and show bills are a carefully guarded secret around the house. They are never discussed and immediately shredded to destroy the evidence. What happens at fight club stays at fight club.

Wait what? I love you right now dressage, I thought. You’re my new favorite horse activity.

“Yes, you should get whatever you need.” I was already 5K ahead in a single weekend.

I had to go to a dressage show myself to see what this husband and dad paradise looked like while my wallet was still happily doing flips in my back pocket.

Here is what I now know about dressage:

“So, are you going to switch barns now?” I ask.

“Hell no, there is no way I am leaving my squad at the barn and the weekly sip and ride trail rides. I still have to jump, and my jumping horse doesn’t like the trails.”

So now we’re searching for a horse trailer with attached living quarters that fits her giant easy keeper former hunt horse aka the great sloth. I never doubt an equestrian’s superpowers when it comes to things involving horses— including backing up a trailer. So watch out dressage. Here we come.

Gordon Ballantyne is a horse show husband of fifteen years and horse show father for four.  His wife, Nicole, is an A circuit hunter rider trained at Starfire Farms in the Pacific Northwest while his daughter is a lead line specialist and shameless provider of horse treats.  Gordon is a homebuilder and author of America, The Eagle has Fallen; in his spare time (no such thing for a horse husband and father) he enjoys golfing, creating the perfect RV show set up and writing.  He is not shown in any of the horse pictures because that would violate the 10 foot horse exclusion zone he maintains at all times.