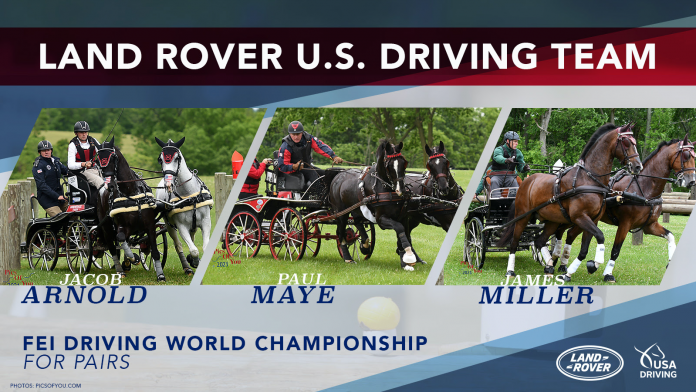 Lexington, Ky. – US Equestrian is pleased to announce the combinations selected to represent the Land Rover U.S. Driving Team at the 2021 FEI Driving World Championship for Pairs, which will take place in Kronenberg, the Netherlands, from September 8-12. Marcie Quist will serve as chef d’equipe.

The following combinations will represent the U.S. at the FEI Driving World Championship for Pairs and are listed in alphabetical order:

Competition Information
Find out more about the FEI Driving World Championship for Pairs.

The U.S. will not be sending any drivers to the 2021 FEI Driving World Championship for Ponies, which is scheduled for September 16-19 at Le Pin au Haras in France. After careful consideration, the four qualified athletes each opted to withdraw due to rising uncertainties around COVID-19 and international travel restrictions and expense. Their decisions were not made lightly as they worked extremely hard leading up to this season. We hope to see them back again for future U.S. Team selection.

The Canadian Children’s and Juniors Take Back to Back Wins!