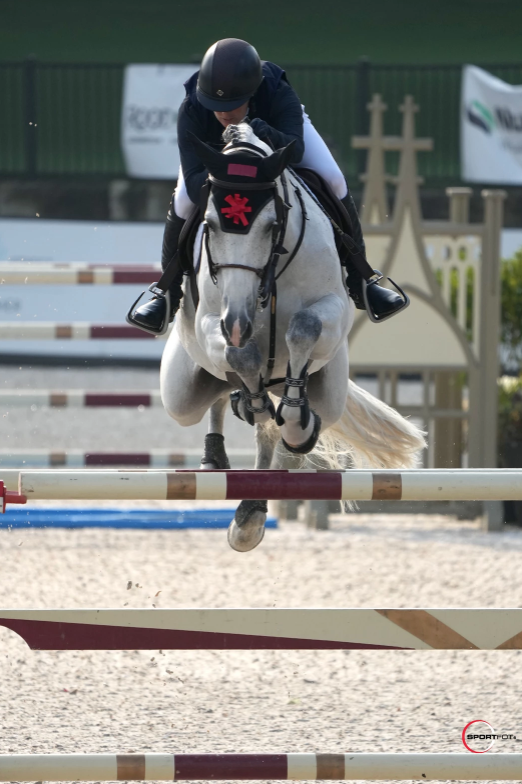 When Brooke Kemper met Arpeggi more than two years ago, she was not expecting to be introduced to her next grand prix horse.

Caroline Blum arrived at Kemper’s Shadow Pond Stables in Ocala, FL in 2019 with a 9-year-old gelding that was meant to take her into the junior jumper division. Arpeggi had been campaigned across the hunter, jumper and equitation rings. And when Kemper first got acquainted with the gelding, she quickly realized that the grey had not yet found his niche.

“He was very careful and sensitive,” Kemper recalled, “so I took over the ride for a while [to work with him].”

Kemper’s initial intent was to train the gelding for his owner, but as time went on the grey would become the longer-term mount of someone else—Kemper herself.

Inside Arpeggi, there was a lot of ability waiting to be untapped, and the more Kemper worked with the grey, the more she realized the scope of what he could do. After climbing the ranks with success at the 1.30m and 1.40m heights, Arpeggi made his grand prix debut in March of 2020; by the fall, he had stepped up to the international level.

“He’s an amazing animal,” Kemper said. “Every question we ask of him, he steps up and answers. When we pressure him and put him in a new situation, he steps up and wants to do it. He just keeps answering the questions.”

At the recent Tryon Summer Series in Tryon, NC, Arpeggi gave his most emphatic answer yet. Kemper and the grey finished second in the venue’s $137,000 CSI3* Grand Prix, missing the victory by just two-tenths of a second.

As first to go in the Tryon Stadium, Kemper and Arpeggi executed an early clear round over Ken Krome’s track. Inclement weather midway through the order would force the class to pause for the evening and resume the next morning. Kemper and Arpeggi walked in for their jump-off more than 12 hours after their first round.

“I’d never had to just walk in and go fast. We really weren’t sure what to do with that,” Kemper said. “In hindsight, it almost might have been an advantage. He might have been relaxed in the ring, not realizing he was going into a jump-off.”

Kemper’s goal was to just jump clear, but as she and her mount navigated the shortened track, their momentum began to build.

“It was probably one of fastest jump-offs I’ve ridden with him,” Kemper said. “The jumps just kept coming up forward off of the turns.”

Kemper believes Arpeggi has more to give. With the Blum family’s continued support, she aims to continue the gelding’s climb up the ranks.

“I just want to keep developing him through the levels,” Kemper said. “Maybe one day, we can make a [national] team.”

Since 2015, Shadow Pond Stables has tripled in size, with more than 35 horses in Kemper’s care. In 2016, Kemper’s now-husband Nigel Potts joined the team, just before their marriage in 2017. Based in Keswick, VA as well as in Ocala, FL for the winter months, Kemper has built her operation on her strengths: training, coaching and identifying equine potential.

She sees promise in 8-year-old gelding Rocket J Squirrel, owned by the Shadow Pond Group. The chestnut earned a USEF Horse of the Year award as a 7-year-old and stepped up to jump his first grand prix in Ocala this winter.

At the Lexington National in Virginia, La Vida Loca jumped to the Green Hunter 3’6″ Campionship and was the Reserve Champion of the USHJA Regional National Hunter

Shannan Gossman rode to a bronze medal in the USHJA Zone 3/4 Adult Amateur Jumper Team Championships with her own L-Geneva HS.

Blum and her own Tinsel were both Champions and Reserve Champions of the Amateur-Owner Hunter 3’3″ 18-35 division at Tryon’s summer circuit during Weeks 4 and 6, respectively.

Led by international show jumper Brooke Kemper and her husband Nigel Potts, Shadow Pond Stables is a full-service operation based out of Keswick, VA and Reddick, FL. A skilled and patient instructor, Kemper has found her strength in developing horses and riders at all levels of the sport. Shadow Pond Stables finds success across the hunter, jumper and equitation rings, from local shows to the top competitions across the east coast, as well as offers a select group of quality horses for sale.