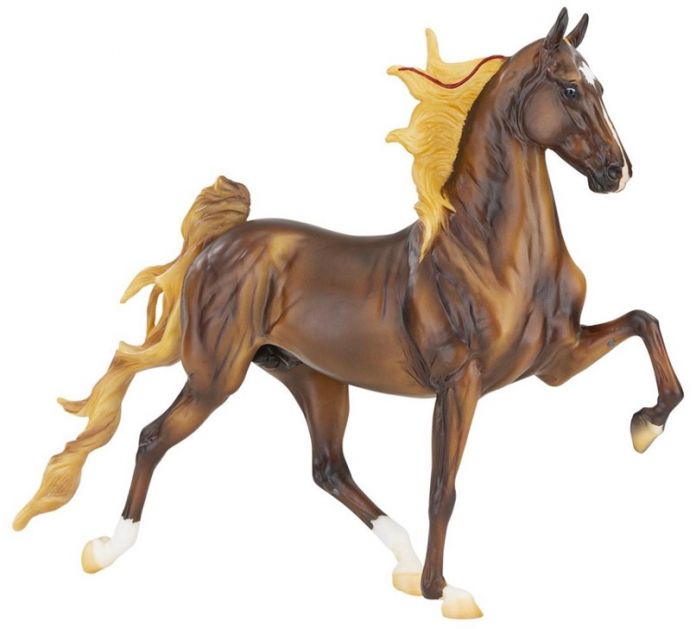 Louisville, KY — Owned by Gary and Carolyn Koch of Riverdreams, LLC in Chapel Hill, North Carolina, and trained and shown by Lionel Ferreira of Monnington Farm in Simpsonville, Kentucky, beloved Saddlebred Champion Marc of Charm, “The People’s Horse,” has been announced as a Breyer horse model.

“To say that we are thrilled to be one of the latest Breyer model horses is an understatement,” Ms. Koch said. “For our beloved champion to be immortalized as a Breyer model is an incredible honor and one that cements his status as one of the most iconic horses of the Saddlebred industry.”

“This is a dream come true for all of us, and we look forward to sharing the beauty and majesty that is Marc of Charm with Breyer fans and collectors worldwide,” she added.

Marc of Charm’s story is one that has the elements of a dream come true for all of his connections. He was one of the first Saddlebreds Ms. Koch, a noted breeder of champion Pug Dogs, purchased after seeing him as a weanling in a field. When Marc was just two years old, a young horse trainer named Lionel Ferreira saw the colt and knew he would be an exceptional horse in his heart. Those two events converged to forge a truly unique bond between Marc, his owner, and his trainer.

When Marc was just three years old, he and Lionel won the Lexington Junior League 3-year-old Five-Gaited Championship. That victory was only the first of many championship titles, blue ribbons, and red roses that the pair would go on to win together. During his final show ring performance in August 2015, Marc won the Five-Gaited World Grand Championship at the Kentucky State Fair World’s Grand Championship Horse Show in Louisville, KY.

“For the American Saddlebred, winning the Five-Gaited World’s Grand Championship is the pinnacle of a horse’s career,” said Georgia Bulmer Ferreira, Lionel’s wife and business partner. “On his way to winning that title, Marc became known as ‘The People’s Horse’ in our breed, because it took a few years for him to win. Every time he didn’t win, he got even more affection from the crowd. When he finally won, the crowd was chanting his name!”

After his historic victory in Louisville, Marc retired to stud at Monnington in 2015. To date, he has produced 112 registered get, including 26 world champions and 74 horses who have earned first through eighth place ribbons, as well as numerous accolades. In addition to sharing their sire’s skills and talents, many of Marc of Charm’s offspring have inherited his mild-mannered temperament and beautiful coloring.

“It doesn’t matter what division Marc’s babies are shown in. They are all very willing and able to be trained, and they enjoy a lot of success in the show ring,” Ms. Ferreira stated. “All breeders want to produce a horse that’s useful, and as my husband always says, even if you’re not sure you’ll breed the next gaited champion, you know you’re going to breed a handy horse that a family can enjoy and be competitive with.”

These days, Marc enjoys the good life at Monnington Farm under the careful supervision of Lionel and his breeding manager and best friend, Katey Smith. Marc enjoys getting scratches on his withers and drinking orange-flavored sports drinks when he’s not visiting the breeding shed or making special appearances at children’s events.

Riverdreams LLC and Monnington Farm hosted a by-invitation breakfast and press conference for the American Saddlebred Youth to unveil the new Breyer model on Thursday, Aug. 26. Guests were treated to a Q&A, autograph signing, photo ops and more at the event, which was held at The Saddlebred Cafe at the Kentucky Exposition Center Freedom Hall in Louisville, KY.

ABOUT MONNIGTON FARM: Monnington Farm is a Premier Saddlebred Breeding and Training Facility located in Simpsonville, Kentucky, and owned by Lionel & Georgia Bulmer Ferreira. Their goal is to breed and train top-quality show horses, emphasizing quality in every aspect of their facility. Lionel Ferreira has worked with Saddlebreds from an early age, and after leaving school, he went to Kentucky to work for some of the leading trainers in the industry to hone his craft. In 2010 Lionel & Georgia made the permanent move to Kentucky and opened Monnington Farm to the public. Lionel is well-known for his Selection, Breeding, and Training of top young horses and amateur horses alike. Georgia grew up around Morgan horses and is a lifelong enthusiast and exhibitor, and a trained Interior Designer featured in the leading 40 designer’s directory of London. Michigan native Katey Smith is the farm Breeding manager and handles the Broodmare care and Breeding division. She has spent her entire career dedicated to the care and development of this breed, and her incredible attention to detail is at the cornerstone of Monnington. New Hampshire native Sarah Mackenna handles the training duties alongside Lionel and is a graduate from William Woods University, and has spent years honing her craft to developing young horses and riders. For further information, visit https://www.monningtonfarm.com/ and follow them on social media at https://www.facebook.com/MonningtonFarm.

ABOUT BREYER: The world’s leading brand of horse-inspired toys, gifts, collectibles, and live events and founded in 1950, Breyer celebrates the beauty, power, and inspiration of horses with a dedicated commitment to authenticity, quality, and realism. Breyer is one of America’s most iconic toy and collectible brands, and its ‘portrait’ models of horse heroes like Secretariat and Black Beauty have been inspiring children and adults alike for generations. Breyer is developing original programming with Imagine Entertainment and has partnerships with major studios, publishers, and licensees. Breyer’s annual convention BreyerFest is one of the largest fan gatherings in the world celebrating the horse every July. Breyer is a division of Reeves International, a family-owned, New Jersey-based manufacturer. Discover the world of Breyer at www.BreyerHorses.com.

ABOUT BREYER #1847 MODEL, WGC MARC OF CHARM SADDLEBRED STALLION: Coming Soon – An American breed developed in the late 1800s, once known as the Kentucky Saddler, the Saddlebred is known for its smooth and showy movement. A Saddlebred show horse extraordinaire, WGC Marc of Charm, is known as “the people’s horse.” The chestnut stallion is a 7-0time world champion and world grand champion and was named the Five-Gaited World’s Grand Champion in 2015 for his excellent gaits and exuberant personality. Now retired from the show ring, he passes on his athleticism and attitude to the next generation of superstar colts and fillies—Breyer specs: Traditional, 1:9 scale, Ages 8+.

Caelinn Leahy Rides to a Victory and Style Award at Pennsylvania...