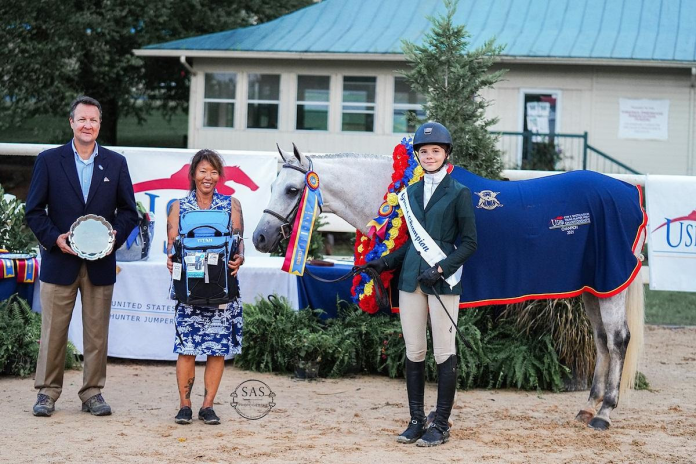 Lexington, Va.—Sept. 8, 2021—A record number of entries competed in the fourth annual Kym K. Smith/USHJA Young Hunter Pony Championships as more than 250 ponies taking to the ring at the Virginia Young Horse Festival on August 29. With $23,500 of prize money up for grabs, competition was big for such a crowd under 14.2.

Ridden by owner Grace Dupree, of Warrenton, Virginia, Wynnbrook Polar Vortex had success in the 6- and 7-Year-Olds 2’3” and 2’6” divisions to earn reserve champion in each, as well as the Overall Grand Champion title. The 2014 Welsh Cross gelding is a USHJA Young Hunter Pony Championship veteran, having won the 4- and 5-Year-Olds 2’3″ division in 2019 and the 6- and 7-Year-Olds 2’6” with Amy Krebs. Now, the Large pony has added another championship title to his record.

“I think all of Remi’s rounds were amazing. He was a bit excited after the storm, so we had some very jumpy lead changes. But he was a great listener and I’m so very proud of how he performed,” said Dupree. “He is the most forgiving and loving pony I know. I actually met him a year ago at this same show! His previous owner, Amy Krebs, sold him to us. Remi is the best boy and is going to do amazing things in the future!”

“I think this is such a great show for young ponies. Everyone was exceedingly nice and I loved the “swag bags” we won. This show is definitely one of my favorites,” Dupree continued.

New this year was the Adults on Ponies division, presented by Missy Jo Hollingsworth and Saddle Lake Equestrian Center. Erin Hastings, a Professional from Reston, Virginia, and Grayson, a 2014 Welsh gelding owned by Dale Crittenberger topped the division in its debut.

“Dale and I like to tease each other with who Grayson likes more, though we all know it is Dale. Dale showed Grayson in the model and he stood like a champ. It was as if he had done it his whole life,” said Hastings of the pony she dubbed Crittenberger’s “pandemic project.” “We showed outside under the lights around 8 p.m. I think with any green pony who has never shown under the lights before, one is never 100 percent sure how it is going to go, but Grayson really stepped up for the challenge. He jumped beautifully and as always, wowed the crowd. He has this unbelievably beautiful presence about him. I feel very fortunate to be a part of his undoubtedly successful career.”

The first division of its kind at a USHJA championship, the Adults on Ponies classes offered Professional or Amateur riders the opportunity to compete a pony in one under saddle; two over fences classes at their choice of 2’, 2’3” or 2’6”; and one model class. For young hunter ponies, this proved to be a valuable experience.

“It is an amazing opportunity for both professionals and adults to be able to show young ponies. There are not a lot of divisions that adults can do on ponies at regular horse shows, and I feel it is very important for young ponies to be as prepared for their kids as possible. It is hard to do that when professionals cannot show them most of the time,” said Hastings. “We need to give our young ponies the best chance they can have to be as successful as possible in the future.”

The USHJA congratulates the following division champions at the 2021 event:

5-Year-Old and Under Under Saddle

Adults on Ponies 7-Year-Old and Under