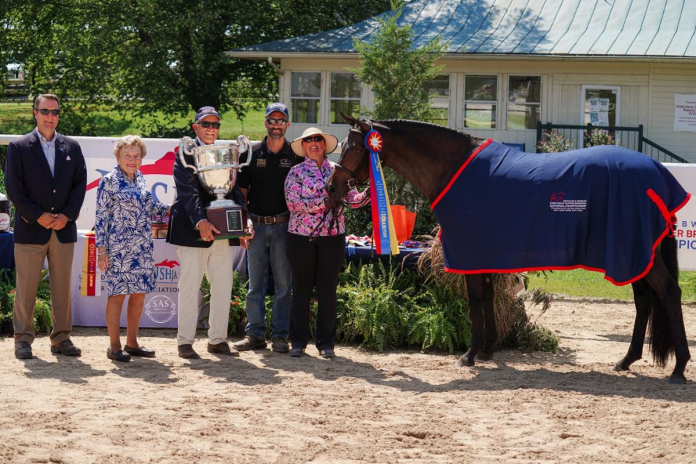 After winning the 2-Year-Old Filly class in 2020, Reality Star NHF returned to the East Coast Championship at Virginia Young Horse Festival in Lexington, Virginia, on August 28 with Emily Anne Belin-McDonnell, of Honey Brook, Pennsylvania, to top the 3-Year-Old Filly class and be named the Best Young Horse. As the leading East Coast filly, Reality Star NHF earned the Masquerade’s Cover Perpetual Trophy. The 2018 Oldenburg filly by Rosenthal and out of Feiner Dance, who is also the dam of 2019 Overall Best Young Horse Quite A Star, is bred and owned by North Hill Farm in Fabius, New York. With the win, Belin-McDonnell, who also handled the 2020 and 2019 Overall Best Young Horse winners, claimed the Leading East Coast Handler award and Belcourt Farms Perpetual Trophy for the fourth consecutive year.

“I have been partnered with breeder Maggie Neider at North Hill Farm for a long time. So we’ve had a really good partnership of us showing horses for her and she has a great program,” said Belin-McDonnell. “I have been involved with Reality Star since before she was even born. She came to my farm for the German Oldenburg Verband inspection as a baby in 2018 and they went absolutely crazy over her; she was just sensational.”

“She has a star quality about her—a star power we would say—that you can’t deny. She is stunning to look at; she is a very quiet, well-mannered filly. She is a sensational mover, and when you watch her move across the ground, she strokes the ground both at the walk and the trot as she moves. She has such a great use of her topline when she moves and a great athletic quality about her; it’s something that is very uncanny for a young horse of that age to be able to move so sophisticatedly and well beyond her years,” continued Belin-McDonnell, noting what made the filly stand out amongst the crowd. “One of the judges made a comment that they really wouldn’t have been hard-pressed to put tack on her and look like you’re going to walk her down to the Junior Hunter ring; she looked a little wise beyond her years even physically.”

The West Coast Championship at Blenheim Equisports’ International Jumping Festival in San Juan Capistrano, California, on September 22 saw Doug Snell, of Temecula, California, handle Only The Best, taking the 2-Year-Old Colt/Gelding class. By All The Best and out of Mosegardens Carina, the 2019 KWPN colt bred and owned by Tish Quirk, of Carlsbad, California, finished the day by claiming the West Coast Best Young Horse honor. Snell was awarded the Ted Fieger Memorial Trophy as the Leading West Coast Handler.

Coordinated by the USHJA since 2019, the Sallie B. Wheeler/USEF/USHJA Hunter Breeding National Championships aim to increase awareness of the Hunter Breeding sport and provide an arena for handlers, owners and breeders to showcase their talented young horses.

The Championships are open to yearlings, 2-year-olds, 3-year-olds and 4-year-olds of any breed that have a current USEF Horse Recording and are registered with the USHJA. In addition to in-hand classes, other offerings include an Amateur/Junior Handler class, 3-Year-Old or 4-Year-Old Hunter Under Saddle, 3-Year-Old Hunter Hack Classes and 4-Year-Old Conformation Over Fences classes. Horses are judged on athleticism, conformation, way of moving, quality, substance and suitability to become hunters. The same panel of judges officiate at both coasts’ Championships, then an Overall Champion is named following the final event.

“I love that the Championships always get super knowledgeable performance judges who come and judge these youngsters. These are people that judge and train horses at all the big circuits, and it’s really great to get a fresh set of eyes on them, which I particularly love because I feel like these folks have a great finger on the pulse of what’s winning in our sport in the performance divisions up through Palm Beach. When they get a chance to pick and sort through these youngsters and evaluate them, to get a ribbon under those folks is no joke,” said Belin-McDonnell of the Championships. “I’m really glad that all of ours made the cut. We showed in five of the six championship classes and we won three and were second in two. To me, that’s a great reflection that we are doing things right; we are raising and scouting the type of horses that people are wanting to see out there showing in the performance division. It just validates what we’re doing.”

A special thank you to the competition and facility management teams at the Virginia Horse Center and Blenheim Equisports for hosting the Championships.