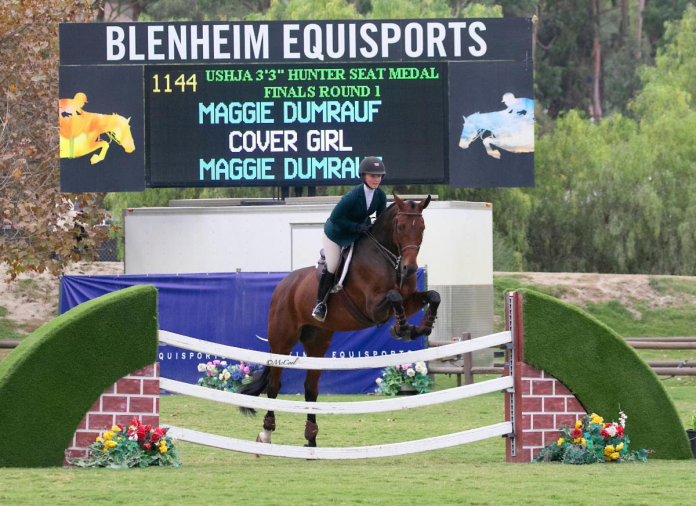 Three rounds of competition shuffled the equitation riders competing in the second annual Hunter Seat Medal Final, each course designed by Kerry Kocher, of Centre Hall, Pennsylvania, with Joe Dotoli, of Chepachet, New Hampshire, and Mark Jungherr, of Ocala, Florida, presiding over the class. Greer, of Newport Beach, California, found herself in front aboard Hollywood after the first round. The pair’s score of 87 put them in the lead just ahead of Mara Mihanovic, of Los Altos Hills, California, and Vulkano’s Boy with an 86. Mialuna Hutcheson, of Laguna Beach, California, sat in third with Starboy and an 85.

The top 25 horses-and-rider pairs returned to the second round, where Greer added an 86.25 for an overall score of 173.25 to further secure her lead. With an 86.5 and a two-round total of 171, Zoe Wolf, of Santa Barbara, California, slid into second on Catoon. Rising from eighth in the first round, Dumrauf, of Del Mar, California, and Cover Girl finished the second course in third after adding an 86 to their first-round score of 83 for a 169 total.

A testing of the top seven riders made adjustments to the judges’ final placings, moving Dumrauf into first. Greer and Walkenbach completed the top three in second and third, respectively.

“The work off was very challenging with turn on the haunches, trot jumps, hand gallop and haunches in/out. I think the work off was my best round because I know my horse and it showed how well we could perform the tests,” said Dumrauf. “Coming out of the ring after my final round was the best feeling. Wherever we landed in the placings I would be super happy with it because I felt confident with my riding and was incredibly happy with my horse.”

“If you asked me what my dream horse was when I was a kid, it would be Loulou. She has the sweetest personality and her absolute favorite thing to do is cuddle. I can’t express the amount of respect and love I have for this horse; she has done more for me than I could have ever asked for and continues to put a smile on my face every day. I bought her early this year as a jumper so it took me a few months to figure out her rhythm, but once everything came together, it made me so happy,” she continued of her mount, Cover Girl.

For her win, Dumrauf received a ribbon, sash, cooler, keeper trophy, a pair of Parlanti boots, a gift from Straight Arrow and an Essex Classics Show Shirt.

“All the tests from the final were very challenging but allowed for great competition. The class was a fantastic experience and is such a fun medal final. I’m excited to take some of the things I learned from the class and further my success in the show ring,” Dumrauf said. “Being this year’s winner is such an honor as winning a medal final has been a huge dream of mine for many years. I’m so grateful for my amazing trainers, Hailey Scharping and Mclane Peed, for everything they have done to help Loulou and I succeed. I’m truly so thankful.”

“I am so proud of all three of Maggie’s rounds! She stayed focused and consistent. The work off asked a lot of questions and she knew all the answers! She was very slick and left it all in the ring, which definitely paid off,” said Scharping.

The USHJA 3’3” Hunter Seat Medal serves as a stepping stone for equitation riders, providing an opportunity to qualify and compete in a national equitation final at fence heights of 3’3”. The Medal is open to Junior riders, who have not competed in any of the following National Equitation Finals with fences at 3’6” within the same competition year, including USHJA Gladstone Cup Equitation Classic, ASPCA Maclay Finals, USEF Hunter Seat Medal Finals, USEF Show Jumping Talent Search Finals (East or West), WIHS Equitation Classic Finals, Jump Canada Medal Finals or the North American Equitation Championship. This year’s East Coast Final will take place October 23 at the New England Equitation Championships at the Eastern States Exposition Center in West Springfield, Massachusetts.