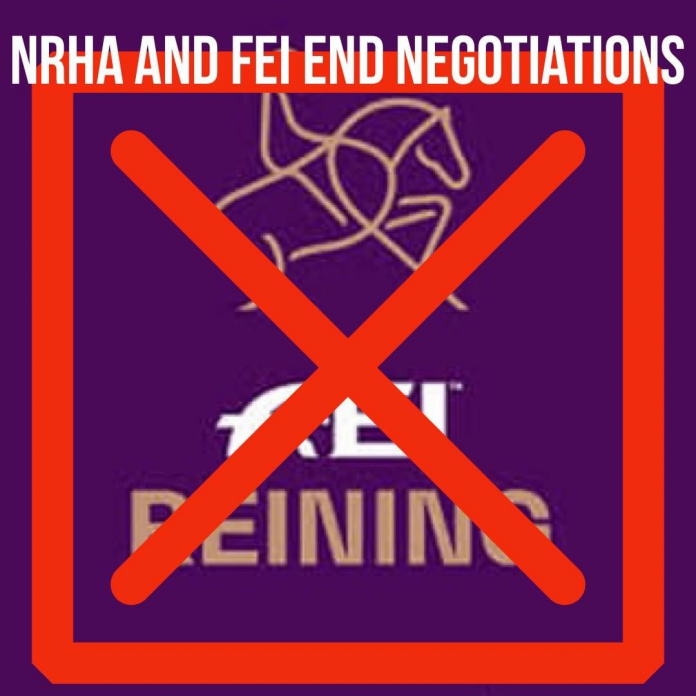 The National Reining Horse Association (NRHA) and the Fédération Equestre Internationale (FEI) collaborated for more than 20 years to showcase and expand the sport of reining worldwide while creating historic memories valued by many.

Unfortunately, countless impediments throughout the relationship – legal, cultural, structural, and financial in nature –  presented numerous hurdles over that time, and include recent FEI actions. Therefore, the NRHA leadership made the decision not to move forward with a new FEI agreement.

Although it was announced that FEI had terminated the original agreement in 2020, a new Memorandum of Understanding between the two organizations was approved by the FEI Board of Directors in June 2021. The NRHA Board of Directors, Executive Committee, and Task Force members were comfortable with that agreement, which would have created a framework for a limited group of international championships.

Then, an entirely different agreement was drafted and submitted to NRHA on September 15, 2021. “We are unsure of what led up to this development, and why NRHA was not consulted,” noted NRHA President Rick Clark. “At this time, the Executive Committee, with the support of the NRHA Board of Directors, has made the decision to not move forward with a new agreement with FEI.”

NRHA Commissioner Gary Carpenter expanded on Clark’s statement. “NRHA has worked diligently over the past two years to collaboratively negotiate a new agreement and made it a top priority for the association. Through our Executive Committee, Board, FEI Task Force, and staff, we remained fully committed to working closely with the FEI, and were excited for what the future held,” he said. “Unfortunately, a lack of direct and clear communication from FEI has been one of the biggest hurdles. We have constantly seen the goal post move further out of reach, to the point where a relationship is no longer feasible or beneficial to our members.”

Both Clark and Carpenter noted there is no ill will towards the FEI, its leadership, staff, and members. “We are thankful for everything the FEI has done for reining and the reining horse over the years, and proud that reining was able to contribute excitement in the form of an alternative discipline in the FEI World Equestrian Games™. We hope that in the future we may be able to work together in some capacity,” Clark shared.

The National Reining Horse Association is a nonprofit organization dedicated to promoting and enhancing the sport of reining through a core mission: “Respect the Horse. Respect the Sport.” Founded in 1966, NRHA now has nearly 15,000 members and sets the standards for reining worldwide. Reining is an international sport and continues to grow year after year by offering opportunities for horse enthusiasts of all ages.