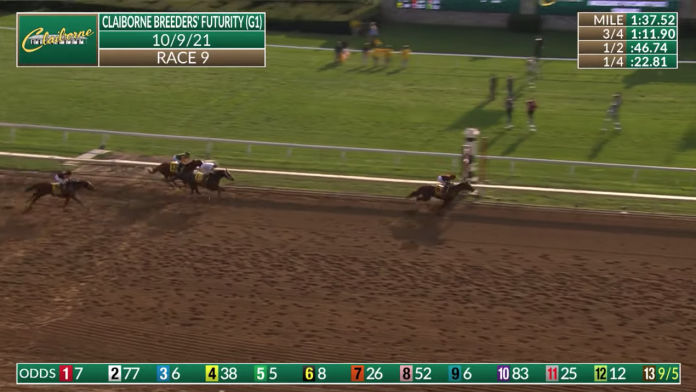 Rattle N Roll not only won his first Grade 1 Saturday at Keeneland, but did it impressively with a stretch run finishing four and a half lengths in front in only his fourth lifetime start.

Keeping his cool on the backstretch in eighth place, he ran with the pack until Jockey Brian Hernandez, Jr took him wide in the final turn to gain the lead at the final furlong pole. He opened up and galloped easily to a convincing win.

“[I’m] thrilled for Lucky Seven Stable [and] fortunate to have owners like Mike Mackin who give me the opportunity to buy and train horses like Rattle N Roll. [I’m] excited to see what comes next for him,” said Kenny.

Regardless of his premature pop through the starting gate, Tiz the Bomb rallied to a solid finish to claim victory in the Grade 2 Castle & Key Bourbon Stakes.

Jockey Brian Hernandez, Jr took the colt to the outside, found an opening and rallied to the lead in the final furlong winning by three-quarters of a length. This is the first graded stakes win for this two-year-old colt by Hit It A Bomb. In only four starts, he has three wins, including the Kentucky Downs Juvenile Stakes in September.

“It’s never a good thing when a horse jumps through the gate” said Kenny. “Tiz The Bomb settled in and performed like an older, seasoned horse. What a feat for this colt.”

Three-year-old Crazy Beautiful increased her lifetime earnings to $801,925 by winning the Seneca Overnight Stakes on October 1st. Holding on to defeat Played Hard in the stretch, she picked up her sixth win in a dozen starts. Congratulations to owner Phoenix Thoroughbred III Ltd and jockey Brian Hernandez, Jr. Kenny was awarded Churchill Down’s Top Training honor – Leading Trainer by Earnings in September.

Three-year-old King Fury dominated the Bourbon Trail Stakes, winning by 13 lengths. Jockey Brian Hernandez, Jr. said he knew his job and never needed to ask. The son of Curlin is out of the Grade 1 winning mare Taris by Flatter. Congratulations to Fern Circle Stables and Three Chimneys Farm.