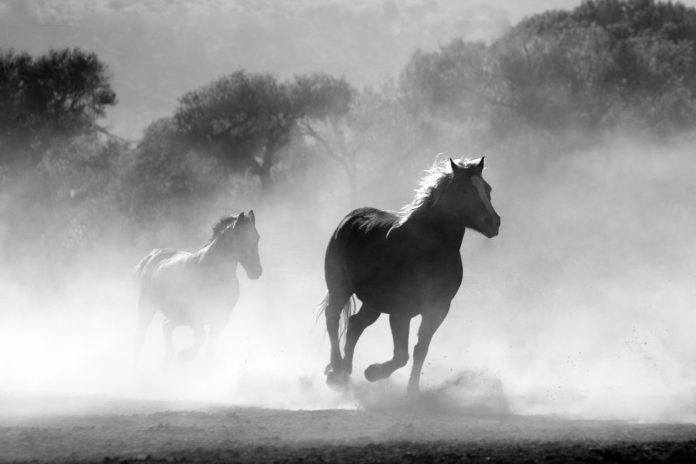 Horses feature quite prominently in slot machines. From wild horses running on the American plains and mythical Greek beasts to horse racing in the UK, regions of beautiful US, and South Africa, it’s a theme that allows developers to tap into their creative sides.

Just take a look at all of these great slot machines that are based on our four-legged companions.

Age of the Gods: Ruler of the Skies

Ruler of the Skies is a slot based on the mythical Pegasus, a winged horse that was created from Medusa’s blood after the Gorgon’s head was chopped off by Perseus.

Pegasus plays a role in a few different Greek myths, the most notable of which is the story of Bellerophon, a hero who captured Pegasus and rode him when he defeated the Chimera.

Ruler of the Skies is a beautiful game that perfectly captures the majesty and mythos of this winged beast. It’s also part of the Age of the Gods slot series, which means it comes bundled with one of the biggest progressive jackpot systems in the industry.

Players can win one of four jackpots every time that they spin, and there are other features as well.

For similar games, check out other Age of the Slots titles as well as the Kingdoms Rise series, which takes players through beautiful and fictional terrains that span a variety akin to the mountainous regions of beautiful Chile, the deserts of Australia, and the islands of Indonesia.

The Wild Horses slot features 5 reels and 50 pay lines and tasks players with choosing between fire and light, both represented by horses.

The main game screen is split between darkness and light to represent these two horses and there are numerous big paying symbols and features, including the two main horses and a big Wild.

If you’re looking for a game that combines unicorns with fiery horses from the pits of hell, one that blends myth and magic with natural beauty (not unlike Age of the Gods: Ruler of the Skies), this could be the game for you.

Frankie Dettori is considered to be one of the greatest jockeys in the history of the sport. The Italian rider has won hundreds of races and claimed countless accolades over the years, but he is probably best known for winning all 7 races during a single race meet.

This became known as the “Magic Seven”, and in later years, it would inspire the creation of the Frankie Dettori’s Magic Seven slot machine.

This horse racing-themed title takes place at the racecourse in question and includes many images of Frankie Dettori, including one taken as he celebrated victory following his epic achievement. There are several big payouts to secure and a variety of features, all of which have a distinctive horse racing feel to them.

The biggest payout for a single spin is 7777x and comes from the Wild symbol, which also depicts Frankie Dettori.

The Derby Dollars slot was developed by RTG and features 20 paylines spread across 5 reels. It is a horse racing-themed slot machine that’s based around a big derby race. The Wild symbol triggers payouts of up to 3,333x, there are 25 Free Spins to collect during the bonus feature, and it also has a progressive jackpot that can be triggered at the end of any spin.