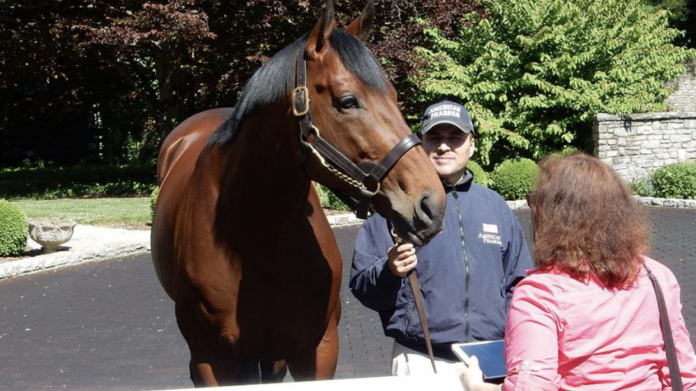 American Pharoah was one of the greatest racehorses in the history of American thoroughbred racing. Bob Baffert’s charge enjoyed a dominant run in 2015 when he won the Triple Crown along with the Breeders’ Cup Classic. He became the first horse to win the Kentucky Derby, Preakness Stakes and Belmont Stakes in 37 years and then added the Grand Slam with his brilliant run in the Classic to bow out on the highest of notes.

The bay colt was retired after his victory at Keeneland and turned into a stud-horse as per the instructions of his owner Ahmed Zayat. Baffert has continued to enjoy success even without the presence of American Pharoah, training Arrogate and Authentic to victories at the Breeders’ Cup Classic along with the Kentucky Derby in the case of the latter. Another one of his hopefuls Medina Spirit is one of the leading contenders for the 2021 Classic in the horse racing betting odds, boasting a great pedigree on the track.

Pedigree and quality stock is one of the all-important factors in creating a champion racehorse. Since American Pharoah retired six years ago, he has sired a great number of horses. Due to his excellence on the track, you would have believed that his progeny would follow suit, especially if paired with a suitable dam. However, it has not been the case for the Grand Slam winner of 2015 as his sons and daughters have failed to match his brilliance.

Van Gogh displayed potential in the United Kingdom and Ireland towards the end of his first season as a two-year-old. The American thoroughbred won at Curragh and ended his campaign with a brilliant run to triumph in the Criterium International. However, he didn’t manage to kick on as a three-year-old, failing to compete in the 2,000 Guineas, Irish Guineas, Irish Derby, and Prix du Jockey. Aidan O’Brien has dominated the racing scene across the pond, but not even the great Irishman was able to get a performance out of the charge with a number of his experienced jockeys.

Harvey’s Lil Goil has been the best out of the progeny of American Pharoah to date, mustering the highest career earnings in the States. She put forward excellent performances in the Regret Stakes and Queen Elizabeth II Challenge Cup Stakes as a three-year-old. Although Harvey’s Lil Goil enjoyed a strong start to the campaign with a victory at the Beaugay Stakes to start the 2021 season, she failed to kick on for the rest of the year, failing to compete for the major honors on offer.

As Time Goes By threatened to buck the trend when she won the Santa Margarita Stakes and the Santa Maria Stakes at Santa Anita early in 2021, but her progress slowed over the course of the term. There were signs of life in the Zenyatta Stakes when Baffert’s charge placed second in the contest. However, As Time Goes By appears to lack the clinical edge of her father down the stretch in elite races, although she is not alone in that aspect to date.

There is plenty of time for that to change and Mackinnon could be the one to watch, winning all three of his races as a two-year-old, including the Zuma Beach Stakes at Santa Anita. So American Pharoah’s stud career has not produced top results, but there could be hope for the future.