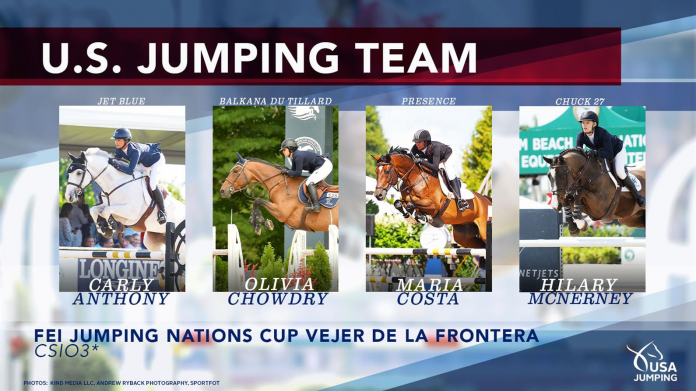 Vejer de la Frontera, Spain – A team of four FEI Nations Cup debutantes represented the U.S. at the CSIO3* Victoria Nations Cup at Week 4 of the Sunshine Tour in the province of Cádiz, Spain.

The U.S. was one of 20 countries fielding teams for the Nations Cup competition, and finished in a tie for 11th place out of the competitive group.

“It was all of our U.S. athletes’ first Nations Cup and they did very well,” said Chef d’Equipe Anne Kursinski. “With 20 teams, it was a tough technical course, and we missed getting into the second round by less than one rail. It was a wonderful experience for all of them. We’re looking forward to FEI Jumping Nations Cup Vilamoura!”

Maria Costa (Wellington, Fla.) and Ravello Farm, LLC’s 2008 Holsteiner gelding Presence were the trailblazers for the U.S. team, and they made quick work of the course, dropping just one rail at the start of the triple combination and finishing with no time penalties.

Olivia Chowdry (Denver, Colo.) and Balkana Du Tillard, a 2011 Selle Français mare owned by Atlas Equine Holdings, LLC, kept the rails up but had a foot in the water and a single time fault to finish on a five-fault score.

Hilary McNerney (Wellington, Fla.) and her own Chuck 27, a 2007 Hanoverian gelding, expertly handled some of the course’s tougher elements but had a pair of rails down and a single time penalty for a total score of nine faults.

Carly Anthony (Wellington, Fla.) and Portfolio Horses LLC’s 2011 KWPN gelding Jet Blue had an excellent round with just one late-falling rail on the final jump. They finished well within the time to add just four faults to the American team’s score. The team total of 13 points put them in a tie for 11th position after the first round in a very tight race.