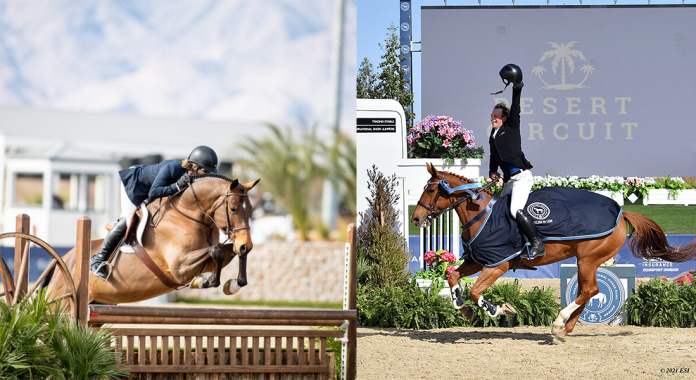 The Plaid Horse will return to Thermal, CA this winter as an Official Media Partner of the Desert International Horse Park.

With nearly 1.3 million square feet of competition and riding space, the Desert International Horse Park is one of the largest equestrian facilities in North America, and the Desert Circuit plays host to competitors from all over the world travel, who visit the venue to not only compete but to also enjoy everything the desert has to offer.

The highlight of the venue’s calendar is the Desert Circuit, which will consist of eight weeks of “AA” rated USEF Premier competitions between January and March 2022, including five FEI weeks up to the CSI4* level and two CSIU25-A weeks. Among the other highlights of the season are two World Championship Hunter Rider weeks, the USHJA West Coast Hunter Spectacular; three USHJA International Hunter Derbies; the R.W. Mutch Equitation Championship; and an NAYC Zone 10 qualifying event, among others.

The Desert Horse Park has truly become a multidisciplinary venue. It also hosts dressage competition through the Adequan® Desert Dressage Series and was recently selected by the United States Equestrian Federation (USEF) to host a CPEDI3* para-dressage event during the 2022 winter season. During November’s National Sunshine Series, the NCEA Western Region Finals will also take place at the facility.

In December, DIHP will feature five-star competition for the first time as it hosts the Major League Show Jumping season finale on its brand new grass field. MLSJ features eight teams that face off in an innovative head-to-head competition before concluding with a CSI5* Grand Prix.

The Plaid Horse and The Plaidcast will provide expanded coverage of DIHP events from November 2021 through March 2022 and will be onsite throughout the 2022 Desert Circuit.

“I’m thrilled to be able to continue The Plaid Horse‘s involvement with the Desert International Horse Park through this new Official Media Partnership,” said The Plaid Horse Publisher Piper Klemm. “The upcoming season will mark my 11th consecutive year in the desert and the 15th year that The Plaid Horse will have a media partnership with the venue. I’m looking forward to another great year ahead with both an expanded schedule and coverage!”