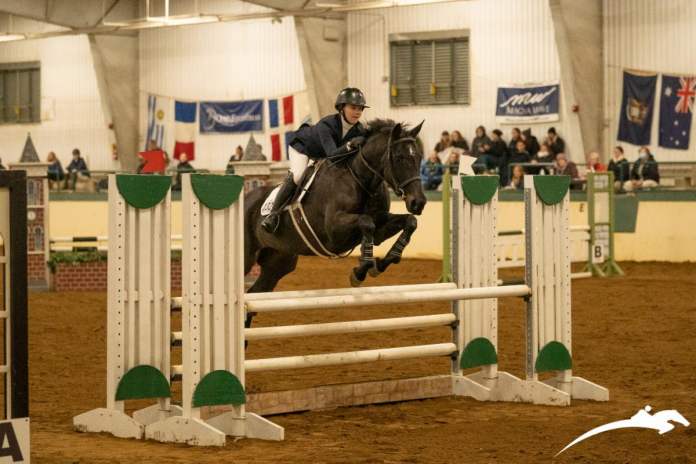 Painesville, Ohio—Nov. 15, 2021—It was Aedan Mooney who rose to the top of a group of 16 exceptional athletes following several days of riding and stable management at this year’s Lindsay Maxwell Charitable Fund/USHJA Emerging Athletes Program National Training Session, which was held at Lake Erie College Equestrian Center in Painesville, Ohio.

“This program is amazing, and even just being here is amazing,” Mooney said. “It’s just such a cool experience and winning is beyond my expectations. I am just so thankful.”

Mooney, 16, of Golden, Colorado, was a first timer at Nationals this year, but she quickly impressed Lead Clinician Peter Wylde and the Emerging Athletes Program Committee with her riding and ability to adapt to different horses as well as her eagerness to learn and be engaged in the barn.

“I must say we were really impressed with Aedan’s riding throughout the weekend,” Wylde said. “We felt like she just displayed an incredible style of riding, which we loved; feel for the horse; understanding and she actually had quite a difficult horse to ride.”

Mooney showcased her ability to handle adverse situations and adapt to new horses quickly throughout the training session.

The EAP Committee decided to bring back five riders—Mooney, Annalise Manoog, Ellie Kurtz, Nicole McMillion and Clare O’Brien—and switch them to different horses to complete a work off after the Nations Cup competition on the final day.

“We had five riders in the workoff, which it isn’t often that we have five,” Wylde said. “But this was such an exceptionally good group of kids, all five riders had fantastic weekends and rode really well, and there were even probably three more or four more that could have been up there, but we had to at some point draw the line.”

Mooney received Parlanti paddock boots, SmartPak quick wraps and a leather halter and a Boy O Boy Bridleworks belt as the Champion of the session. She will receive a $3,000 training grant from USHJA to be used for advancing her training with an approved trainer. She was also invited to ride in a USHJA Gold Star Clinic.

Reserve Champion Annalise Manoog, 17, of Centerville, Massachusetts, also stood out to Wylde and the committee on both the horse she drew and the horse they switched her to for the workoff. She said EAP has been a great experience for her.

“I had so much fun this week. I had a really good time being able to ride two really cool horses, two completely different rides than what I’m normally used to,” she said. “I loved doing all of the seminars, not only the riding with Peter, but everything back in the barn with Colleen and all of the other different other clinicians that they brought in. I thought it was really special to learn so much in just a couple of days.”

As reserve champion, Manoog received SmartPak quick wraps, a leather halter and a handwoven belt from Boy O Boy Bridleworks. She was also invited to participate in a USHJA Gold Star Clinic.

The EAP Sportsmanship Award, which is decided by EAP participants, went to Cameron Trimino. Trimino received a gift certificate from USHJA Official Sponsor CWD. The Charles “Chuck” Keller Grant for Equestrian Excellence was awarded to Mia Jones. Jones will receive a $500 grant to be used to further her training.

All riders received a gift from Essex Classics, Straight Arrow Family of Brands and SmartPak.

The USHJA extends special thanks to all of the individuals who donated horses for riders at the National Training Session. This year’s donors were Lake Erie College, University of Findlay, Kylie Cohen, Heather Froehlich-Cortell, Erica Gaertner, Mary Roskens, Deloise Noble-Strong, Noell Sivertsen and Danielle Weddle.

“It takes months to gather together a group of 18 horses that can participate,” Mary Pardee, director of riding at Lake Erie College, said. “We know that we have some that we can contribute from our herd, but we rely on other professionals and other schools to loan us these horses, which is incredibly generous.”

Stable Management Clinician Colleen Reed also worked with participants throughout the week on their stable management skills, walking them through different potential scenarios that they may come across in the barn and best practices for the health and safety of the horses.

“Every clinician, every professional, every person I worked with this week was amazing,” Mooney said. “They were super helpful whenever I needed them. I felt like I could go up to anyone and ask them any question and they would help me whenever.”