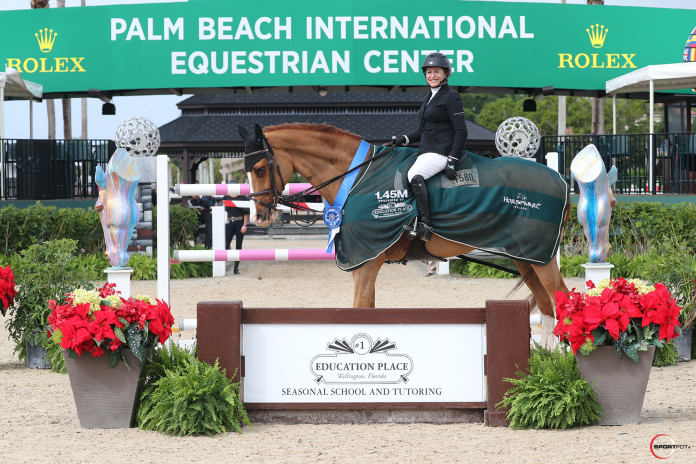 Wellington, FL – November 20, 2021 – The penultimate day of the ESP Pre-Charity CSI3* horse show on Saturday offered jumper competitors their final chance to compete for FEI points ahead of the $137,000 NoltrexVet® Grand Prix CSI3*, which will take place on Sunday as the highlight event of the competition. In the $37,000 #1 Education Place 1.50m CSI3*, the final class of the day in the International Arena, Margie Engle (USA) and Jackofhearts, a 9-year-old Danish Warmblood gelding by Heartbeat x Baloubet du Rouet owned by Gladewinds Partners LLC, proved their prowess by finishing as the swiftest of only two double-clear pairs over designer Héctor Loyola’s (PUR) tracks to claim victory.

“I just got him a few months ago, and when he first came over he had trouble acclimating and needed work done on his teeth, so I didn’t get to show him for awhile. I think this is only my third show with him, and this is our first FEI win together,” commented Engle. “I love him. He has a little different technique and is a little bit built upside down, but he has a great attitude and I like that he is uphill. He reminds me a little bit of Dicas. He is very light on his feet and has nice blood, and without trying to go fast he covers so much ground. For being as green as he is, he is very good at looking for the jumps. He stays really careful, especially for a big horse, on the gallops, which is great. I’m just getting to know him, but I really like him so far. Right now he just needs more muscle, flatwork, and some miles on him.”

The first round of the $37,000 #1 Education Place 1.50m CSI3* featured efforts from 24 challengers representing 11 nations from around the world. The United States posed the greatest threat of victory with 10 pairs in the running, but they were joined by duos from Colombia, Mexico, Great Britain, Israel, Brazil, Egypt, Ireland, Venezuela, the Dominican Republic, and Belgium. From the starting field of 24, seven partnerships qualified for the jump-off, with Engle and Jackofhearts adding their names to the list as the sixth qualifying team.

As the second-to-last to ride over the abridged course, Engle and her mount were up against a time of 41.01 seconds from Filip de Wandel (BEL) and Nanking VD Donkhoeve, the only pair that had completed the pattern without incurring any faults. Engle and Jackofhearts took their turn around the ring, crossing the finish line with time to spare in 39.43 seconds without any penalties. The final pair in the class could not match their performance, solidifying Engle and Jackofhearts as the winners of the class.

“I thought it was a good course, definitely technical. It was tough enough, especially for those of us who are saving our main horse for the grand prix tomorrow, so we are on our second horse today,” remarked Engle. “ This is only the second jump-off I have done with this horse, so I didn’t want to go crazy. While we are developing him, I don’t want to ask too much to keep his confidence up and to make sure he trusts me. Since there was only one other clear round. We didn’t have to do anything nuts to get the win today, which worked out well for us.”