In a circle of people I’m comfortable around, I’ve always been fairly vocally opposed to psychiatric medication. I declared they’re over-prescribed and rarely taken alongside proper counseling/talk therapy. The majority seek happiness in the form of a pill. A quick fix—or so I thought.

Mind you, I have no medical or psychological training whatsoever. But these opinions weren’t entirely unfounded. My late husband had a history of addiction in his youth. Two decades later, he marched into a psychiatrist, read a list of ADHD symptoms off a website, and was immediately given a maxed-out prescription for Adderall, a controlled substance. A year later, he was stressed out at work and went back multiple times to get Xanax and Klonopin, more controlled substances. Though these drugs have their place, they are highly addictive. The combination of uppers and downers, all legally prescribed from a doctor, started him back on a path to “better living by chemistry” that led to his addiction resurging and ultimately his death by accidental overdose.

Suffice to say, I have a little baggage with psychiatrists.

Flash forward many years, and I’m in therapy doing the work after trying to “tough it out” on my own for far too long. But after a year of counseling, I still struggled with many things. I fell into swings where life held little joy, including friends or riding or things I typically love. It was hard for me to get out of bed. The dark thoughts followed me closer than I cared to admit. As I explained all of this to my therapist, she gently suggested I consider medication.

“But I’m fine,” I snapped at her. “I still get my work done. I shower when I need to shower. I drag myself to the barn. I get what I need to get accomplished.”

“Yes,” she slowly explained in that non-confrontational tone that therapists have perfected. “But your baseline isn’t very high. I think there’s a lot of room for improvement.”

It took some reflecting, but I finally agreed with her. Though I didn’t look like the stereotypical view many of us have of depression, I was very depressed. No amount of exercise, healthy eating, or my beloved barn time was putting a dent in my symptoms. So after a lot of support and coaxing from my therapist, I dragged myself to the dreaded psychiatrist and started taking antidepressants.

But what does any of this have to do with riding?

Because I am an overachiever, I don’t just carry a depression diagnosis but also generalized anxiety. Since I don’t have physical panic attacks, it’s something I’ve always kind of written off. Everyone worries all the time, right? If my horse so much as coughed, I’d spend an hour researching COPD online. If he had a tough session with my trainer, I worried if we’d ever make it in the hunters and wondered if I should go ahead and start looking for a dressage barn. If he looked at something in the pasture, I worried he would spook. I panicked if I missed a distance because surely my terrible riding would turn him into a stopper!

And these are just the worries related to the barn. There were a lot more worries.

I didn’t sleep well at night. I’d scroll on my phone for hours to try to distract myself from the worries (didn’t work), and when I did manage to fall asleep I woke up in the middle of the night completely alert about some panic or another. All of this was on top of my depression symptoms, which made doing anything but laying around feeling like it took a Herculean effort.

The antidepressants didn’t work overnight, but I slowly began to see a difference. First, it was easier to fall asleep. Soon I began sleeping through the night. I had a little more energy. I’d start to worry, opening up a google tab to do a familiar deep dive on some health scare or crisis, but would read an article or two… instead of twenty. It’s hard to describe the overall feeling, but everything began to smooth out.

I’ve always been so skeptical about psychiatric medication that I failed to ever consider the benefits it could bring me when given correctly by an ethical professional. I sheepishly admitted to my therapist how much better things were going. But one of the places I felt the biggest difference was at the barn.

I’m not sure when it started or how long it lasted, but for literal years I’d imagine practically every bad thing that could happen to me in the saddle. If I was walking around and the horse stumbled, my brain would immediately picture us both tumbling down. I could practically feel the ground thud under me, even though nothing happened. Jumping? Oh lord. I was more concerned about making it to the other side than my equitation. I saw stops, flying poles, and giant crashes as I cantered up to things. I don’t have to explain how harmful this all is to one’s riding, but I didn’t realize how bad it had gotten until it stopped.

Today, my confidence grows each week. No part of this is undoubtedly due to my new horse, who is a saintly partner that is safe and fun and just an all-around sweetheart, but a lot of it is my mental game as well. When he clogs through a pole or drags a toe in the field, I sit up and think, “Hey dude! Let’s pay attention to our feet!” instead of bracing for a crash that hasn’t happened. In the rare occasion that he spooks, I can give him confidence instead of going OH GOD YOU’RE RIGHT WE’RE BOTH DEFINITELY GOING TO DIE! Jumping has become fun again.

This is not to say that I think everyone with confidence issues, fear, or a sense of worry should run off to a psychiatrist and ask for pills. There are a lot of jokes, especially with adult amateur riders, about “popping Xanax” or similar pills at horse shows. Mental health still carries a stigma in our society. I understand the need to deflect with a joke (this is one of my favorite coping mechanisms) when it comes to things like therapy or psych medication. But that kind of cavalier attitude can lead to problems, especially with controlled substances which many psychiatric drugs are.

That being said, we can’t overlook the importance of our mental health when it comes to success in the sport—success in life. For a long time, I believed that was a “mind over matter” situation. I thought therapy was the only appropriate support. But for me—for many of us—it’s a big picture thing. My brain is imbalanced. I need the right prescription. I don’t know if I’ll need it forever, but I need it right now. My psychiatrist is a total hippie who knows absolutely nothing about horses, but he is not a crook or drug dealer pushing pills willy nilly my way. Right now, he’s a necessary member of the Lauren support squad. And that’s okay.

If you’re reading this post and recognize some of yourself in these paragraphs, I, unfortunately, don’t have any answers to offer. Just my story. I had a foolish opinion that these drugs were the easy way out. Then I needed them myself. And I’ve found that even with my little daily 20mg “happy pill,” life still isn’t easy. But being able to breathe, soothe myself, and see things more positively is an immeasurable improvement. For me, my horse—for everything. 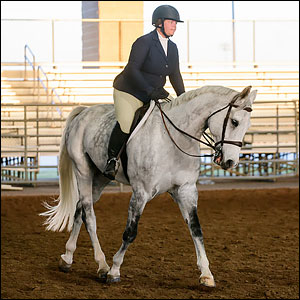 About the Author: Lauren holds an MFA in creative nonfiction from the University of California Riverside, and is a lifelong rider and writer. She writes as a way to explore life. She’s interested in the impact horses have on our lives as well discussing body positivity, mental health and addiction through personal narrative. She enjoys showing on the local hunter/jumper circuit in Austin, Texas.

Controlling the Uncontrollable with Horses