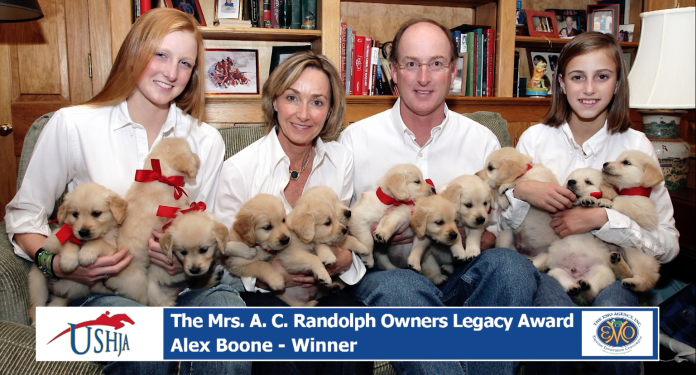 Lexington, Ky.—Dec. 5, 2021—The first day of the 2021 USHJA Annual Meeting, presented by Equicore, concluded on Saturday, December 4, with the annual Evening of Equestrians. USHJA President Mary Knowlton and Mike Lowry, Master of Ceremonies, presented awards to recipients virtually, honoring the outstanding members that are dedicated to the betterment of our sport.

Nine President’s Distinguished Service Awards were presented by Knowlton this year, acknowledging the outgoing Chairs of the Zone Committees and thanking them for their service. These awards recognize and honor the dedication and service by members to USHJA and our sport. The staff and President reviewed the programs of USHJA and the work involved in developing and implementing them and those individuals who have gone beyond the call of duty to bring our sport to a new level and to benefit our membership. This year’s recipients are Fran Dotoli, Mark Leone, Oliver Kennedy, Patrick Boyle, Nancy Jones, Clare Warren, Kathy Hobstetter, Edward Glynn and Dana Eaton.

“I get a chance to look across volunteers from all over the country and decide who has really knocked it out of the park for USHJA. This year I focused on our Zones,” said Knowlton. “We have so many of our Zone chairs who have served long enough that they have actually termed out as chair, and we want to focus on them.”

Dotoli, of Chepachet, Rhode Island, is the past chair of the Zone 1 Committee and the current chair of the USHJA Officials Education Committee, both of which earned her the 2020 Volunteer of the Year for her work last year. This marks Dotoli’s third President’s Distinguished Service Award honor after also earning recognition in 2016 and 2018.

Leone, of Franklin Lakes, New Jersey, has been involved in the sport for more than 45 years as a rider, trainer and owner. He has also served on many boards and committees including the North American Riders Group, the Zone 2 Jumper Committee Chair and as an athlete representative for the U.S. Olympic Committee.

Kennedy, of Brookeville, Maryland, served for many years as chair of the Zone 3 Committee. He is the owner of ESP Farm and the Capital Challenge Horse Show, as well as a Level 3 FEI Show Jumping Judge and USEF R Jumper Judge. He’s been involved with many USHJA boards and committees including as the Zone Jumper Council Vice Chairman and a member of the USHJA Board of Directors, Competition Management Committee and more.

Boyle, of Hampshire, Illinois, plays many parts within USHJA, including years as chair of the Zone 5 Committee. During that time, he has been instrumental in supporting opportunities for members from competitions to scholarships. In 2018, he was awarded the USHJA Volunteer of the Year Award for his contributions to the planning and success of the inaugural USHJA National Championships.

Zone 7’s Jones, of Little Rock, Arkansas, has been involved in the sport for more than 40 years as an owner and an “R” judge for Hunters, Hunter Equitation, Jumpers and Hunter Breeding. She has been active on the committee for many years, encouraging participation in USHJA programs and creating opportunities for members.

Warren, of Bellevue, Washington, served as chair of the Zone 9 Committee. She has been involved in the industry for more than 50 years and operates Archway Equestrian with her partners. She is also a USHJA Certified Trainer and serves on the USHJA Pony Task Force. She received a USHJA Local and Regional Riding Instructor Award in 2008.

Hobstetter, of Costa Mesa, California, served Zone 10 as co-chair and has spent many years giving back to the sport as a longtime member and previous chair of the Zone 10 Hunter Committee, earning a USHJA President’s Distinguished Service Award in 2011 for her efforts. Glynn, of Petaluma, California, served Zone 10 as co-chair. He is a rider and trainer and was previously co-chair of the Zone 10 Jumper Committee. Both Hobstetter and Glynn have been an integral part of the committee and supporting members in the zone.

Eaton, of Anchorage, Alaska, served as chair of the Zone 12 committee and was actively involved in supporting USHJA programs in the zone. She operates Eaton Equestrian Center, founded by her mother, in Alaska along with her sister, Britta, where she trains horses and students at the center.

Jill Cornforth, of Fairbanks, Alaska, and the newly seated Chair of the Zone 12 Committee, was awarded this year’s Volunteer of the Year award, the highest USHJA honor awarded to a volunteer. Volunteers are reviewed on new programs, continuing programs, the direction of our sport, and volunteers behind the scenes who work the long hours with a passion for bringing our sport forward and providing a safe, fair and understandable sport for our fellow equestrians.

“There is saying, ‘when the going gets tough, the tough get going,’ and tonight’s Volunteer of the Year is definitely the epitome of that statement,” said Knowlton. “Jill Cornforth sprung into action when I realized that we were not going to have a nominating committee for Zone 12—Alaska—because there weren’t enough people to serve on a nominating committee. Jill took matters into her own hands—she worked diligently, she got names, she interviewed people, she had the whole can-do spirit of Alaska and singlehandedly made sure that our governance committee had the right people to look at.”

The J. Arthur “Bucky” Reynolds, II Award of Merit is awarded posthumously for meritorious service to equestrian sport, dedicated to furthering the Hunter/Jumper and/or Hunter Breeding disciplines. The families and friends of Frank Willard, of Oak Ridge, North Carolina, and Kenneth Wheeler, of Keswick, Virginia, were recognized this year.

Willard was an esteemed USEF “R” rated judge, presiding over numerous prestigious events in his time in the judges booth. He also helped many top riders collect tricolors through his Deep River Farm in North Carolina, which he took over from his grandfather in the ’70s and proudly passed on to his daughter, Caroline.

One of the namesakes behind the USHJA Wheeler Museum, Wheeler was a legend in the sport alongside his late wife Sallie, together earning the American Horse Shows Association Lifetime Achievement Award in 1999. From their Cismont Manor Farm in Virginia, “Kenny” bred, trained and showed numerous AHSA/USEF Horse of the Year National Champions and Grand Champions, earning himself a spot in the National Show Hunter Hall of Fame.

The William J. Moroney Visionary Award honors an individual, group, organization or corporation deemed inspirational, influential and integral to furthering the Hunter and Jumper disciplines. Like the award’s namesake, the winner should have a keen ability to plan for the future, demonstrate endless passion and depth of knowledge of and for the Hunter/Jumper sport. They should offer innovative thinking at every opportunity and inspire others, as well as challenge them to their best at all times. This year, the award was presented to Mary Knowlton by Lowry.

Knowlton, of Freehold, New Jersey, has dedicated herself to the Hunter/Jumper sport in governance as well as in her own operation, Knightsbridge Farm in Colts Neck, New Jersey. In addition to serving as president of USHJA since 2016, Knowlton sits on numerous USHJA committees and is chair of the USEF National Breeds and Disciplines Council. In the barn, Knowlton has been a professional in the industry for more than 40 years and is a USHJA Certified Trainer, coaching riders of all levels from beginners to national level competitors. She is also a USEF licensed official, holding her “R” judges card for Hunter and Hunter/Jumping Seat Equitation and her “r” Jumper judges card.

Daniel Geitner, of Aiken, South Carolina, is the recipient of this year’s Dash for Cash Award, which goes to the rider earning the most prize money in $25,000 to $40,000 Grand Prix events that are held as the featured Jumper event at a licensed USEF competition.

The USHJA Lifetime Achievement Award honors members whose lifelong involvement in the sport has benefited the industry. Recipients have dedicated their lives to furthering the disciplines of Hunters and Jumpers on a national platform. This year’s recipients are David Distler, of West Palm Beach, Florida, and Carleton Brooks, of Encinitas, California.

Dr. Laurel Blakemore, of Williston, Florida, is the recipient of the USHJA Amateur Sportsmanship Award this year. The award recognizes an Amateur Owner or Adult Amateur exhibitor who displays excellence and integrity by supporting the sport, fellow competitors and volunteering his/her time.

The Mrs. A.C. Randolph Owners Legacy Award recognizes past or current owners who have been loyal patrons of the industry creating a legacy of giving back to the sport through dedication and support. For 2021, the award deservingly goes to Samuel “Alex” Boone, of Lexington, Kentucky.
Nancy Whitehead, of Richmond, Illinois, is this year’s recipient of the Jane Marshall Dillon Award. This award recognizes equestrians who have devoted their lives to teaching and mentoring riders beginning their education in the Hunter/Jumper discipline and following in the traditions of Jane Marshall Dillion.

Every year, young riders from each discipline apply through their affiliate organizations to be considered for the USEF National Youth Sportsman’s Award. Nominees demonstrate an ongoing commitment and dedication to USEF and USHJA by promoting the equestrian sport, demonstrating exemplary sportsmanship and serving as a role model for their peers. Carlota Goyeneche, of Key Biscayne, Florida, is this year’s USHJA Nominee for the USEF National Youth Sportsman’s Award.

Ryder Richardson, of Parker, Colorado, is this year’s USHJA Youth Leadership Award recipient. This award identifies potential future leaders in the equine industry and recognizes Junior members for their achievements.

The Licensed Official Emeritus Honorary Distinction honors licensed officials who have dedicated their lives to officiating our sport and have subsequently retired. For 2021, the distinction goes to Judy Richter, of Bedford, New York; Pauline “Cookie” Cook, of Katy, Texas; and Eleanor Woodward, of Germantown, Tennessee.