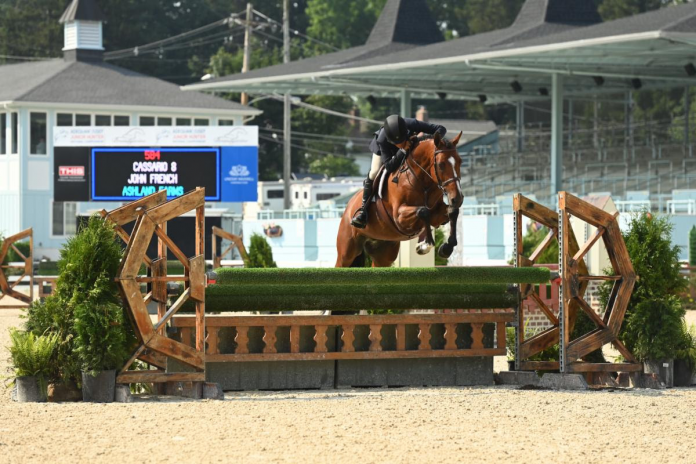 Lexington, Ky.—Dec. 16, 2021—Twelve new champions were honored as the Platinum Performance/USHJA Green Hunter Incentive Regional Championships expanded from five to six competitions in 2021. Tricolors were awarded in the 3’0”/3’3” and 3’6”/3’9” sections at championships held across the country from the East to the Southwest.

At the Southwest Championship, Leslie Steele of Calabasas, CA and Guess Who, owned by Irine Neuwirthm were named champions in the 3’0”/3’3” section. Joie Gatlin, of San Juan Capistrano, CA and Clover Lane Farm LLC’s Educated Guess took reserve. Victoria Lacagnina, of Santa Rosa, CA rode her own Positano to the tricolor in the 3’6”/3’9” section. Jamie Taylor, of Tarzana, CA and Ecole Lathrop’s Starburst took reserve.

The Oregon High Desert Classic 2 hosted the Northwest Championship, July 28-August 1 in Bend, OR. Nicole Stern, of Redmond, WA and her own Delegate took the top honors in the 3’0”/3’3” section. Nicole Dicorti Bush, of Soquel, CA and Imperial, owned by Taryn Jane, took reserve. In the 3’6”/3’9” section, Dezraye Choi, of Pacifica, CA and Eavan Bronfman’s Quax took the win. Reserve went to Sara Petersen, of Kingston, WA and Lily Swift’s Galileo.