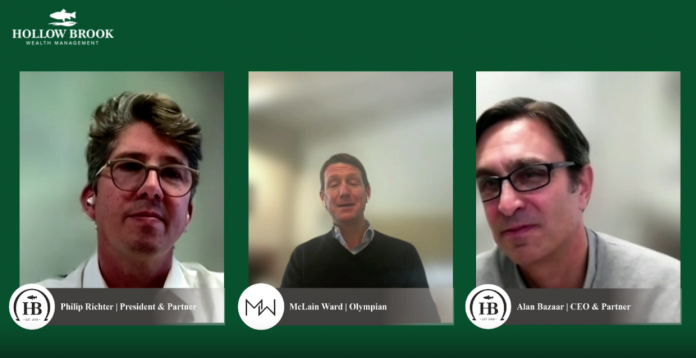 Philip Richter and Alan Bazaar from Hollowbrook Wealth management guided an intimate conversation with Ward on how he has achieved and maintained such a high standard of excellence and brought light to the inner workings of the business side of the sport.

Ward highlighted the importance of decision-making as he plans with the 2024 Paris and 2028 Los Angeles Olympic games as key goals. He discussed how there are both short- and long-term versions of these game plans, which get altered and adjusted as his team moves into the future.

Ward preached the importance of education, both academically and within the sport itself, and he explained how he likens his barn to a team-oriented organization. His organized structure is planned out to the day, week, month and year so that everyone is on the same page. He also exemplified the importance of his wife, owners and supporters at every level of the organization in making any level of success possible.

“Sport goals are always at the forefront and the business will follow,” said Ward. “If you are chasing the dollar, it will not work.”

Financial planning is a huge aspect of planning or looking toward an Olympic Games. Ward discussed how he has four-, six- and eight-year plans that lay the foundation for funding the acquisition of potential equine teammates. However, nothing is ever guaranteed. Ward stressed the importance of flexibility. He needs to have leeway in his long-term plans due to the potential for injuries to horse or rider. Other times, horses may not meet that potential.

The cost is another aspect that Ward touched on. “When you look at the top 20 riders, usually they come from normal finances,” said Ward. “There are not enough avenues for people to come up.” This means the spotlight turns to whether that person has enough characteristics to make it or if they have the mindset to punch through hardships. It takes a team of experts to do what Ward is doing.

Horse sport is growing; Ward compared it to race car driving, tennis and golf due—also individual sports. However, the hats that a rider has to wear are a challenge. Managing different personalities along with your own mental challenges, Ward asserted, is a hard pill to swallow.

The challenges that Olympic riders face are similar to those of athletes in other sports. However, the pressure and expectations come down to a uniquely small moment of time. In addition, dealing with another living animal presents its own challenges with injuries and mental state.

Ward was transparent when he shared that prior to 2008, he wanted to win so badly that he would often sabotage himself and come up short in competition. He got to a point where he was ready to work with a sports psychologist in 2008 because he knew he could be performing better.

Ward changed his business model from that of his parents; he focuses on locating talent and training.

His sporting goals remain at the forefront of his operation. Ward explained that competitive success results in better business in all the other aspects of the industry.

Ward stated that the equestrian industry is facing many of the same challenges as the business world. The financial crisis in 2008-2009 resulted in a decrease in breeding, which ultimately led to fewer available horses. As a result, many riders began taking on more clients instead of developing more investment horses. Today, the prices are strong, and finding a horse with potential means a bit of inflation in pricing.

It brought Ward back to his initial point: Planning is everything, in horses and in business.