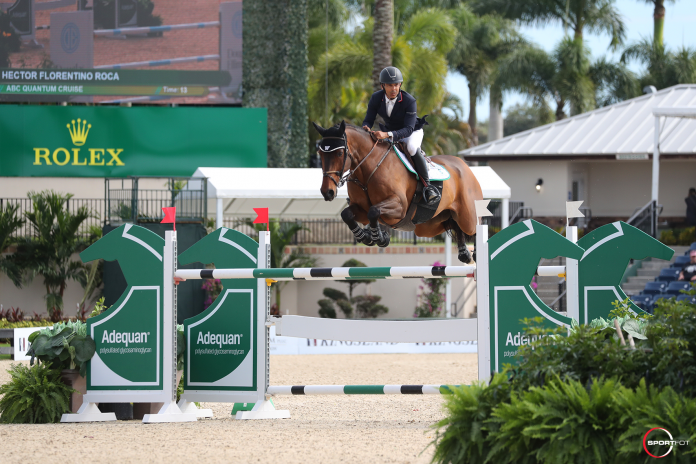 The opening Premiere week features nationally-rated competition through Sunday, January 9, with the feature classes including the $75,000 Battle of the Sexes, presented by Wellington Regional Medical Center on Saturday, January 8, at 7 p.m. as the opening event of the “Saturday Night Lights” series. The $75,000 Rosenbaum PLLC Grand Prix is on Sunday, January 9, at 2 p.m. Live streaming is available HERE.

In a 35-horse field, Florentino and ABC Quantum Cruise were one of five that advanced to the jump-off over a course designed by Eric Hasbrouck (USA). First into the jump-off were Jordan Coyle (IRL) and Centriko Volo, owned by Celtic Park LLC, who had a rail for four faults in 38.289 seconds for third place. The only other double clear round for second place came from Nicholas Dello Joio (USA) and Cornet’s Cambridge, owned by The Berry Group LLC. They finished the jump-off in 41.001 seconds. In the final spot in the jump-off, Florentino and ABC Quantum Cruise brought the winning time down to 40.495 seconds with a clear round.

It was a wonderful start to the circuit for Florentino, who has only ridden ABC Quantum Cruise for two months. The pair competed in November and December 2021 in Wellington after owners Ronnie Beard and Michael Dorman asked him to ride the horse – which previously competed with Harry Charles of Great Britain – as well as their second horse, Meadow Vale Cruise.

“I had another horse that belongs to Spruce Meadows, and my deal with them was up through the summer, going to Tokyo,” said Florentino. “God answered my prayers, and Ronnie called. I’m very happy to be back showing at WEF and to have these competitive horses.”

Florentino describes the 13-year-old Irish Sport Horse gelding (Obos Quality x Cruising) as “very brave, careful, and fast.” He added, “I don’t have to ask him to be fast; I actually have to ask him not to go so fast. This is our second jump-off together, and it felt very good. I take advantage because he has a favorite side. He likes to go left a little bit, so whenever there is a left turn, he can do that really fast, like to the last jump. Also, from [jumps] one to two, he got there really quick. He just covers the ground really quick. To the combination, I wanted to slow down because turning right to it was going to be harder. Even slowing down there, he was able to be quicker because he’s fast across the ground.”

Working also out of his own Florentino Show Jumping based in Wellington, Florentino achieved his “lifetime goal” of competing at the 2020 Tokyo Olympic Games. “Like any athlete in any sport, you want to go to the Olympics,” he remarked. “It’s the maximum event. It was a good experience and was a goal that I checked. Now the next one is to go and be competitive. I think it helps for my business too, that I have that on my resume. I like it when they say ‘Olympic veteran’ when I go to the ring! It sounds good.”

Later in the day, Roberto Teran (COL) rode his own Gabrovo to victory in the $8,000 Douglas Elliman Real Estate 1.45m Jumpers ahead of Wilhelm Genn (GER) on Bugatti and Nicole Walker (CAN) riding Atout des Trambles. In the $6,000 Bainbridge Companies 1.40m Jumpers, Alberto Michan (ISR) rode Firewall, owned by Eduardo Leon, to victory.