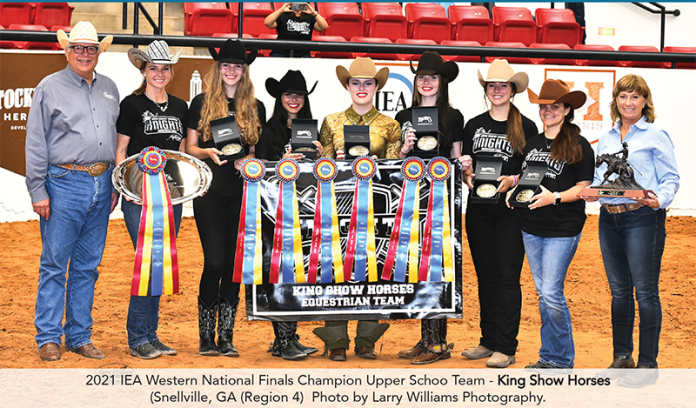 Details of the partnership expansion include:

“This partnership allows APHA to showcase our breed to a large group of Youth exhibitors, and for IEA to expose their fantastic competitions to Paint Horse members,” APHA Senior Director of Judges, Shows & Education David Dellin said.

“This is an important example of APHA’s commitment to the future,” APHA Executive Director Billy Smith said. “Along with hundreds of thousands of dollars paid out each year in scholarships, our relationship with IEA is the gold standard for Youth development.”

2021 marked the first year that IEA held their Western National Finals at the APHA World Show in Fort Worth, Texas. In celebration of their 20th Anniversary, IEA will host a combined National Finals on April 28 – May 1, 2022 with all three disciplines (Hunt Seat, Western and Dressage) at the Pennsylvania Farm Complex and Expo Center in Harrisburg, Pennsylvania.

“We are excited to return to Fort Worth in 2023 for Western National Finals,” said IEA Executive Director, Roxane Durant. “APHA has been very generous and welcoming, and we look forward to expanding our relationship as well as developing educational opportunities through APHA’s interactive equine learning platform, HorseIQ™.