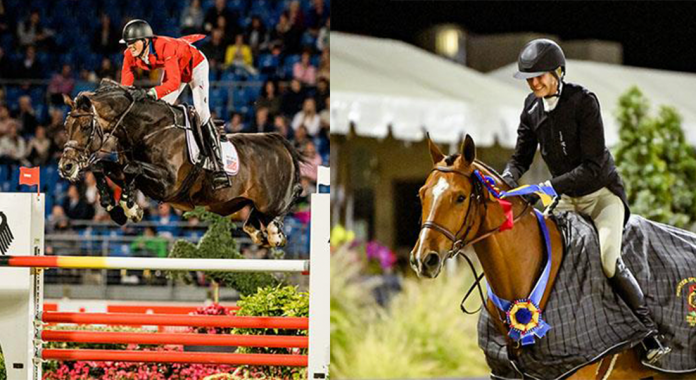 International Horse of the Year

Balou du Reventon, ridden by Brian Moggre and owned by Ann Thompson, had one of the most successful years of his jumping career in 2021, representing the United States in multiple international competitions and being short listed to the U.S. Jumping Team for the Tokyo 2020 Olympic Games. The Oldenburg stallion has had successful results with several international riders, but no success has come faster than with Moggre in the irons.

Following Moggre taking over the ride in 2020, the duo was selected to represent the U.S. Jumping Team at the Wellington CSIO4*, where the team took their first win of the 2021 season. The pair then represented the U.S. in FEI Jumping Nations Cup Poland CSIO5*, where the team finished seventh, before securing an impressive victory in the Longines 1.60m Grand Prix CSIO5*. The pair finished in ninth at the Rolex 1.60m Grand Prix at the Royal Windsor CSI5* before being named as a Reserve to the Tokyo 2020 Olympic Games Team. Moggre and Balou du Reventon were then selected to represent the U.S.at the prestigious CHIO Aachen in September, where they lifted the U.S. Jumping Team to their first gold-medal finish at the event since 2005 in the Mercedes Benz Aachen Nations Cup with their double-clear effort. To conclude their remarkable year, the pair capped the weekend with a thrilling second-place finish in the Rolex Grand Prix of Aachen, one of the most difficult classes in the world. In total, the pair were clear in five consecutive 5* Grand Prix classes in a row in 2021.

Thompson, Balou du Reventon’s owner, is a recipient of the Horse of the Year trophy and the Moggre family accepted a premium three-bottle gift pack of highly rated wine, plus an invitation to be a part of the exclusive wine club list, from Horsepower Vineyards.

National Horse of the Year

If Big Shot could write his autobiography, it would be a compelling read. He has been profiled several times and his 2021 competition record is all the evidence anyone would need to say that the horse, affectionately known as “Dude,” can back the claim of being a Big Shot. He returned to the show ring in 2021 after a serious metabolic disorder kept him out of competition in 2020. The partnership between “Dude,” rider Jenny Karazissis, and owner Dulcie Lou Morris has helped position him for recognition.

With Karazissis in the irons, Big Shot earned the title of champion or reserve champion in six out of the seven performance and high-performance hunter competitions they entered in 2021. Karazissis and Big Shot had several notable wins last year, including the $100,000 World Championship Hunter Rider West Coast Spectacular and four USHJA International Hunter Derby qualifiers.

Big Shot also competed with his amateur owner, Dulcie Lou Morris, while Karazissis competed him in the bigger divisions and derbies.

Morris, Big Shot’s owner, is a recipient of the Horse of the Year trophy and a premium three-bottle gift pack of highly rated wine, plus an invitation to be a part of the exclusive wine club list, from Horsepower Vineyards.

Watch the 2021 SmartPak/USEF Horse of the Year Awards Dinner Celebration on the USEF Network.

For more information on the 2022 US Equestrian Annual Meeting, visit www.usef.org/annual-meeting.