Home Blogs Jump Off How a Neglected, Broke Quarter Horse Turned Into a Young, Green OTTB... 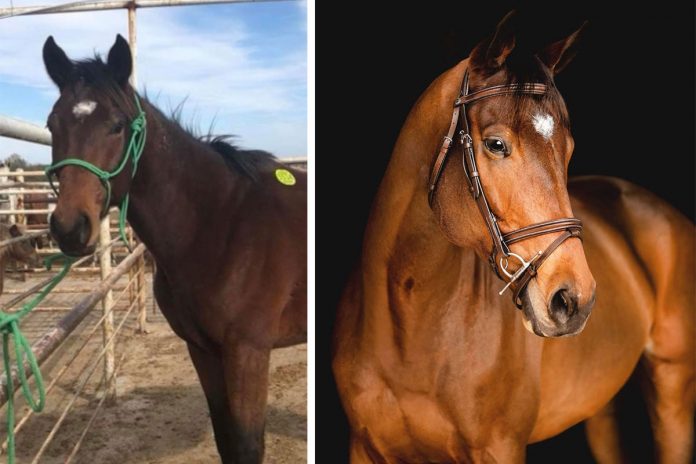 A green horse and green rider isn’t the brightest idea, but I lived to tell this story.

In 2017, I came across an advertisement for a horse that would be sent out to slaughter the next day. It was his last request for rescue. He was advertised as a 10-year-old “one hand broke” Quarter Horse. His somber eyes just did something to my heart so I hastily sent in the bail money for him. I had never owned a horse before and had been out of riding for 10 years. I must have been insane to frantically buy a horse off an online ad.

The horse arrived after 4 weeks of quarantine and I quickly learned that he wasn’t “one hand broke.” When the vet called and said he was actually 4 years old, I said “Sir, I think you have the wrong horse.” It turns out my aged Quarter Horse was actually a 4-year-old OTTB with two track starts.

He appeared to be dazed inside, had no personality, and was so meek. His eyes were filled with anguish and he walked so low and modest. He was underweight and had no muscle. His coat was wooly but very dull and he had a lot of cuts and bites on him. His feet were in horrible condition—in desperate need of a farrier. But even with all this, I quickly fell in love with him. What someone once saw as worthless became the world to me. We would grow and learn together. It was meant to be. I decided to name him Aventus, with Avi (ah-V) as a nickname.

When his training started, I quickly learned that not only was Avi not “one hand broke”—he was unrideable. He used to rear like nobody’s business and was deemed dangerous. I was told that he belonged “on a hook.” But I didn’t want to give up on him, so I tried and looked all over for help. I didn’t want to retire such a young horse and made it my mission to find him help.

I went through multiple trainers and barns. People would ride him, then say good luck and goodbye. I even took Parelli lessons with him to try and figure it out for myself. I finally found a trainer with a great amount of patience and understanding for him—Caitlin Houlihan at Pine Hollow farm in Parkland, Florida. She has been working with him for almost 2 years now, and he is completely transformed. He is pretty much unrecognizable and is the perfect gentleman (the majority of the time).

Avi has decided that he is a jumper; He loves to jump and consistently trains in the 1.0M-1.20M range. He has so much heart and tries so hard. He would be willing to jump the moon if you asked. He is getting ready to do some shows in the future and show off his skills.

Besides his skill as a jumper, Avi has the biggest personality in a horse that I’ve ever seen. He is extremely quirky and playful—a true comedian. It’s my favorite thing about him. Everyone that meets him is instantly taken by him. They can’t help but smile around him. He is so joyful and walks so tall and proud. His coat is gleaming and healthy. Although he has a lot of scars from his past on his body, it’s a reminder of where he came from. He has gained the much-needed weight and has a wonderful top-line and muscle now! His feet finally have a heel and look so much improved.

It’s been a journey of laughter, setbacks, breakthroughs, failures, and achievements. What a risk I took, but I’m so happy I did. Avi is definitely a horse of a lifetime.

Alexa Zanfardino is 30 years old and living in South Florida with her 3 French Bulldogs and her OTTB, Avi. She is a former vet tech with a ton of love and compassion for all animals. You can follow Avi’s journey on Instagram @journey.with.Avi