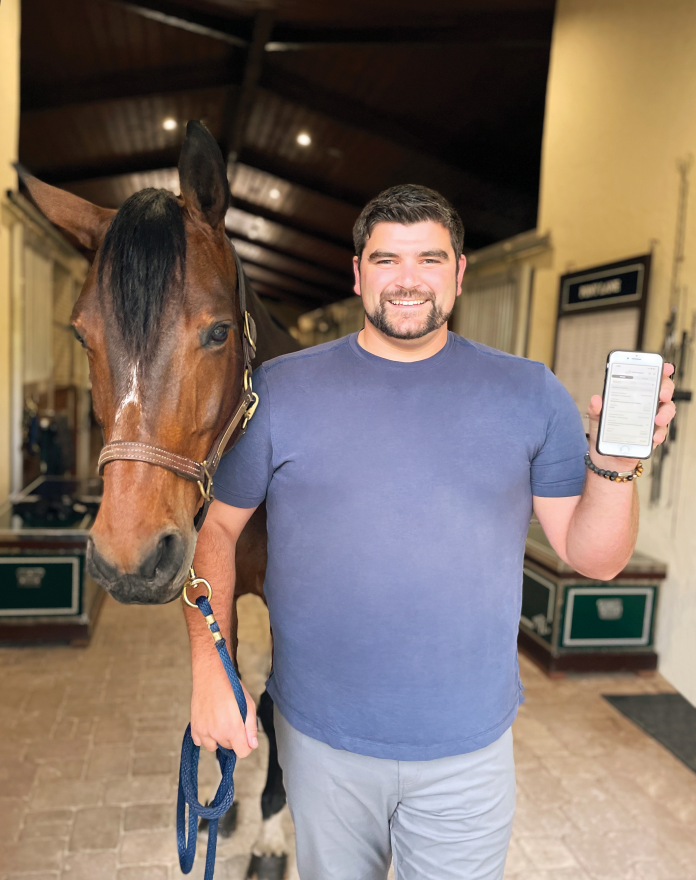 Michael Cruciotti is all about bringing innovation to the horse industry—from the creation of M.A.C. Sports International, LLC, to the launch of Jump Clear Fantasy, he aims to bring fresh, new ideas to the show jumping world.

Cruciotti has been involved in the horse world his whole life, with his mother, Cindy Cruciotti, and sister, Kelli Cruciotti-Vanderveen, having a strong influence on his desire to work in the industry.

“I remember talking to my mother about the lack of sports agents in the equestrian world. This is what set me on the path of creating M.A.C. Sports International and eventually Jump Clear Fantasy—the idea of helping to raise the profile of our sport so the athletes can warrant bigger and better sponsorships,” says Cruciotti.

He first began developing M.A.C. Sports International in his dorm room during his junior year of college, doing research to figure out the best way to market and represent equestrian athletes. Cruciotti taught himself how to build websites, learned about social media advertising, and eventually launched the company as a young entrepreneur.

“I developed a lot of key skills that really allowed me to promote Kelli, as well as work with other equestrian-related companies,” he tells The Plaid Horse. “We have grown to work with over 20 different companies and associations. I was able to find my niche in the horse industry—and from that I was able to meet my wife, Kelsey. I really meshed into the horse industry, and met a lot of key people who would eventually help me with Jump Clear Fantasy.”

Cruciotti recalls one crucial conversation with a mentor where he was told, “You’re never going to get these big-time sponsors because show jumping lacks one critical detail.” He realized then that despite the large following behind show jumping, not many people outside the industry followed the sport, and this is where Jump Clear Fantasy was born. While not gambling, Jump Clear Fantasy adds a gaming and fantasy component to show jumping to engage show jumping loyalists at a level the sport has never experienced.

“I spent the next couple of months thinking, and it finally dawned on me. Who wants to sit at an event for four hours to try and pick one out of 50 riders to win? What if you could place a bet on someone jumping clear? Rather than trying to pick one winner out of 50 riders, why not try to pick 14, 15, 16 different riders to jump clear and have a chance to do that every minute and a half? With the creation of Jump Clear Fantasy, we have created the world’s first, exclusive to show jumping, daily fantasy sports platform which allows users to be a part of the action.”

Jump Clear Fantasy has been programmed to make the process as simple as possible. Whether on the couch at home or ringside at the event, users will be able to place their picks and know the outcome immediately following the conclusion of the class. Entry fees can range from $10 to $200, but regardless of the fee, each user gets 1,000 points they use to make their picks. Based on the results of the class, users get points back in return—and whoever has the most amount of points wins the pool.

“Show jumping is very simple: Keep the jumps up and complete the course in the time allowed. That’s called jumping clear,” says Cruciotti. “With Jump Clear Fantasy, you can get into the action by picking which riders you think will jump clear and podium finish. Jump Clear Fantasy will be a true daily fantasy sport platform that allows users to test and display their knowledge and skill of the sport—and, not to mention, win cash prizes!”

“Just like walking into a casino, we have to make sure we verify all of our users. We’ve done a tremendous amount of work to ensure that anyone who uses Jump Clear Fantasy is over the age of 18 or 21 depending on the state, and also making sure that you are who you say you are,” says Cruciotti. “We’re not an offshore sportsbook. We are regulated in the U.S.—we’ve taken the necessary steps to be regulated and compliant. This is a solid platform that has done the work to protect its users.”

Cruciotti says that his goal for Jump Clear Fantasy is to bring visibility to the sport and all that it has to offer.

“I want Jump Clear Fantasy to be the catalyst that brings the world to show jumping. I want it to show the world that this sport has so much amazing talent, and that it’s for everyone—men, women, of any race, age, it doesn’t matter,” he says. “I want it to show people that the sport is interesting, and that there’s a way to engage without knowing a single thing about horses.”

*This story was originally published in the February 2022 issue of The Plaid Horse. Click here to read it now and subscribe for issues delivered straight to your door!