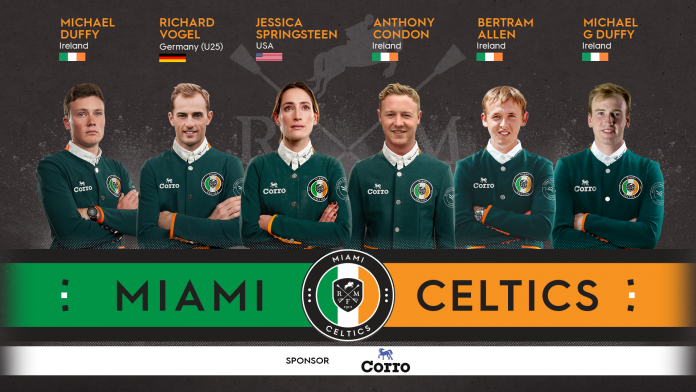 MIAMI, Fla. — The Miami Celtics have announced that Frank and Monica McCourt have franchised the acclaimed equestrian showjumping team for the 2022 season. The McCourts previously franchised the Celtics during the 2018 and 2019 winning-record seasons. Led by Olympic silver medalist Jessica Springsteen and managed by globally renown coach and trainer Helena Stormanns, the Celtics will compete in the Global Champions League (GCL).

“We are thrilled to be reunited with the Celtics and excited to support such an elite group of riders and their mounts,” said Monica McCourt. “This year’s team has the passion, dedication and skill to achieve extraordinary success and positively contribute to the expanding global equestrian community.”

This year’s Celtics team is sponsored by Corro, the e-commerce leader for equestrian retail. The Celtics will kick off the 2022 season at the Longines Global Champions Tour and Global Champions League competitions in Doha, Qatar (March 3-5).

“The Celtics are eager to begin a new season and excited to be returning to competition with the support of the McCourts and Monica’s dynamic leadership,” said Team Manager and Coach Helena Stormanns. “We have assembled a great mix of experienced riders with high-profile international victories and promising talent with the potential to win on the biggest stages in showjumping. Heading into the 2022 season, we are highly motivated to claim our first league title.”

Bertram Allen (Ireland): Irish Olympic rider Allen is presently among the top- 40 show jumping riders in the world. He will primarily compete with his Olympic mount Pacino Amiro.

Michael Duffy (Ireland): A stalwart of the Miami Celtics team, Duffy was also part of the Irish European Championship team in 2021. He will bring the very consistent Zilton and Jeff Ten Halven to the team.

Richard Vogel (Germany): Vogel is currently in the top five on the U25 list and the top 70 on the world ranking list.

Anthony Condon (Ireland): Condon is a successful Nations Cup rider and will be bringing SFS Vincomte to the team.

2022 competition dates will be updated here.