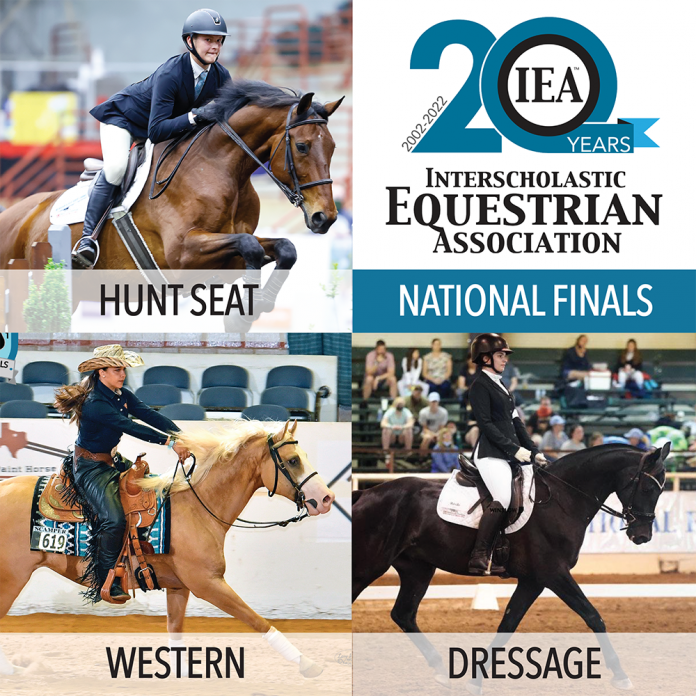 Columbus, OH – March 4, 2022 – For 20 years, the Interscholastic Equestrian Association (IEA) has provided opportunities for tens of thousands of youth equestrians to be able to compete at local, regional and national levels without the expense of owning a horse. On April 28 – May 1, 2022, the culmination of those twenty years will take place in Harrisburg, Pennsylvania at the Pennsylvania Farm Show Complex and Expo Center as IEA celebrates their 20th Anniversary with the largest IEA National Finals ever. The event takes place over four days of competition in two arenas simultaneously.

Nearly 800 of the nation’s leading middle school and high school equestrian athletes will travel from across the United States and converge in Harrisburg to compete for top honors in Hunt Seat, Western and Dressage classes, championship titles and collegiate scholarships. Of the 1,458 IEA high school and middle school teams from eleven zones across the country, over 600 teams will be represented at this year’s celebratory event.

Utilizing a unique draw-based competition format, riders in grades 4-12 will compete on unfamiliar horses in the following classes: Equitation over fences and on the flat, Western Horsemanship, Reining and Ranch Riding, Dressage Test and Dressage Seat Equitation. IEA riders must develop their catch-riding skills as very little to no warm-up practice is allowed before each class. All tack and horses are provided by IEA member teams and outside horse providers – allowing for a more level playing field of competition.

Judges for the IEA National Finals competition are as follows:

Complete live streaming of the IEA 20th Anniversary National Finals will be available online and offered at no cost to viewers through the IEA Website at www.rideiea.org. Video production is provided by Clip My Horse with support from the United States Equestrian Federation (USEF). Winslow Photography is the official show photographer for all arenas.

The IEA 20th Anniversary National Finals is free and open to the public for spectators. Media/Press passes are available to publications and news sources interested in attending and are coordinated though Kimber Whanger at kimber@rideiea.org.

For a complete listing of information including discipline specific prize lists, class schedules, and facility maps, visit the National Finals pages at www.rideiea.org.

Longines Masters of Paris: D-1 before the beginning of the competition