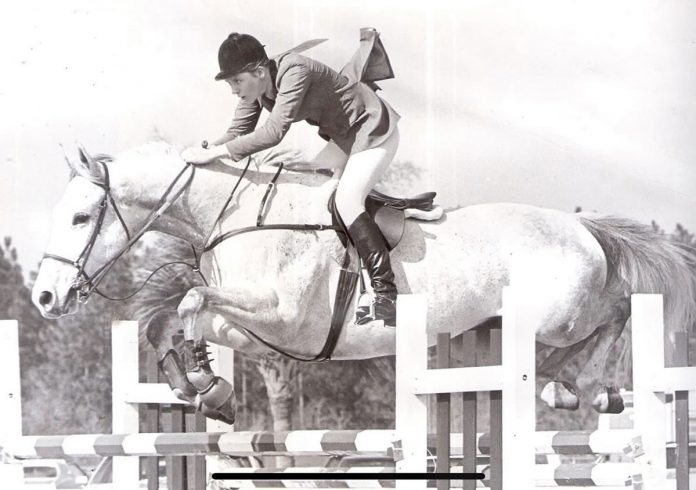 Miss Jessamy Rouson, a remarkable horsewoman, loyal friend to countless people and animals, author, and inspiration to many, died suddenly in December at her home in Keswick, Va while recovering from open-heart surgery. For those who didn’t know her, her life story was quite remarkable indeed. This obituary, written collaboratively by a few of her friends, will attempt to succinctly relate that story.

Jessamy was born in Staten Island, NY to John Henry Rouson, a decorated officer in the British Navy during WWII, and later a cartoonist and noted equine artist; and Jolita Rouson, an artist and writer. From a very young age, Jessamy was magnetized toward all animals. She would not hesitate to confront any person that she observed to be mistreating an animal.

Her riding career started when she decided to ride her family’s rescue dog, Bogey, around the living room. As Bogey was quickly outgrown, her father soon brought her to a riding lesson at Clove Stables near their home in Staten Island. Her first mount there was a Shetland pony named Cocoa, and her life path was set! She studied hard at school while all the time volunteering and eventually working at both Clove and another small stable in NYC. She helped with all manner of horse care and riding, putting in the blood, sweat, and tears necessary to form a solid foundation for becoming a true horseman. She graduated with honors from High School at the early age of 14 and began her professional riding career in earnest.

Jessamy was a determined young woman who knew her life would be fulfilled only if she could ride and be with horses. As a teenager, she was mentored by several national trainers, and as she matured, trainers in Ireland, Great Britain, and Germany contributed to her riding and training skills. Jessamy Rouson was an incredible equestrian and founded a well-recognized establishment, Showstock Stables, in Charlottesville, Virginia at the age of 18 years old. Jessamy had talent and provided inspiration to many up-and-coming riders as well as riding, training, and showing many horses.

Jessamy’s philosophy developed as she realized that for a rider, owner, or trainer it is not the horse’s responsibility to understand what we want—it is our responsibility to understand the horse. This is easier said than done. Jessamy initially purchased culls from the racetrack, learned to understand their mindset, trained them for the discipline best suited their personality and ability, and sold them for a considerable profit. This was the formula on which her sales business in the early years was founded. In the process, she was saving the lives of countless racehorses at the end of their time on the track. Sadly, this is a lost art in this day and age, which has left many thousands of horses bred for racing, with little hope at the end of their careers. Quite possibly the most famous of Jessamy’s track converts was Philco. After a rocky re-start, he went on to reach international fame as a top horse for the legendary rider David Broome of Great Britain.

As the years went on, she also established a breeding farm with several acclaimed, winning performance stallions. Many of her horses became nationally and internationally famous with several becoming Hall of Fame champions. A few of the other noteworthy equine superstars Jessamy brought to fame over the years, were Dreamy Sam; Chanel; All The Gold; Matadora; The Silver Baron, and numerous others. Of all of them, Matadora might have presented the most remarkable story. Jessamy found this scrawny and vicious mare huddled miserably in a dark stall at the very back of a well-reputed European sales stable. The staff at this establishment gave her a wide berth, to say the least! After making an effort to win her over in the stall, and seeing her unchanneled athleticism under saddle, a deal was struck. The horse sent to Virginia, and with Jessamy’s expert and patient caring handling, she rose to Grand Prix stardom.

Another incredible turnaround story is that of a horse named Boysie II who had been one of the top-earning Grand Prix horses in Europe. Unfortunately, he fell into the wrong hands and was completely broken down as a show jumper, racking up refusals and earning a reputation for ditching his riders at C in every triple combination. He was offered to Jessamy for cents on the dollar as his owner was quite eager to move him along! With love and patient care and training, Jessamy figured out the source of the problem and brought him back to the Grand Prix ring once again where together they enjoyed much success. He lived out his years on Jessamy’s farm and was ultimately buried there. That was the deal she made with him when she started the process of his turnaround!

In 1998, Jessamy walked into the SPCA shelter for her county looking for some barn cats and was horrified at the almost 100% euthanasia rate. But almost more so, at the careless and reckless disregard with which the animals were handled. She immediately pledged to turn this situation around, and soon formed Animal Haven, a 501C3 non-profit rescue for dogs, cats, and anything that breathes, right out of her farm. Even more significantly, with her dedicated input and urging, as well as marketing to the local community, the shelters in both of her local counties were evolved into No-Kill shelters, saving the lives of thousands of animals.

In addition to her great work on behalf of animal welfare, Jessamy has also generously taken in many down and out professionals, into her own home, and business, when they were in desperate situations. Sadly, her great life’s work and accumulation of success were eroded by a combination of long-term health issues, and legal issues brought upon her by some dishonest and dishonorable family members. This wonderful lady had a very difficult and challenging last few years leading up to her death, but that never deterred her from maintaining a positive and loving attitude toward life, her friends, and animal companions.

We, her friends, believe that the best gift that we can give her as a celebration of her life, would be to continue to disseminate the great information and training techniques she embodied during her equestrian career. And more than anything, to treat our four-legged companions and partners with the utmost respect and care. We conclude this writing by citing one of her favorite quotes from Sir Winston Churchill:

And two of her own quotes:

“A horse does not care what you paid for him. They only care about the bond that they form with a person. If someone gave too much money for a horse, that is not the horse’s problem – it is their problem. A horse does not set his own price tag. It is all on the humans and their sometimes unfortunate misjudgment and ignorance.”

“Open your heart, Save a life and see how that life can save you. That is From Where My Strength Lies. That is why I became a Horse Whisperer”

For anyone who has an interest in either her fascinating life story, or how to become a better rider, trainer, and owner of horses, in every manner, her books are as enjoyable as they are informative, and are a wonderful addition to the library of any serious equestrian. Jessamy wrote her three books before departing this world in order to inspire other horsemen and horsewomen to consider each horse a unique individual which requires understanding, compassion, empathy, and correct training techniques.

“Jessamy Rouson was one of the most extraordinary horsemen I ever had the privilege to know. Back in the hay day of Thoroughbred horses in the jumping disciplines, no one had better instincts for picking Thoroughbreds off the race track, training them for the sport, and selling them to the right riders. Her first book, “From where My Strength Lies-The Life Of A Horse Whisperer” chronicles the incredible volume of horses she selected and their success.An amazing read that I couldn’t put down! Jesse was not only influential in the lives of many OTTB’s  but the careers of their riders as well.” – Bernie Traurig

Alex Jayne on Making Horses and Shaping the US Industry