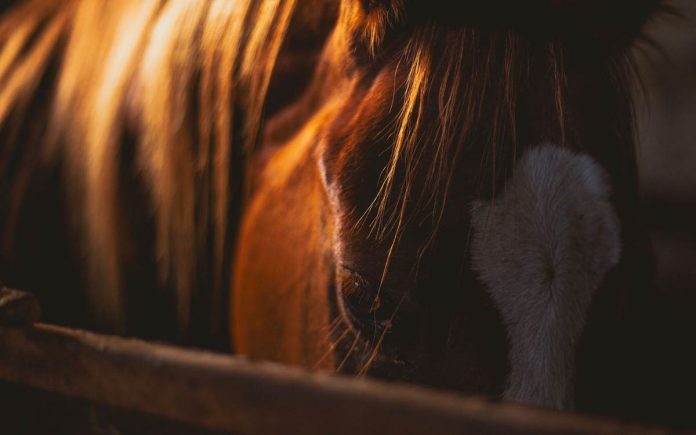 In a thundering blur of colorful silks and swirling dirt, Affirmed crossed the finish line at Belmont Park, securing his legacy as one of the greatest racehorses in history. On June 10, 1978, he became the eleventh horse to win the Triple Crown.

Twenty-two years later, Affirmed’s granddaughter faced a much different fate. After spending most of her life passing along her genetic legacy as a broodmare, the bay mare known as Fudge Ripple was discarded at an auction. Since she could no longer produce promising foals, she was deemed disposable. Purchased by a kill buyer, she was in danger of being slaughtered for meat. Luckily, Unbridled Thoroughbred Foundation intervened and purchased the mare, saving her from a cruel fate.

According to the National Thoroughbred Racing Association, approximately 7,5000 thoroughbreds are slaughtered for human consumption each year. However, it’s not just horses in the racing industry facing this cruel fate. Currently, every horse in the United States is just one bad sale away from being slaughtered. This means that show horses, Amish work horses, and family pleasure horses are all in danger of ending up in the slaughter pipeline. According to the ASPCA, 83% of Americans oppose horse slaughter. Yet this horrific practice continues today.

While horses are no longer slaughtered in the United States, they are still at risk. U.S. horses sold into the slaughter pipeline are transported to slaughterhouses in Mexico and Canada. In 2020 approximately 36,885 U.S. horses were shipped for slaughter according to the nonprofit organization Return to Freedom.

Dangers of the Horse Slaughter Industry

Horsemeat poses a formidable danger to humans. Horses are not raised for human consumption in the United States. As a result, horses are often given numerous substances during their lifetimes that are dangerous to humans. For example, horses are often treated with phenylbutazone, an anti-inflammatory drug commonly known as bute. The U.S. Food and Drug Administration bans bute from foods for human consumption. The horse slaughter industry not only sentences horses to brutal deaths, it also endangers humans’ health.

Horse slaughter advocates claim slaughter is necessary in order to cope with unwanted horses. However, slaughter does not need to be an option. Officials at Maryland Equine Transition Service estimate that over 90% of horses in the slaughter pipeline are in good condition. Horse rescue groups have successfully rehabilitated and rehomed unwanted horses. Additionally, animal welfare groups have partnered with veterinarians to provide humane euthanasia for horses in dire health. In short, there are humane alternatives that make horse slaughter unnecessary.

How Can You Save Horses from Slaughter?

U.S. H.R. 3355/S. 2732 Save America’s Forgotten Equines Act, also known as the SAFE Act, would permanently ban the slaughter of U.S. horses for human consumption. This legislation would outlaw the sale, purchase, and transportation of U.S. horses for slaughter.

How can you support the SAFE Act?

Encourage your friends and family to learn about and support the SAFE Act by sharing this article.

Many horse rescues like Unbridled Thoroughbred Foundation intervene in the slaughter pipeline by outbidding kill buyers at livestock auctions, rehabilitating horses, and offering them sanctuary or adopting them out to new homes. If you are able, consider donating your time or money to one of these rescues. Or you can help raise awareness of these organizations’ work by sharing their messages on social media.

Today Fudge Ripple is living out her twilight years as a beloved member of a sanctuary herd. No horse should face the horrors of the slaughter pipeline. Please act today to support the SAFE Act and protect U.S. horses from slaughter.

Michelle Murray is a writer and equine advocate who credits a sweet chestnut mare named Lady for making her a horse girl at the age of five. She rediscovered her love of horses as an adult and enjoys being regularly bested by ten-year-olds during her weekly beginner riding lessons.

Get Excited About the New Secretariat Memorial in Lexington